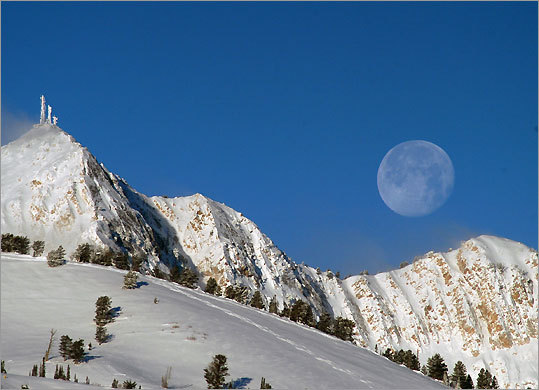 OGDEN, Utah - On our second day high in the Wasatch Range, my sons were starting to feel comfortable in the shin-deep powder on their inaugural trip out West.

"Let's dip in here," said Tommy, 9, looking down a double-black diamond glade off the John Paul trail. "This looks awesome."

So down we went, 11-year-old Luke leading our pack of three, picking his way through the trees on the steep decline at Snowbasin, home of the downhill races in the 2002 Winter Olympics. We had come to see if the boys' skills, developed since they were in diapers on the steep, icy pitches around our tiny New York hometown, would serve them well on the big mountains.

They were quickly at home at 9,000 feet above sea level, discovering the joys of skiing the glades and the wide-open bowls at two of Utah's lesser known areas, Snowbasin and Powder Mountain, outside Ogden and about 35 miles north of Salt Lake City. I had skied them a year earlier, declining to go east of Salt Lake, where Deer Valley, Park City, The Canyons, Alta, and Snowbird remain top destinations for skiers and snowboarders.

Without much on-mountain lodging and no resort community at the lifts, Snowbasin and Powder have been overlooked by vacationers seeking more après-ski action and ski-on, ski-off accommodations. However, these resorts are becoming increasingly popular for those looking for untracked powder and some of the best deals on lift tickets.

To experience the low-key, funky charm of Powder Mountain, consider visiting in the next few years. Developers have proposed a resort with a golf course, new lifts, four hotels, and as many as 1,200 housing units. To get around local opposition, they established the town of Powder Mountain last year in what used to be part of Eden.

Plans for lodging at Snowbasin remain on the drawing board. But what it lacks in lodging is more than made up for in terrain and skier amenities. Outside Magazine ranked the resort the fifth-best in North America, based on snow quality and terrain, behind only Alta/Snowbird, , Vail, and Jackson Hole.

One of the nation's oldest ski resorts, Snowbasin was purchased in 1984 by oil magnate Earl Holding, who also owns Sun Valley. In the mid-1990s, Holding played a big role in Salt Lake City's bid to win the 2002 Winter Games, promising a $100 million investment in the area that would host the downhill and combined competitions. Salt Lake City got the games, and Holding made good on his promise.

On our first day, we met Stew Marsh, ski school director for Snowbasin's First Tracks program, which takes skiers out for an hour before the lifts open to the public. We weren't there for a lesson, but Marsh, who was at Alta for 30 years before coming to Snowbasin in 2006, taught without teaching. He had the boys follow him down Wildcat Bowl, that natural half-pipe, making big, swooping turns, feeling their speed, and finding their rhythm as they floated through 4 inches of fresh powder. Over the next two days we graduated from the mellow terrain in Ogden Bowl to black diamond trails.

On our third day, we headed to Powder Mountain, with 6,500 acres of skiable terrain. With only one high-speed lift, a quad, double, and triple chair, Powder lacks the uphill capability of Snowbasin. But its terrain sprawls from several ridges, and we were able to find fresh powder more than a week after the last snowfall. Its Snowcat service up Lightning Ridge - at $12 a ride - opens up more terrain from 9,100 feet. This season, Powder is expanding its Snowcat Safari program, which takes up to 10 skiers with guides, at $300 a day, to terrain outside the ski area's boundary.

Powder Mountain is a good value, with $56 daily lift tickets and $48 multiple-day tickets, which can be used anytime during the season. Snowbasin tickets are $63, a far cry from the $83 ticket at Deer Valley. Even better bargains can be found at Diamond Ski and Sport in Eden, which offers discount tickets at Snowbasin and Powder.

Skiers typically stay in rental homes or condominiums in Eden or Huntsville. Others stay in Ogden, which has been energized by the relocation of several ski companies, including the makers of Salomon and Atomic skis. We stayed at the Marriott Ogden, 17 miles to the west of Snowbasin and accessible in a half-hour to the slopes by car or hotel shuttle. This season, a couple can stay at the Marriott for $209 a night, which includes breakfast and two lift tickets a day at Snowbasin or Powder.

The Marriott stands in the heart of the revived downtown. An entertainment complex called the Salomon Center had plenty for two boys who still had energy to burn after a full day on the slopes. After spending a half-hour in a FlowRider wave pool, we headed upstairs to the IFly, an indoor skydiving concession. There, they suited up in helmets and kneepads to experience the feeling of being airborne in a vertical wind tunnel. Then it was off to bed so we could get up early for another day on the mountain.

David McKay Wilson can be reached at davidmckaywilson@aol.com.