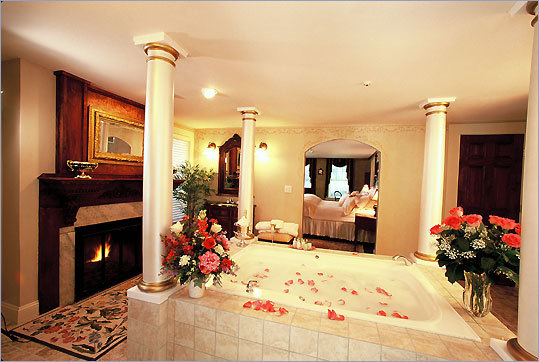 What makes for a romantic ski weekend? My female friends say they look for a wonderful location near a big resort, good food and wine at the inn or nearby, a luxurious room with high-thread-count bed linens and down comforters, and as one friend put it, "360 degrees of aesthetically pleasing."

A male friend said all he needs is his wife. My husband concurs, although he did mutter something about a ballgame and big-screen TV before I swatted him with a pillow.

For me, it's a weekend uninterrupted by the constant refrain of "Mom!"

While romance is never guaranteed, each of these five inns in Vermont provides the ingredients: in-room fireplaces, whirlpool tubs for two, and sinfully comfortable king or queen beds.

Reluctant Panther Inn (near Stratton and Bromley): This establishment in Manchester Village is as much a country inn as a luxury hotel. This is apparent upon check-in. Hand-painted murals depicting Manchester's more notable structures subtly decorate the walls in the reception area.

Throughout Reluctant Panther's three buildings - the main inn (completely rebuilt after a fire in 2005), the circa 1860s Mary Porter House, and Carriage House - owners Liz and Jerry Lavalley achieve a well-balanced mix of Colonial furnishings with modern amenities. Each of the 20 rooms has at least one fireplace (either gas or wood-burning), flat-screen TV, wireless Internet access, Keurig coffeemaker, hydrotherapy spa tub, king bed with feather beds and luxurious linens, and microfiber robes. Pre-order champagne or chocolate-dipped strawberries, and they'll be waiting in your room.

The Panther Suite is the inn's signature room. The bathroom's centerpiece is a double-size whirlpool tub set off by four columns. A wood-burning fireplace is on one side, a two-person rain shower on the other.

"We wanted it to be more than you would ever have at home," says Jerry Lavalley.

The inn's restaurant alone is worth the stay. Executive chef Justin Dain came from the Boston Harbor Hotel and creates such delicacies as shrimp and chive tortello and Zinfandel braised beef short ribs.

The bustle of outlets is a mile down the road in Manchester Center, and Bromley and Stratton mountains are a few minutes away. But the inn's rooms are so spacious, comfortable, and tastefully furnished with antiques, you might be tempted to forgo skiing and shopping.

From the outside, it resembles a country manor. Inside, it is modern yet classic, intimate yet open, and comfort is paramount. The sofa in the lobby invites a nap, and the high-ceilinged breakfast room, with chandeliers and three walls of windows, resembles a ballroom, but the candlelit tables are set only for two.

Jordan and her innkeepers, Suzanne and Stephen Vazzano, attend to small details, such as placing a birthday card and small chocolate cookie-cake in a room before a birthday guest's arrival. Each of the nine rooms overlooks lawns, gardens, and woods, and has a king bed and oversize whirlpool tub, gas fireplace visible from the bed and bath, flat-screen TV, Wi-Fi, and a spacious, uncluttered feel. Couples in-room massages can be arranged.

"Everything is geared toward couples," says Suzanne Vazzano.

While the inn does not serve dinner, the Vazzanos prepare evening hors d'oeuvres, and a small kitchen off the lobby remains open with snacks and beverages for those overcome by midnight munchies. The lobby features a central stone fireplace surrounded by soft sofas, a pool table, and game tables for two, with checker and cribbage boards, and cards.

Guests can borrow snowshoes and trek around the inn's 10-acre property or toboggan down a short hill.

Staying here feels like a honeymoon, even if you're already married. Or not.

Pitcher Inn (near Sugarbush and Mad River Glen): The Pitcher looks as if it has stood grandly in the village of Warren since the mid-19th century. But the inn is only 15 years old, reconstructed after a fire destroyed the original structure in 1993. "The challenge was to build a new building in a historic location and not make it look brand new," says Ari Sadri, general manager.

They succeeded, and decor such as Morris chairs, leather sofas, leather-inset and marble-top tables, and Hudson River School landscape paintings lend an understated old-money ambience to the public spaces. You half-expect Calvin Coolidge to saunter out of the small library, where Amherst College prints line the walls.

While the inn was restored to its Colonial charm, the architect had fun with the nine rooms and two suites, all designed around a Vermont theme. The School Room has a blackboard wall, natural wainscoting, and old wooden school desks, while the Lodge Room features a giant bed that looks like a pharaoh's throne sitting beneath a starry evening sky.

Then there's the whimsical and popular Trout Room. With its tree-like columns rooted in stone cutouts in the floor, a river-rock fireplace, and a ceiling ribbed like the bottom of a boat, the room could be an elegant campsite.

But for a romantic weekend, don't book the Colonial Room. Although its twin beds can be replaced by a king, it feels too much like your grandmother's guest bedroom.

A Relais & Châteaux property, the Pitcher Inn emphasizes the five C's: calm, cuisine, character, charm, and courtesy. To that list, add another: comfort. Next door is the full-service Alta Day Spa.

Birch Ridge Inn (near Killington): Separated from busy Killington Road by a quirky covered-bridge-like carriageway, the Birch Ridge Inn is an oasis of calm. Once a four-bedroom executive retreat, the inn's primary architectural feature is two connected A-frames. In 1997, Bill Vines and Mary Furlong purchased the property, added a wing with six more rooms, and opened it as an inn.

While modern, the rooms are appointed with classic furnishings: sleigh or four-poster beds, maple armoires, marble-topped side tables, and TVs hidden behind sliding tapestries or paintings, and even a rotating dollhouse. The six rooms in the newer addition have gas fireplaces and whirlpool tubs in spacious bathrooms.

The innkeepers eagerly impart local knowledge - how to find fresh snow at Killington a day or two after a storm, and where to pick up a quick burger and fries before the drive home. They also do whatever it takes to make guests' stays memorable.

"One year, I put a Christmas tree in the corner of a room for a couple," says Furlong. "The whole idea is for them to go away from Killington wowed."

Besides its quiet location, the inn is known for its small, elegant restaurant. Chef Stephen Byrne specializes in fusion of American and Continental styles, served in a dining area in one of the A-frames. The inn's intimate bar is in the other A-frame. Order a Cape Codder or cosmo and ask Furlong about her former life as a quality-control engineer for .

Inn at Water's Edge (near Okemo and Killington): North of Ludlow on scenic Route 100, the inn sits on a four-acre knoll at the south end of Echo Lake. Drive up the maple-lined drive, park near the gazebo, and step back in time.

The gabled Victorian was restored by innkeepers Tina and Bruce Verdrager and feels like a favorite aunt's country home. It defines country charm. Every room - complete with period wallpaper and some with original parquet floors - showcases antiques that the Verdragers have collected, including an elaborate coal-burning stove near the reception area.

The converted sheep barn off the back of the house is a welcoming English pub, with a dark mahogany bar imported from a former pub in London's financial district. The spacious pub has booths for cozying up - with each other and an après-ski hot buttered rum or Irish coffee.

Behind the inn, a short path through an old-growth pine glen leads to the shore of Echo Lake.

The 11 rooms are cozy and also furnished with comfortable antiques. Rooms in the original house have wide pine floorboards, and six rooms have gas fireplaces that resemble small woodstoves. Most rooms have whirlpool tubs, and only one room has a TV.

If you can't find romance here, then maybe you are the big-screen-TV-ballgame kind of guy.

Peggy Shinn can be reached at Pegm@highmeadow.com.