Forget the toboggan of your youth: Sleek high-performance sleds are built for speed, maneuverability 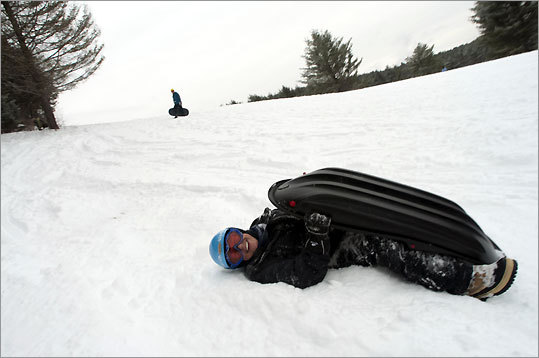 STOWE, Vt. -- "High performance" is not a term I usually associate with the most childish of winter sports, but Joe Henry, Umiak Outdoor Outfitters retail manager, was ready to disabuse me of my preconceptions about sledding. In fact, Umiak sells - and more typically, rents - three radically different high-performance sleds.

"They're adult toys," Henry said. Just like kids' sleds, the new-wave equipment gets you from the top of the hill to the bottom, but the ride is a whole lot more memorable. That two of the three products come from Vermont companies should be no surprise.

"Winter is long here," Henry said, "unless you have fun stuff to do."

Most people I know in Stowe ski, snowboard, or snowshoe - or all three. High-performance sledding seems like a natural next step. Many of us have fond memories of the old Flexible Flyer, but there's no denying that old-fashioned sled's shortcomings: narrow iron runners that sink in soft snow, unforgiving wooden slats that make bumps and jumps feel like a WWF Smackdown, and unresponsive steering that makes sledding among the trees a suicidal act. These new sleds address all those shortcomings, and they're far lighter when you're hauling them uphill.

Henry sized me up and encouraged me to rent an Airboard, an imported sled favored by baby boomers for its cushy ride. It deflates and folds flat for tossing into a rucksack. Once inflated, it's a fat delta wing of a pillow made of the same puncture-resistant material as a whitewater raft. The bottom side of the Airboard has plastic channels that grip the snow and give the sled surprising maneuverability.

I was already sold on the Hammerhead, which is a beautiful piece of design that looks as if it emerged from a computer-aided program that morphed the old-time Flexible Flyer, a webbed-deck snowshoe, and a snowmobile without the engine into a light, sleek machine with super-steerable front skis mounted on a flexible bar. "It's the white-wa ter kayak of sleds," Henry said.

He explained that riding the Airboard or the Hammerhead was largely intuitive. Then he pointed to the other Vermont-made sled, the Mad River Rocket. "This one has a bit more of a learning curve," he cautioned. The sled is not as sleek and elegant as the Hammerhead, and at first glance resembles some of the plastic sleds that stacks up next to the plastic snow shovels and barrels of sidewalk melt. But the design gives it amazing capabilities, especially in soft snow. Rather than sit or lie on it, the Mad River Rocket requires you to kneel, with a strap across your calves. "This was really created for sledding down hills in the woods," Henry said. "We have a lot of wooded hills around here."

He popped a demo disk into the DVD player and I watched in amazement as sledders came whipping through the woods, shooting over ledges, performing acrobatic twists and turns, even executing somersaults. "Anything you can do on skis or a snowboard you can do on the Rocket," Henry said. I muttered something to the effect of "not if I can help it." But I wasn't ready to be relegated to the baby boomer sled and decided to test all three to see which was the best match for me.

Before I left the shop, I had to sign a release form that more or less said that if I broke my neck it wasn't Umiak's fault. I replayed the Mad River Rocket demo in my head and signed anyway.

Most ski areas do not permit sledding, so one key to the sport is finding a good sledding hill. (The upside of the ski-area ban is that sledding ends up being economical.) Henry and his friends are fond of driving up to where the road to Smuggler's Notch is closed over the winter, hiking up to the top, and then sledding down. They even do it at night on Hammerheads, which can mount optional headlights. But for us novices, Marshall Hill behind the Stowe Elementary School, the "town sledding hill," offers a fairly steep slope with an elevation drop of about 100 feet. That doesn't sound like much, but it looks a long way down from the top.

"Just remember that you don't have to go all the way up," Henry cautioned. "And be sure to scope out the hill for little dips or jumps the kids have built."

On a single-digit morning with about 6 inches of fresh powder, I had the slope to myself so I could take my first runs without humiliating myself in front of a bunch of 12-year-olds.

The Airboard was a natural for a first run. It skidded along the snow behind me as I climbed about halfway up the hill. But once I turned it around and flopped on top, the Airboard went plowing through the powder like a well-padded piece of iced cardboard (my childhood substitute for a toboggan). I was at the bottom in seconds, so I took it all the way up and tried again, this time grasping the handles on each side of the point to use the channels for steering. It was almost as responsive as a big boat - which is to say that it changed course, but not fast enough to steer around any obstacles. Fun, but tame.

Other sledders were beginning to arrive when I switched to the Hammerhead. Again, a belly-flop run from mid-height on the hill was over before I could adjust my safety helmet to see where I was going. A sit-down run (steering with my feet) from higher up was far more successful. As long as there was enough give to the snow to allow the edges of the front skis to bite the surface, the Hammerhead was eminently maneuverable. And fast.

After a few runs, I was ready to begin my "learning curve" on the Mad River Rocket. If the Airboard is a cushy ride on a fast pillow and the Hammerhead is like riding a bobsled that you can actually steer, the Mad River Rocket was a little like riding a bicycle without touching the handlebars, and a little like handling a sea kayak in modest surf.

Several busloads of teenagers had arrived at the hill, and they were hurtling down on everything from snowboards to plastic sleds to flying saucers to an old-fashioned wooden toboggan with five people packed on. At the bottom of the hill, a ragtag bunch of non-sledders was playing touch football. There was no escaping an audience.

Fortunately, the black plastic shell of the Mad River Rocket doesn't garner a lot of attention. I climbed halfway up the hill and deliberately stepped off to a side where no one had been sliding. I remembered Henry's warning that the sled was at its best in soft powder. I knelt and strapped myself in, hopped to twist so I was headed downhill, and - whoosh - I was off so quickly that I seemed to leave sound behind. This sled is an aptly named speed demon. In the sudden silence I was already down the hill and streaking across the field.

I walked back up and tried sliding through powder carving turns. I held the edge of the sled, tilted my body like turning on a bicycle, and shifted my weight from one knee to the other, rather like pushing turns in a kayak. The sled followed every movement. It seemed too good to be true.

Emboldened and exhilarated, I took the Mad River Rocket all the way to the top, waited until I had a clear hill, and sent myself down on a tangent, carving turns first one way, then the other. Then I crossed the hard-packed snow where everyone else had been sledding and the channels in the bottom lost their grip. I went over sideways and instinctively tucked my head down in the kneeling position, bounced once on my back, rolled sideways again, bounced on my back again, and somehow managed to come upright and pointed downhill to complete the run. The football players applauded.

When I walked in stiffly to return the sleds at the end of the day, Henry asked how it had gone. I explained my inadvertent sideways double somersault without catching any air. He laughed. "Around here we call that a dinner roll," he said, a mocking reference to freestyle skiing hotdog Jonny Moseley's signature trick.

Moseley does it without bouncing off the slope.

David Lyon can be reached at harris.lyon@verizon.net.