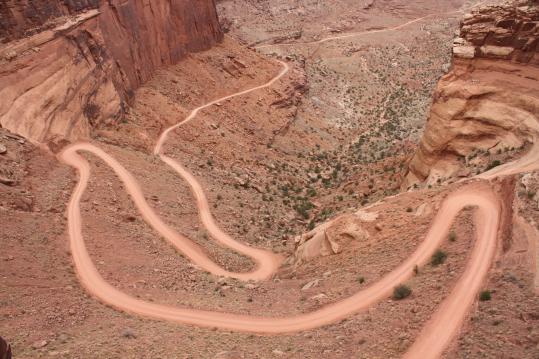 The steep hairpin turns of the Shafer Trail lead from Canyonlands National Park down to the White Rim Trail. (Selina Kok for The Boston Globe))
By Diane Daniel Globe Correspondent / May 13, 2012
Text size – +

MOAB, Utah — “Do you know the trails here?” a woman called out from a station wagon with Colorado plates and three bikes strapped to its rear. She motioned to the start of the Moab Brand Trails, a series of mountain bike loops a few miles north of town. A man sat behind the steering wheel and a young girl slumped in the back seat.

“It looks kind of . . . ,” and then she whistled a cheery melody as if to say cycling here would be a walk in the park.

“Yep, it’s supposed to be pretty soft core,” I said reassuringly. “That’s why we’re doing it.”

“Oh, OK, I guess we’ll go elsewhere,” she said, rolling up her window.

Here in this internationally known road-bike region, it’s all relative. One person’s tame is my death defying.

The truth is, mountain biking scares the bejeebers out of me. I’m a pavement-preferring cyclist. I rode here before, in 1995, and even nervously pedaled a short slab of the expert roller-coaster Slickrock Bike Trail — 12 miles of two-wheeled torture that ignited the mountain-biking craze in Moab in the mid-’80s.

But if anything can coax a “roadie” back on fat tires, it’s the scenery in southeastern Utah, where reddish-hued rocks gleam against brilliant blue skies and fantastical palaces of sculpted sandstone appear to have been deposited by Martians. On a mountain bike, you can be a part of the landscape instead of an observer.

I was more interested in placating my fears than conquering them, so I studied up on the “easiest” trails by searching online and asking bike shops about “family friendly” rides, not mentioning that I, a fit and family-free 54-year-old, was the timid one.

The good news is that in the past four years, Grand County has more than doubled the number of its mapped and marked dedicated bike trails of all levels, from 43 miles in 2008 to 95 miles today, with 30 more on tap next year, said Marian DeLay, executive director of the Moab Area Travel Council.

Another big change, which I would have told the adventurous Coloradan had I known, has been the formation of multilevel trail systems, of which “the Brands” is a perfect example. There, hairier routes loop off a gentler main path, in this case Bar M.

“Look, we’re even on a plateau,” said my wife, Lina, a more-confident rider, as we headed out, the shocks of our Giant Trance X1 XC Full Suspension rentals absorbing every bump. “It’s as flat as a pancake,” she added in a tone hinting at disappointment.

“Excellent!” I shouted, relaxed until we rounded the first corner. The path narrowed, dropped, then rose quickly, with scattered rocks along the way. Already, the young girl in the family ahead of us had gotten off her bike to climb the hill. I made it up one crumbly incline, then lost my nerve on the next and dismounted. Lina, ahead of me, became smaller and smaller.

In the end, I rode about 80 percent of the trail. I grew especially fond of the pocked and crevassed “slickrock” sandstone, which when dry, as it was on this April day, provided a cement-like grip. Walking wasn’t so bad either, as it gave me a chance to admire the view — unending rock, scrubby evergreens, flaming red paintbrush blossoms, and even the jagged outline of Arches National Park in the distance.

“I’m just going to take the little Circle O loop and catch up with you where the trails intersect,” said Lina, eager for more action. After I waited 45 minutes for her at our appointed meeting spot, she arrived breathless.

“OK, now I feel like I’ve really been mountain biking,” she said. “It was all rock, with just a brown line that you follow. It took a lot longer than I thought.”

I had enjoyed the chance to rest and ponder how I would fare on our afternoon outing to the three-year-old Intrepid Trails at Dead Horse Point State Park, another family-friendly destination suggested by Chile Pepper Bike Shop, where we rented our rides.

At Dead Horse, 30 miles southwest of Moab, three connecting singletrack loops range from 1 to 9 miles. An online guide had said that “most of the trail can be ridden with a single-gear bike,” but when I asked the ranger, he said, “easy to moderate.” Uh-oh. Nonetheless, I let Lina talk me into the longest option, Big Chief. Thanks to steep pitches, tight turns, and sand, my walking-to-cycling ratio doubled from the morning, which also meant more time to appreciate the overlooks onto the Colorado River and Pyramid Canyon.

Walking on jelly legs after the ride, I chatted with fellow travelers in the parking lot. Sabrina Gosselin-Epp, 11, and her brother, Liam, 9, from Alberta, Canada, had just finished the 4-mile Great Pyramid loop with their parents and were ready for more.

“I had to walk some, because of the sand and where it was steep, but it was fun,” said Sabrina. “We might come back and do the longer one.”

Fred and Susie O’Connor, recently of Thayne, Wyo., and former longtime New Hampshire residents, had tackled the Pyramid trail on a whim on their suspension-less bikes and frequently needed to hoof it.

“Do you mountain bike often?” I said.

“We didn’t really know we were mountain biking,” laughed Susie, 65. “It’s like skiing. Don’t be afraid to take off your skis and walk.”

Ready for rest, Lina and I took in the famed sunset at Dead Horse Point Overlook, where we witnessed the walls of the east-facing canyon radiate orange and red.

After carbo-loading in town at Moab Brewery, which offers nine brews and a complete dining menu, we plotted our next rides. We would sample the 100-mile White Rim Trail, a technically fairly easy Jeep road, and attempt the 10-mile Klondike Bluffs trail, rated moderate but featuring irresistible dinosaur tracks.

Naturally, both options held surprises. We started at Canyonlands National Park, exploring on foot and by car. We cycled toward White Rim on the Shafer Trail, a passable twisting dirt road with harrowing vertical drops hundreds of feet. I gasped when we reached the Shafer Switchbacks, a series of steep, narrow hairpins leading down to White Rim. “No way,” I declared, and even Lina concurred.

We fared better at Klondike Bluffs, near Arches, though Lina had to urge me on after a series of dismount-worthy rocky and sandy climbs. My rewards here were a dozen Jurassic-period paw prints and a couple of rigorous but thrilling miles of undulating slickrock.

Klondike is one area receiving a wider variety of trails this year, said Sandy Freethey, chairwoman of the county’s Trail Mix committee, which has a small staff and a team of volunteers working to expand the mountain bike network from beginner to advanced.

“Our young hard-core riders from the ’80s now have children and even grandchildren, and we want to give them all some place to ride,” she said. “We have about 10 more new miles coming right now, most easy.”

Whatever “easy” means, I told her, I would be back to check them out.