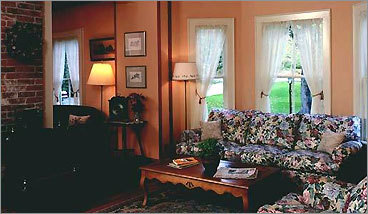 Though he has managed the Crocker House Country Inn for 28 years, owner Richard Malaby has never seen the ghost that is purported to pace the halls of his restored 1884 traditional country inn. However, this does not stop guests from believing a resident spirit thought to be Baroness Olga Lanoff, a former proprietor of the inn and a baroness by marriage.

As a beautiful young woman in Hungary, she turned heads as a dancer in a burlesque troupe. Her first husband, Baron Carl Lanoff, whisked her away to his native Argentina and a life as an importer of Bol Yerba tea, which the inn now makes available in every guest room.

When she became the Inn's owner, she would occasionally dance in the living room to entertain her guests. Though in life Olga only opened the inn for summers, she is said to walk its halls year-round.