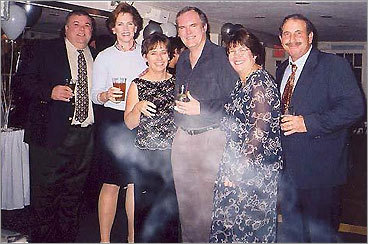 Ed Maas laughs when asked if his award-winning Cape Cod inn is haunted. The Orleans Inn reportedly experiences all the slamming doors, gusts of inexplicable cold air, and footsteps that other haunted inns boast, but Maas also has photographic evidence. At a Chatham High School 25th-reunion party several years ago, Maas snapped the photo at left. When he later received a copy of it along with a bewildered call from the party-goers, Maas explained that the presence gliding through the frame was just Hannah, one of the inn's three resident ghosts.

In the 1920s, the inn building housed a brothel. One of the women was murdered there, and Maas believes it is her ghost, which he named Hannah, that happily occupies the house. Maas' first acquaintance with Hannah was innocuous enough. He said he often sleeps on the couch in case a guest needs something at night. Once he awoke when a naked woman came down the stairs. He and the woman exchanged hellos, and Maas fell back asleep. He did not think of the encounter again until he received a phone call from a passing motorist, who warned Maas to put curtains into the fifth-floor belvedere window. When asked why, the man answered that he could see a naked woman dancing around in the room and she didn’t seem aware she was visible from the street.

There was no guest in the fifth floor room.