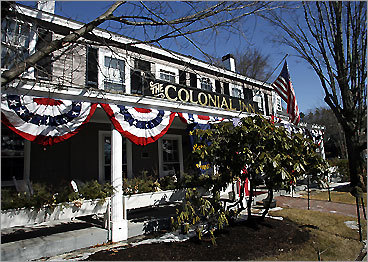 Concord’s Colonial Inn, which opened in 1716, is one of oldest inns in America. As a result, is has its share of resident spirits, including a celebrity — Ralph Waldo Emerson. Emerson's ghost is said to walk the upstairs hallways.

Furthermore, when a team of paranormal experts investigated the inn, they noted several phantom presences, especially around Room 424. The room was the operating room of Dr. James Minot, who had a medical practice in the inn. In the room, the presence of a Native American woman with braids was detected. It is believed she was employed by Dr. Minot to comfort and care for his surgical patients.

In addition to expert testimony, staff members have also reported paranormal experiences, including the feeling of being touched as though someone was trying to pass them. Also one of the Inn's restaurant servers told paranormal experts he was once trying to swipe a guest’s credit card when it flew out of his hand as though someone behind him had grabbed it. The card was then found in a closed cabinet.

Read more about the hauntings as well as reports from two paranormal organizations on the inn's website.