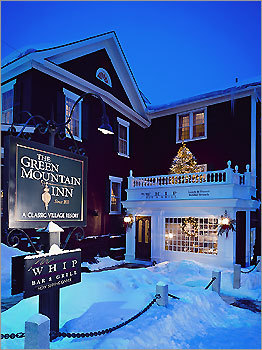 If you feel a peculiar chill near room 302 of the Green Mountain Inn, stop and listen closely. You may also hear the singing or staccato clicks of a tap dancer.

Boots Berry was born in room 302 in 1840, and many believe his spirit remains there. The son of one of the Inn's chambermaids, Boots grew up and took over his father's job caring for the horses that drew the Inn's stage coaches. One summer morning, Berry stopped a runaway coach, saving its passengers. He received a medal for his dramatic heroism, and a local legend grew around his act. But then Berry started to drink heavily. He lost his job at the Inn and eventually drifted to New Orleans. He landed in jail, where he learned to tap dance and earned the nickname "Boots."

After his release, he returned to Stowe, where he committed a second heroic act. A young girl became trapped on the roof of the Green Mountain Inn during a violent snow storm. Berry ran to the roof over Room 302 through a secret route he'd learned as a child, and saved the little girl. But Berry wasn't so lucky — he ended up falling from the roof over the room where he was born.

Berry's spirit remains at the inn he called home a century ago and he sometimes can be heard tap dancing on the roof or entering his former Room 302.

Find out more information about the legend of Boots Berry on the inn's website.