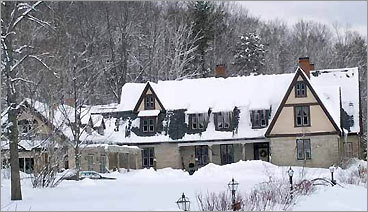 
A guest reportedly rose to find the name ''Abigail Jones" scribbled on the mirror. The innkeepers were puzzled until two years later when an old box was found in the attic. Among the papers was a faded letter that told the story. Written in the mid-1800s, and full of biblical quotes, the former guest, or perhaps a servant, signed herself ''Abigail Jones."

Until that discovery, the prime suspect had been Nancy Barton, whose gravestone decorates the inn's front parlor. She froze to death on the property a century ago while searching for her faithless lover.