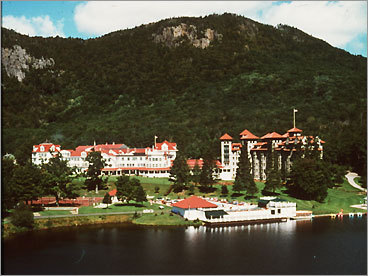 The Balsams — that castle-like complex in the forests of northern New Hampshire — reportedly has two resident spirits: the beautiful woman in 19th-century garb who vainly lingers before the hallway mirror, and a man in Room 120 with his own vain personality.

A woman woke up in the middle of the night and saw the man, stark naked and dripping wet, standing at the foot of the bed. Thinking it was her husband, she spoke to him. But her husband answered from the pillow beside her. Together they watched the phantom fade into nothingness. Later they learned it had been the room of a 1930s band leader who had drowned in nearby Lake Gloriette.