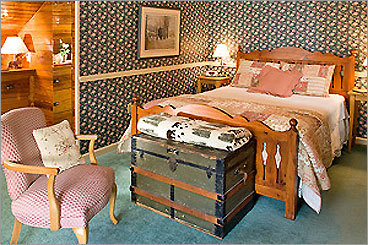 Test by Nicole Duarte/Boston.com Staff; Photo courtesy of The Inn at Jackson

In Room 14, in what used to be the Inn at Jackson's attic, lurks a ghost who likes things clean.

In the early 1990s, the Inn's then-owners hired a local teenager, Jason, for a few months to help clean out the unused attic so it could be renovated into guest quarters. After he left the inn, Jason fell in with a crowd of dangerous boys, an association that landed him in the Ossipee County Jail. Fearing retaliation from his unforgiving new friends, Jason hanged himself in his jail cell, said current inn owner Don Bilger.

Bilger bought the inn three years ago and has never heard or seen anything unusual. However, guests have reported experiencing lights and water turning on and off on their own and other strange occurrences. One guest even said a metal bucket had appeared next to the bed during the night, conjuring images of a boy who was once hired to help clean up.