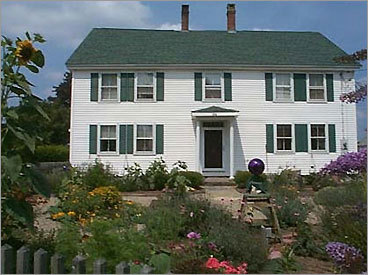 Kate Bauer and her husband purchased the Homespun Farm Bed and Breakfast from the Brewster family after the clan matriarch was too ill to remain there alone. Occupied by Brewster blood for more than 250 years, Kate Bauer soon discovered the family still had a strong hold on the farm. Both Bauer and her husband have felt the protective presence of a Brewster ancestor who wanders the orchard.

In addition, just after she first moved in, Kate Bauer would find old-fashioned bobby pins at the foot of the back staircase. Each time, she put the new pin into a secure cupboard where she kept the rest of her collection. A few years later, she went to get out the pins and discovered they had vanished.

Later on, Kate Bauer learned the house's last living Brewster mistress had passed away a month before Bauer went looking for the bobby pins that last time. In that same month, Bauer said she noticed she had stopped hearing her name called when no one was around, and her children had also stopped reporting hearing footfalls when they were alone.