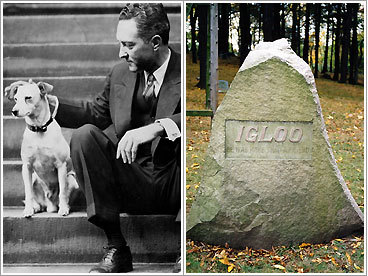 Traveling to the ends of the world with his polar explorer owner, Richard Byrd, Igloo — nicknamed Iggy — became a minor celebrity in the late 1920s. The wire fox terrier accompanied Byrd on the historic first flights over the North and South Poles, in 1926 and 1929 respectively, as well as a winter expedition to Antarctica in 1928. His journeys were documented in the 1931 children's book biography "Igloo," and his death in 1931 of food poisoning made national news. Buried in Pine Ridge Cemetery for Small Animals in Dedham, Igloo's gravestone, which is in the shape of an iceberg, reads "Igloo--He Was More Than A Friend."

Read the Globe story about Igloo and his owner’s Boston home.