Will a homespun tradition win over this big-city transplant? 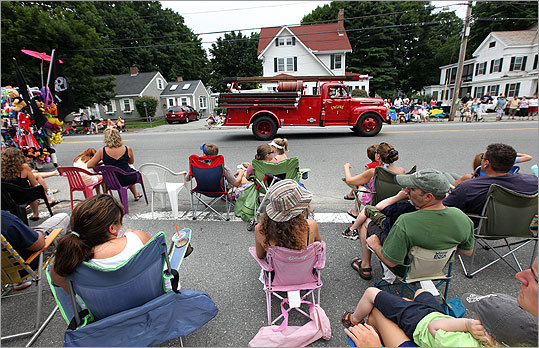 Though we’d spent many years complaining about scary neighbors, parking tickets, outsize rents, and other urban dramas, our migration from Cambridge to Newburyport last year was something of an impulse decision. I had been steadfastly opposed to moving to the suburbs. But Newburyport, I reasoned, was “the beach.” We bought the third house we saw.

Once my husband Bob and I unpacked and had some time to really consider the idea like responsible adults, we weren’t so sure anymore. That first stormy winter, our 150-year-old house lost half its roof. Sushi and yoga options were limited. We didn’t have many friends, though we did have mice. But life on the North Shore wasn’t all dire: We liked our local library, the marina-side coffee shop, and inevitably running into at least one of the five people we did know whenever we went for a walk. Even more, we liked the idea of living in a place so proudly self-celebratory that it hosts a much-hyped annual event called Yankee Homecoming.

Newburyport’s Yankee Homecoming began in 1958 along with events in 29 other East Coast towns and cities as a way to revitalize community pride and interest. Newburyport’s is the last one standing, a weeklong celebration that includes, depending on who you ask, spirited events like live music, striper fishing, golf tournaments, and a lengthy fireworks display . . . or thousands upon thousands of visitors, many of them drunk, clogging up Market Square and hogging street parking. “We don’t leave the house all week,” our neighbors told us.

We city slickers were used to crowds, and to drunk people. And we certainly weren’t about to miss our first, biggest party of the year. We were excited to eat cotton candy and Christina’s ice cream for dinner while being entertained/ harassed by puppets and mimes. We were eager for the week-ending fireworks, as well as the opening-day Olde Fashioned Sunday, which promised pancakes, boat rides, a pet show, and everyone’s favorite quaint summertime activity: canoe tilting.

OK, so we skipped the canoe tilting. But we did catch an aging and unapologetically wasted Evan Dando perform as part of a waterfront concert series. And we battled the crowds and the lines for the right to eat fried junk food. The place felt energized, almost metropolitan, but without the ubiquitous taxis or $18 glasses of wine. Then, one morning, I noticed my car, possibly mistaken for an interloper’s, had been keyed the entire length of the driver’s-side door.

On Homecoming’s final day, an hourlong parade along High Street included nearly five dozen interminably wailing firetrucks, floats featuring very local beauty queens and the neighborhood carpet guy, and every glad-handing politician around. We stood the entire time, thanks to the parade savvy who had known to reserve the public sidewalk with their chairs and pieces of rope, and I wondered what it meant for our geographic ambivalence if the best of the small town turned out to be the worst of the small town. At the same time, there was something nice about being there, cheering on this ridiculous parade, rubbing actual elbows and exchanging mostly pleasant chitchat with the people whose houses we drove by every day. So we couldn’t get an $18 glass of wine (and cheers to that). We had found something we hadn’t really ever experienced over years of living in Manhattan and Boston: neighbors.

Now which one of you keyed my car?

Alyssa Giacobbe is a freelance writer. Send comments to magazine@globe.com

Correction: Because of a reporting error, this story gave the wrong festival as the venue for a concert that took place last summer. The concert was part of Newburyport’s Riverfront Festival.