They itch to play

For these Grays and Cadets, re-creating a 19th-century version of their favorite pastime is seriously fun 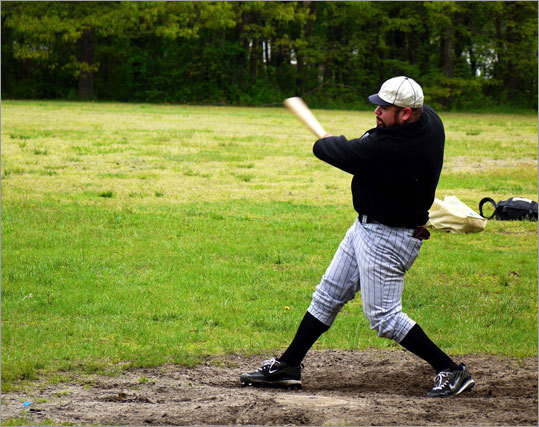 WARWICK, R.I. — It is the bottom of the fourth at the Hen House, and the Providence Grays are in trouble. An inning-ending pop-up strands a man on third and the Grays trail the Olneyville Cadets, 21-0.

And their woolen uniforms are getting itchy.

In fairness to the Grays, it is the most lopsided thumping this team of vintage baseball fanatics has absorbed since first taking the field in 1998, the start of the longest uninterrupted run of any vintage team in New England.

Club president Tim Norton and a few others founded the team as a tribute to the original Providence Grays, who played in the National League from 1878 to 1885 and won the first “baseball championship of America’’ in 1884, when they swept a three-game series from the New York Metropolitans, champions of the rival American Association. (The second-place team in the National League that year was the Boston Red Stockings.)

A lifelong fan whose love affair with Major League Baseball had soured during the 1994-95 strike, Norton was inspired by an article in the Globe about amateur baseball teams in New York. He has since become somewhat of an evangelist for vintage baseball as the legacy of a more innocent age. Although teams often play in obscure parks, spectators are more than welcome and most teams post schedules on their websites. “We’re living in a cynical age,’’ Norton says. “But when people see this throwback activity, they’re charmed.’’

And probably a little confused.

Vintage teams play by 19th-century rules as they evolved from the early 1860s (when a ball caught on one bounce was an out) to 1897, the dawn of “modern’’ baseball. Most teams are conversant with the various editions of the rules. The Grays generally play by 1884 rules; the Cadets by 1886 rules, which allow overhand pitching and require seven balls for a walk. Pitchers throw from a flat box only 50 feet from home plate. Teams agree on the year of the rules for their matches, and since most players are students of baseball arcana, they seek to exploit the rules. Arguments resemble closely fought court cases.

But whatever the year, vintage teams strive for authenticity. They use balls made to 19th-century specifications and swing hefty bats that weigh up to 40 ounces. The Grays wear coarse woolen uniforms that grow heavier as the game progresses, since they absorb perspiration rather than wicking it away. There are no batting gloves or helmets. Most players field with their bare hands, or use small, barely padded gloves. Players contend that their palms can absorb a lot of punishment, but broken fingers are commonplace. Hard-hit line drives are rarely infield outs.

“It’s hard to convince people to play baseball without a glove,’’ says Patrick Reilly, who started the Cadets with Vinnie Torrilli in 2004. “When you describe it, it sounds ridiculous, but everyone who comes to a practice stays.’’

Reilly put together his own team because there were no openings at the time on the Grays, an irony not lost on either team as the score mounts. The Cadets are a boisterous, rangy bunch who admit to weak fielding but compensate by slugging the ball to deep left field where the hapless Grays fielder has to dodge children’s swing sets and a jungle gym to retrieve it.

“We generally win more than we lose,’’ Reilly says. “We’re younger than most teams. In fact, only one of our players has kids.’’

On this particular day at the Hen House, a.k.a. Porter Field, the Grays are missing some of their best players for family obligations (a daughter’s dance recital, the birth of a baby) that probably would not have cut the mustard in 1884. Charlie Dryer, who is a dead ringer for Babe Ruth in his vintage uniform, is calling balls and strikes because a nagging injury has kept him from active play.

James Gunn is sidelined with a knee injury, but thinks he can play a few more years. “Just so you know,’’ he says as the Grays fall further behind, “these games are competitive. These guys are playing to win.’’ In fact, the Grays rally and put up four runs in the fifth and another two in the sixth. The hard-swinging Cadets answer with another 13.

Nineteenth-century rules — especially more balls for a walk and the fact that hitting the batter only counts as another ball — do not speed up the game, so vintage baseball tends to assume an epic time frame. The leisurely pace (be sure to bring a lunch) is not hastened by the limit of one baseball per game. A lost ball calls a halt to play until someone can ferret it out from the poison-ivy infested woods.

But vintage baseball is about the national pastime, with an emphasis on passing time. Players are delighted to chat and both teams are fonts of baseball history and statistics. Every member of the Grays can recite the tale of pitcher Charles “Old Hoss’’ Radbourn, who won a record 59 or 60 games (vintage record-keeping was somewhat less than precise) for the Grays in 1884. (The team’s other pitcher had defected to another league and Radbourn agreed to pitch both turns if he could draw both salaries.) New Grays player Drew Ewing says, “I’m a big baseball nut — the history of it especially.’’ When a spectator observes that vintage baseball lets players remain 13-year-old boys forever, he nods enthusiastically and grins.

The Grays manage to hold the Cadets to a mere four runs in the seventh inning, but fail to push any across themselves in the bottom half of the frame. They have been playing for 2 1/2 hours, so they agree to call it a game. “This isn’t uncommon when there’s a blowout,’’ says Grays captain Brian Travers. Besides, a playoff game has just started and there’s something unseemly about men in 19th-century baseball garb following hockey on their smartphones.

Players from both teams file across the infield shaking hands and planning where to watch the rest of the hockey game. Travers is chagrined. “I want you to know that the Grays have scored 39 runs in three different games,’’ he says. He is already looking forward to a Cadets rematch on Sept. 10.

Both the Providence Grays and the Olneyville Cadets play very fluid schedules, with some games announced only at the last minute.
The Grays usually play a one-hour demonstration game each season before a Pawsox game at McCoy Stadium in Pawtucket. This year’s game is yet to be announced.
For information on upcoming games, see the teams’ respective websites: www.providencegrays.org and www.olneyvillebaseball.com.
For information on other vintage teams around the country, including many in New England, see www.friendsofvintagebaseball.org.