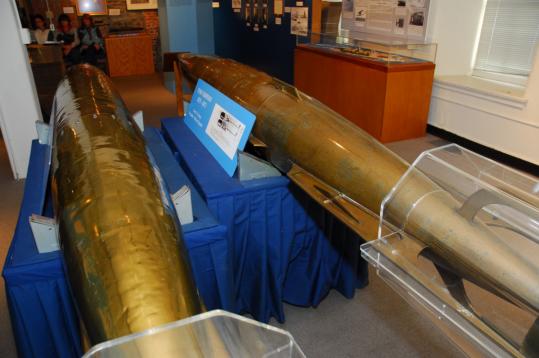 NEWPORT, R.I. - Its exhibits are decidedly low-tech and not interactive. The Naval War College Museum, however, claims one of the most impressive collections of photographs and war memorabilia you’ve probably never heard of.

Near museum director John B. Hattendorf’s office, for example, is a collection of Japanese samurai swords, some of them 600 years old. Hattendorf, a professor of maritime history at the college and author of more than 40 books on the subject, said he looked up one day and there was a four-star Japanese admiral in full regalia studying the display.

“He was impressed with the collection,’’ Hattendorf said.

The museum is free and open to the public, but since it’s on military property, visitors must give 24-hour advance notice.

The facility is housed in what began in 1819 as the Newport Asylum for the Poor. Legend has it that in 1884, Commodore Stephen B. Luce was rowed from the flagship of the North Atlantic Squadron anchored off Newport to Coasters Harbor Island, a site designated earlier by the Navy for a college. Luce went to the large stone building that had been the asylum, climbed its rickety stairs, opened the door and announced, “Poor little poorhouse, I christen thee United States War College.’’

The college outgrew the building, now a National Historic Landmark, and it was taken over for the museum, which focuses on naval history generally and the naval heritage of Narragansett Bay and the war college in particular.

The layout of exhibits hasn’t always been ideal for the collection, which now includes more than 3,000 items. Hattendorf said the exhibits have been largely unchanged in 25 years.

“Now we’re undergoing a modernization and renovation, and the first step is to create a visitors’ route,’’ he said, which will move the gift shop from the entry to the exit of the building and create a flow to take visitors on a chronological journey through the museum, starting with a gallery on Colonial history.

But it will remain a no-frills look at the naval war machine. Many displays, in fact, are on poster board with pasted-on label descriptions.

Indeed they do. There are big, sleek torpedoes (disarmed, of course) such as the 1873 Fish, the first air-driven torpedo. The Mark 14 torpedo was developed at the nearby former US Naval Torpedo Station on Goat Island, which in World War II employed 13,000 civilians, 1,100 military personnel, all churning out a torpedo credited with sinking 4 million tons of enemy ships.

Visitors can marvel at a model of the first submarine, the Holland, which was tested in Navy trials in Newport. A signal lantern used in the Spanish-American War is on display, as is a massive model of a ship at the Battle of Trafalgar in the Napoleonic Wars of 1805.

The history is uniquely regional. There is a display on PT boat history as all PT boat commanders were trained at the war college, including John F. Kennedy.

Photos abound of those who have taught or attended the war college, and the list of grads reads like a who’s who in US military history, including Rear Admiral Alan Shepard, the first American in space, and Fleet Admirals Chester W. Nimitz and William F. “Bull’’ Halsey, naval legends in World War II. In the basement of the ancient building is a blown-up photo of Admirals Ernest J. King, Raymond A. Spruance, and Nimitz on the USS Indianapolis, all wartime leaders and all war college grads.