THIS STORY HAS BEEN FORMATTED FOR EASY PRINTING
A TANK AWAY | WOONSOCKET, R.I. 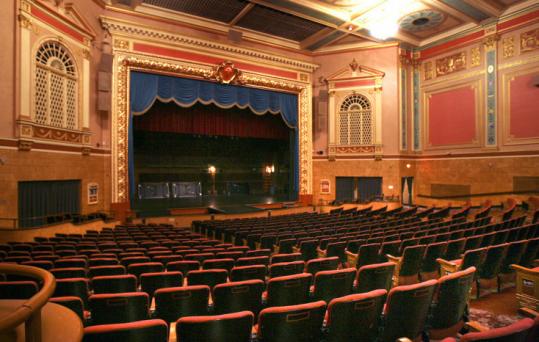 Often surprising are the ways in which this city’s French-Canadian heritage shows its lasting influence. At New York Lunch, a modest hot dog joint, for example, natives order the “tree’’ frankfurter special - three pronounced with an accent. This great old mill community isn’t known as “The Most French City in America’’ for nothing. In the 2000 federal census, nearly 50 percent of residents identified themselves as French or French-Canadian, owing to the massive influx of Canadian mill workers in the early 20th century that helped make Woonsocket a leading textile player. The city has retooled itself since, with many of those old buildings enjoying new glory as commercial structures. Woonsocket offers some of Rhode Island’s best food and arts, making it an ideal destination for a couples retreat.

Stay
There aren’t a lot of lodging options in Woonsocket, but one best bet is the romantic Pillsbury House (341 Prospect St., 800-205-4112, www.pillsburyhouse .com, rooms $88 through June), located on historic Prospect Street in the city’s north end. This home, built in 1875, offers four rooms, two with original chandeliers and all appointed with fine furniture. Those looking for more conventional lodging should try the Holiday Inn Express (194 Fortin Drive, 401-769-5000, www.holidayinnexpresswoonsocket.com, doubles weekdays $129, Friday-Sunday $109), with 88 rooms and an indoor pool and fitness center.
Dine
Woonsocket shines in the food department with longtime culinary destinations like Ye Olde English Fish and Chips (25 South Main St., 401-762-3637, entrees $3.45-$14.10), an old-school eatery and city mainstay since 1922. Across Market Square is Vintage (2 South Main St., 401-765-1234, www.vintageri.com, entrees $16-$20), a charming, Euro-bistro-looking place, long and sleek with black-backed bar. The best dining view in the city can be had at River Falls (74 South Main St., 401-235-9026, www.riverfallscomplex.com, entrees $7.99-$27.99), in a restored mill building with its original jagged stone walls overlooking the raging Blackstone River. Best deal: The Wednesday night special of $30 per couple for two entrees, a bottle of house wine or pitcher of beer, soup or salad, and dessert.
During the day
Couples skate hand in hand around the city-run River Island Park Skating Rink (Island Place, 401-762-6400, www.woon socket.org/skating.html, free admission), an open-air affair between the park’s bandstand and the river where a crackling wood-burning stove warms skaters resting on benches and music to skate by is piped in. St. Ann’s Arts and Cultural Center (84 Cumberland St., 401-356-0713, www.stannartsctr.org) is housed in the architectural masterpiece that is St. Ann’s Roman Catholic Church, which became a nonprofit cultural center in 2007 after the diocese shut it down owing to dwindling church membership and maintenance costs. The structure built by French-Canadian immigrants from 1913 to 17 has been referred to as the Sistine Chapel of America, because all its interior walls, vaults, and ceilings are covered in fresco paintings by Florence artist Guido Nin-cheri in the Michelangelo style. A fascinating journey into the area’s working past is at the interactive Museum of Work and Culture (42 South Main St., 401-769-9675, www.woonsocket.org/workandculture.htm, $7 adults, $5 seniors, students, kids age 10 and under free) with exhibits such as a 19th-century Quebec farmhouse, a 1920s Catholic school classroom, and an old parlor so realistic you feel like you’re back in Grandma’s house.
After dark
At the core of the city’s cultural revitalization is the nonprofit Stadium Theatre Performing Arts Centre (28 Monument Square 401-762-4545, www.stadium theatre.com), a restored 1926, 1,110-seat venue hosting films and live productions. This year’s lineup so far includes Cirque Le Masque, “Julius Caesar,’’ and comedian Pat Cooper. Cityside at River Falls (74 South Main St., 401-235-9026, www.riverfallscomplex.com), in the same building as River Falls restaurant, is a 5,000-square-foot music-and-dance venue with two levels, billiard tables, two bars, 16 high-definition TVs, and live entertainment on weekends. Jazz and blues fans flock to Chan’s (267 Main St., 401-765-1900, www.chanseggrollsandjazz.com), which is known in equal parts for its incredible Cantonese, Szechwan, Hunan, Mandarin, and Shanghai cuisine and its 150-seat Four Seasons Jazz and Blues Club. Over the years, legends such as Duke Robillard, James Montgomery, Dizzy Gillespie, and Roomful of Blues have graced the stage.