A new menu on Federal Hill

What was long seen as an Italian enclave is now a diverse neighborhood of galleries, shops, and restaurants 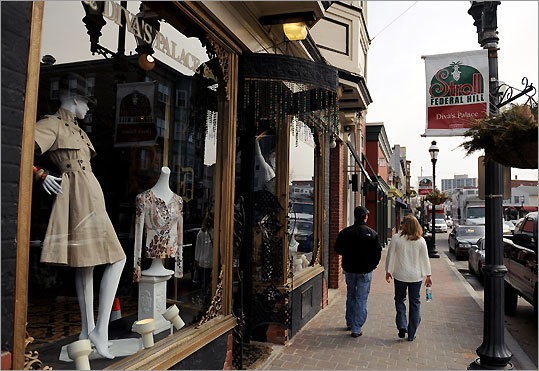 PROVIDENCE -- Georges Makhlouf is part of the changing face of Federal Hill.

Long a predominantly Italian stronghold in Rhode Island's capital city, Federal Hill has undergone significant changes over the past 20 or so years. It has become home to such businesses as non-Italian ethnic restaurants, a handful of art galleries where customers pay no sales tax, high-end clothing boutiques, and Makhlouf's Nara Hookah Lounge on Atwells Avenue, the main drag through the heart of the hill.

"This seemed like a good place to open a second business," said Makhlouf, who with his wife, Iryna, runs another hookah lounge, Byblos, on Thayer Street near Brown University. "They say I am the godfather of hookah in Rhode Island; I had the first lounge in the state."

In an area of Providence where, in summer, WaterFire draws tens of thousands of visitors downtown to see braziers of scented wood ablaze on the rivers, Federal Hill has reinvented itself to stay relevant and, more importantly, remain a huge tourist draw.

"Without question, Federal Hill is in the top five destinations in the state," said Mark Brodeur, tourism director for Rhode Island.

Makhlouf opened his new place last April. The back wall of the main lounge is an architectural relief of squares and rectangles that mimics the skyline of Beirut, and the bar is lined with twisted cherry-wood stools from his native Lebanon. It is a warm, comfortable setting where you can fire up a hookah full of mango, lemon, or pumpkin spice tobacco with friends, have cocktails, and nibble Middle Eastern food such as stuffed grape leaves, baba ghanouj, or labneh btoom, a yogurt cheese whipped with garlic and finished with olive oil and mint.

"It's a very social thing," Makhlouf said of smoking a hookah with friends.

Food has long been the main draw on the hill in a state where 41 percent of all tourist dining happens in Providence and roughly half of that on Federal Hill, Brodeur said. Kristen Adamo, vice president of marketing for the Providence Warwick Convention & Visitors Bureau, said that in the past few years, Federal Hill has been second, right behind WaterFire, in tourist-related inquiries.

"There's definitely a buzz out there, particularly in summer," Adamo said. "It's more of a scene there. It's not just having dinner there and going downtown; it's staying there and doing more things."

Those things include night life that burns late into the evening at places like Artini's martini bar, Two 9 Five, Sona Lounge, and Tammany Hall Pub and Parlor, places that pack patrons in until the 2 a.m. closing on weekends.

A big draw as summer approaches is the 10th annual Federal Hill Stroll, scheduled for June 9, whose participants meander the hill and sample food at participating restaurants for a $30 admission.

Another newer aspect of the hill is the proliferation of galleries, helped by the state declaring the area a tax-free art zone. You can buy a $5 or $5,000 work of art and pay zero tax, which has done wonders for the culture-seeking tourist, said Berge Zobian of Gallery Z, the first of five galleries to locate on the hill. He welcomes the cultural company.

"My concept is if you have a gallery and another opens next to you or across the street, it's all good for business," said Zobian, who hosts exhibits ranging from profound to funky, from highlighting the moody work of fellow Armenians to a recent installation of musical instruments that featured an organic guitar. "It makes the area a destination, not a competition," he said.

Christopher Belleau, a glass artist, opened Gallery Belleau II on the hill in October, "possibly the worst time economically to open a new business," he said, but in an area he thinks holds promise. He has another studio on Wickenden Street, a more traditional cultural enclave near Brown University.

"I'm hoping this will become more of a destination," he said of his gallery and the four others on the hill in the tax-free zone. "We feature the work of 20 or so artists here, and are looking for more local talent to give it more energy."

For women's clothing lovers, two of the hottest hill spots are Diva's Palace and Garbolino. Diva's Palace is run by designer-owner Michael Turner, who creates some of his own fashions. Monique Orcutt's Garbolino boasts Los Angeles-designer fashion, Orcutt said, high-end items "like you see in LA or New York City."

Garbolino came to the hill 14 years ago when it was, Orcutt said, "run down, a lot of low-income tenements, mom-and-pop business. Now it's more upscale, more like Soho" in New York.

Orcutt is from Los Angeles, has lived in New York, and finds Federal Hill "extremely accessible, very doable. We have a store in LA, and I have to say shoppers here are very, very discriminating. People purposely come down from Boston to shop here."

While Italian food still rules the hill, other ethnicities pepper a street less than one mile long but teeming with more than three dozen restaurants, including Jamaican, Mexican, and Asian.

"It's still referred to as Little Italy, but now any taste bud you can kick up, you can fulfill on Federal Hill," said Michelle S. Ahlborg, president of the Federal Hill Commerce Association. "And with the art galleries and all the other things we have going on here, it's a whole new world."

Chef Walter Potenza is more a face of the hill's old world. He came to Rhode Island from Italy in 1972 and has been a fixture for decades, working for various restaurants and opening his own, including his current one, Walter's. Potenza is something of a Little Rhody celebrity; his face adorns his own bottles of tomato sauce sold in area stores, and he has hosted cooking shows on local cable television. He also hopes to create the state's first Italian culinary center soon on the hill.

Though Federal Hill could do more to promote itself, Potenza said, "it works because of its diversity. This place has no rivalry when it comes to cities like Hartford and New Haven."

He said there is less of an Italian presence on the hill than people may realize.

"There aren't a lot of Italians opening businesses now here, but they use the Italian idea" and image, Potenza said. "If you come in summer and hear a few of us speaking Italian, you think the whole street is Italian, but it's not."

The hill is a work of continual progress, Ahlborg said, a place of some 150 businesses trying to make it in one of Rhode Island's most popular tourist areas.

"On a walk my first year here, I found a guy who makes his own jewelry, Roberto's, and Nancy's Fancies, which makes specialty cupcakes that are all the rage in New York and LA," she said. "Those are the kinds of things that really make the hill stand out."

Paul E. Kandarian can be reached at PKandarian@aol.com.