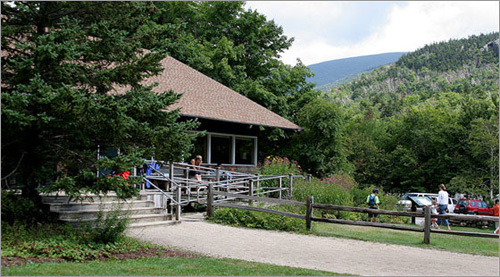 My hike started when I pulled into the Pinkham Notch visitor’s center, a couple miles up Route 16 from Jackson, New Hampshire, at shortly after noon. I scanned the sky, looking for the summit, but was disappointed to see that it was shrouded in clouds – as it often is

Mt. Washington sits at the confluence of three major storm paths, and the summit regularly records some of the harshest weather in the world. Recorded wind speeds peak as high 230 mph, summer snowfalls are not uncommon, the weather changes in an instant and strong winds are par for the course. All that, and it's still one of New England’s most popular mountains to climb.
(Photos and story by T.S. Amarasiriwardena/Boston.com Staff)