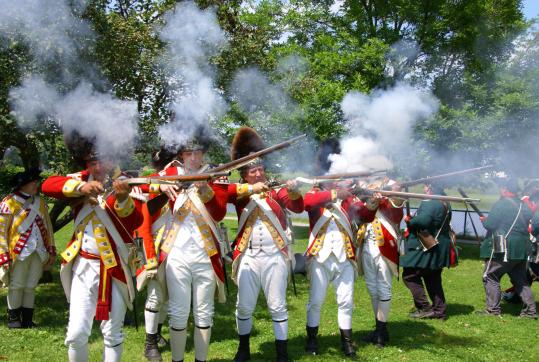 The state’s simple motto encapsulates its legendary independent streak. Freedom is so deeply venerated in the Granite State that, even though no big Revolutionary War battles were fought on its soil, it’s a natural location for a museum dedicated to the American ideals we celebrate this weekend.

The story of how this hamlet became home to the Museum could have been lifted from the screenplay of the movie “National Treasure.’’ It wasn’t Nicolas Cage, however, but electrician Dick Brewster and his assistant who made a startling discovery while installing a fire alarm system in Exeter’s venerable Ladd-Gilman House in 1985. Buried under the attic floorboards, amid newspapers and clothes used as Colonial insulation, was a treasured piece of Americana — a rare original Dunlap Broadside of the Declaration of Independence.

On the night of July 4, 1776, the broadsides were furiously printed in Philadelphia and dispatched throughout the Colonies — and to King George III in England — to spread the news of America’s separation from the motherland. One of the broadsides arrived in Exeter, which served as New Hampshire’s wartime capital, 12 days later.

Of the estimated 200 original Dunlap Broadsides, fewer than 30 have been found, which made the copy discovered in the attic worth millions. The Society of the Cincinnati in the State of New Hampshire, a patriotic organization founded in 1783 and owner of the Ladd-Gilman House, sought to auction off the rare document, but the state objected, claiming the broadside was its property. The skirmish was settled by a 1991 agreement to create the American Independence Museum as a repository of the broadside and a center of learning about the principles espoused in the document.

The Ladd-Gilman House, which sits in the shadow of Phillips Exeter Academy, is the centerpiece of the museum. Built in 1721, the brick house covered with yellow clapboard was the domain of the Gilman family, prosperous merchants and one of New Hampshire’s earliest political dynasties.

“The family was very active in wanting to break from England,’’ says Julie Tiebout, the museum’s marketing and development director. Nicholas Gilman Sr. was state treasurer during the Revolution. Nicholas Gilman Jr. was part of George Washington’s Continental Army staff, a congressman, and a signer of the US Constitution, and another son John Taylor Gilman served as New Hampshire governor for 14 years. “They certainly weren’t slackers,’’ Tiebout says.

Exhibits in the Ladd-Gilman House’s period rooms chronicle the roles that the Gilmans and Exeter played in the formation of the republic and highlight the chapters in the American colonies’ march to independence. Visitors who step inside the room used as the state treasury during the Revolution learn about the fight over taxation that led to war. The parlor, which features a high-quality reproduction of the museum’s Dunlap Broadside, is used to tell the story of the Declaration of Independence.

The creation of the Constitution is the focus of another room that showcases copies of two rare drafts that belong to the museum. One of the drafts, which belonged to Constitutional Convention delegate Rufus King, is marked up with cross-outs and suggested edits scratched in the columns. What’s striking about the draft is that the preamble starts with listing of the individual states rather than the familiar collective “We the people.’’

“It gives me chills that they changed it,’’ Tiebout says. “It said that we shouldn’t be individuals; we’re all in this together. I think that’s extremely dramatic.’’

Museum exhibits also focus on the Society of the Cincinnati, whose members are the eldest sons of direct descendants of commissioned Revolutionary officers. Throughout the house are artifacts collected by society members, such as a vial of tea supposedly from the Boston Tea Party, Revolutionary-era weaponry, and possibly an original Purple Heart.

Revolutionary officers meeting in Exeter’s Folsom Tavern formed the New Hampshire chapter of the Society of the Cincinnati in 1783. The building, which is now part of the museum, moved to several locations around town before being placed down the hill from the Ladd-Gilman House in 2004.

The Folsom Tavern — which has over the years housed a greasy spoon, a train station waiting room, and even a palm reader — has been restored to its Colonial glory. With its sunlit rooms, high ceilings, and grand staircase, it more closely resembles a mansion than a wayside inn.

The tavern was a five-star accommodation in Colonial days, so it’s little wonder that George Washington paid it a visit in 1789 during a presidential tour of New England. Unfortunately for the citizens of Exeter, who had planned a festive welcoming parade and an evening ball, the president arrived hours earlier than expected and stayed just long enough for breakfast. Visitors to the Folsom Tavern can step inside the parlor where Washington dined and the large assembly room where that presidential ball was still held, even without the guest of honor.

Behind the tavern, the museum plans to construct a building to permanently showcase its prized possessions: the Dunlap Broadside and drafts of the Constitution. The present storage location of the documents is a secret, but every year the museum throws a party for its treasures with the American Independence Festival, which will be held this year on July 17.

The festival, now in its 20th year, will kick off as a reenactor portraying Washington in full military uniform parades into town with his entourage, finally giving Exeter a chance to welcome him as they intended. As it did 234 years ago, the Declaration of Independence will arrive with a rider on horseback charging through the streets, and a reenactor portraying John Taylor Gilman will read it to the crowd.

The festival will include demonstrations by Colonial artisans, such as blacksmiths and coopers, and there will be an encampment along the Squamscott River. There will be a battle portrayal between the patriots and the Redcoats, plenty of fifes and drums, and numerous activities for children.

Festivalgoers will get their one chance this year to see the original Dunlap Broadside and drafts of the Constitution, which are kept under armed guard. You won’t see the declaration’s familiar finely crafted penmanship or John Hancock’s oversized signature on the printed broadside, but the document is in good condition and perfectly legible.

When you take the time to read the Declaration of Independence, you realize what a radical document it was. And it was not just the Founding Fathers, but ordinary men and women, who had to make truly brave decisions about whether to support the cause for independence.

“It was a terrifying decision,’’ Tiebout says. “You put your livelihood and lives of your children on the line.’’

A visit to the museum offers a necessary reminder that “live free or die’’ was once more than just a license plate slogan. It was a risky, real-life decision fraught with dire consequences for a liberty-loving people.