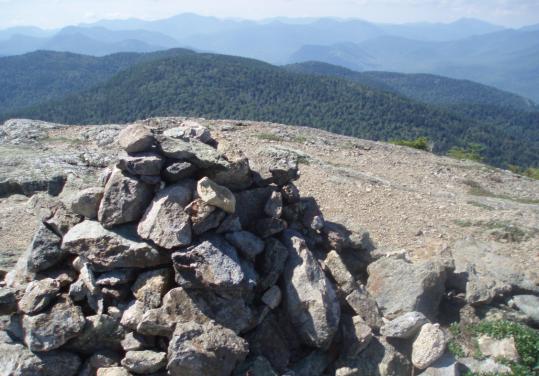 A cairn on the North Moat summit against a panorama of New Hampshire’s White Mountains. (Marty Basch for The Boston Globe)
By Marty Basch Globe Correspondent / December 6, 2009

NORTH CONWAY, N.H. - The reward for attempting the arduous skyline hike along the Moat Mountains comes in the striking vistas along the way, featuring the Mount Washington Valley’s varied landscape in whatever its seasonal attire.

Mighty Mount Washington is the familiar jewel to the north while Conway Lake shimmers in the south. The snaking and scenic Kancamagus Highway holds a small corner of the panorama. Even North Conway’s Route 16 “strip’’ takes on an exceptional quality, looking more like a miniature golf course than one outlet store after another.

A daylong traverse of the Moat range constitutes a tough ridgeline stroll of nearly 10 miles. The Moat Mountain Trail is for trekkers looking to climb multiple peaks in one outing. The Moats - South, Middle, and North - offer such highlights as blueberries in August, a kaleidoscope of colors in fall, and snow and ice challenges in winter.

Each peak has distinct characteristics. South Moat is the smallest at 2,770 feet and offers views of Mount Chocorua’s rocky summit cone. Middle Moat stands 2,805 feet high and features spine-like sections where the mountain appears to drop off to nothing on either side. North Moat is the tallest, at 3,196 feet, and is the most deceptive with steep scrambles that turn hikers into fleeting rock climbers.

The traverse is a two-vehicle affair. Hikers tramp between a trailhead located on Passaconaway Road in Albany and the popular Diana’s Baths parking area near North Conway village.

The well-marked trail in the White Mountain National Forest can easily take more than six hours to complete. It begins easily over a wooden bridge and follows a logging road with good footing through the woods. That is short-lived, however, as the path quickly increases in difficulty. But hikers, trekking up to steep ledges along the way earn treats in the form of grand outlooks to Chocorua and other peaks. The stone-filled summit is a fine spot to eat lunch, rest, and take in the views, including the backside of North Conway’s favored rock climbing ledges, White Horse and Cathedral. From South Moat, the trail rises and falls, and Middle Moat is reached in less than half an hour.

The trail is not without pitfalls. Strong winds can blow, and the ledges are exposed to fast-moving weather. Though rock piles called cairns mark the way on the ledges, at times they are difficult to spot as you move into wooded areas. “First think, then do’’ becomes an excellent motto for the hike, especially when leaving Middle Moat for North Moat.

North Moat is the pinnacle of the ascending giant staircase. From its bare crest, the dazzling 360-degree scene is a bird’s-eye view of the White Mountains with its forested countryside, ski areas, hidden alpine ponds, and miles of hiking paths.

On the descent are bonus vistas before hikers return under the forest canopy. The pathway has some sharp pitches but eventually eases by the flat banks of Lucy Brook and Diana’s Baths. That series of waterfalls signals that the final mile is at hand.

Marty Basch can be reached at marty@martybasch.com.

How to get there
The South Moat trailhead on Passaconaway Road is reached by leaving Route 16 in Conway Village and turning left at the traffic light across Route 153 onto Washington Street. Washington Street becomes West Side Road and at .9 mile from light, turn left on Passaconaway Road and travel about 2.5 miles to trailhead parking on right.
The trailhead for North Moat (Diana’s Baths) is on West Side Road. From North Conway Village turn left at light by Eastern Slope Inn and travel 2.4 miles to trailhead on left. To park at either trailhead, a White Mountain National Forest pass is required. A day pass, available at the site, is $3 per day. Other passes are available at various outdoor stores and ranger stations.