The wild right angle on trout 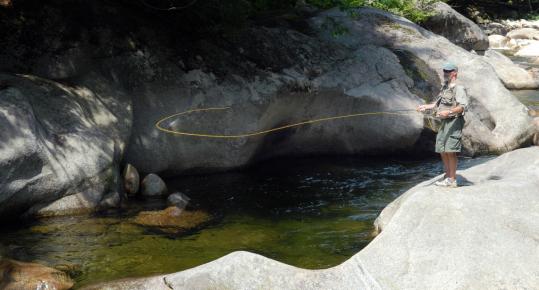 WARREN, N.H. -- Fishing the small streams of New Hampshire is a pastime that combines hiking, map reading, and bushwhacking, plenty of it. While anglers congregate on the blue ribbon rivers, such as the Connecticut and the Androscoggin, most of them overlook the small streams and wilderness freshets that feed the big waterways.

That's too bad, because New Hampshire has more than 20,000 miles of streams and rivers and the Fish and Game Department stocks nearly 1,500 miles of water with approximately a million trout.

"On a contour map, look for the headwater area of streams," John A. Viar, fisheries biologist at the department, recommended. "Some may be found near roads, others require a walk or a wade in. The better streams tend to be the ones you reach by walking away from roads."

"I've fished streams where I could jump from one side to the other without difficulty," Viar said, "but nearly all streams in New Hampshire hold fish. Small streams are an underused resource in most of New England."

I have been fishing the small streams of the White Mountain National Forest for a decade. The other day I got out my gear and headed for the Baker River. Go to any fly-fishing website and you won't find the Baker mentioned except in passing. Yet it, like many small rivers and streams in New Hampshire, is a delightful, stony brook in its mountain stretches, a bright, shimmering band through fragrant pine forests. It is a classic trout stream, complete with overhanging cover, pale white rocks, and sufficient deep pools and cut banks to make most casts pleasantly hopeful. Eventually it broadens and joins with the Pemigewasset River in Plymouth, emptying finally into the Merrimack River watershed. But in its headwaters, not far from Dartmouth's Mount Moosilauke Ravine Lodge on Route 118, it is a tumbling stream that carries snowmelt out of the mountains.

To fish the state's streams is to angle, primarily for brookies. Brook trout (Salvelinus fontinalis) are also known as square-tails by locals, a name derived from their nearly right-angled tail fins. Biologists have determined brookies to be indicators of ecosystem health and have been recently campaigning to get the word out. If brookies inhabit a stream, the odds are good that the waterway is in excellent condition.

"You can find fish from 4 to 8 inches in most of our streams," Viar said. "But you won't find a brookie with a more striking appearance anywhere than our native wild fish. They are gems. And cooked up on a campfire, they're hard to beat."

On the Baker, at a section I have fished many times, I strung up a 5-weight fly rod and tied on a Hornberg. A Hornberg is a useful fly that can mimic a dace or a grasshopper. It is fairly large, especially in relation to the trout, but I have found over the years that small fish go for big flies. I usually fish a Hornberg or a Muddler Minnow, a deer-haired streamer that comes in a variety of sizes and colors, but replicates a sculpin minnow or a grasshopper. Even if a trout doesn't take the larger streamers, it can usually be counted on to come up and give a look, revealing its location.

For all the inherent unpredictability of small stream fishing, it is satisfying to remember that brook trout -- like all trout -- require certain elements in a habitat. They like cover from above, so they favor fallen tree trunks that extend across the water, or cut banks where the stream has excavated a hollow in the soft mud. They particularly like the tiny pools that exist behind sizable rocks. Lingering behind rocks, they conserve energy by not fighting the current, and they are in a prime ambush position for anything flowing past. When a trout rises to a fly, it does not swim as much as tilt its fins and jet skyward.

I fished for a half hour without much luck. It was late in the season and the water remained fairly low and cold. I plunked my Hornberg in all the old haunts, drifting it past rocks that had proved productive in past years. Nothing. But after another half hour I slid it beneath the edge of a large boulder and saw the satisfying glint of a brookie rise to inspect my offering. On the second cast it hit with the remarkable hunger of small fish in a small stream, the head slashing and the tail bringing it up and out of the water. For a moment we stayed linked, the fish moving back and forth in its small pool, my fly rod bent as if to point at the trout's progress. Then the trout threw the hook and disappeared under the boulder again. I judged it to be a 7-inch fish.

Near sunset, at a second location, I scouted a beaver pond that had emerged from a swampy bog over the winter. The basket-weave dam allowed the spring run off to spill over, while preserving a half acre of slack pond water behind.

I watched for a while, hoping to see a trout rise. But then something just as promising occurred: A blue heron landed on the western shore and began patrolling the shoreline for frogs or trout or both. It was too late to start fishing -- I didn't relish the notion of climbing over swampy blow-downs in darkness -- so I decided to return another evening with more time. I watched until the heron became the color of the dying light and disappeared against the dry grasses.

Joseph Monninger, a New Hampshire fishing guide and author of "Two Ton, One Fight, One Night" (Steerforth, 2006), can be reached at joem@plymouth.edu.

How to get there
Warren, N.H., is about 125 miles or about two hours from Boston. Take Interstate 93 to exit 26 (Plymouth/Baker River Valley). Follow Route 3A/25 west to Rumney traffic circle and follow signs for Route 25 west, Mount Moosilauke Highway toward Rumney. Follow 16 miles to Warren.

Where to stay
Moosilauke Ravine Lodge
Route 118
603-764-5858
dartmouth.edu/~doc/moosilauke/ravinelodge
The lodge is affiliated with Dartmouth College and students work as food servers, cooks, and trail hands.
Meals served family style. Reservations open April 1 for the public.
Bunkhouse-style lodge $15 for students, $24 for adults. Bunks have mattresses, pillows and pillowcases, and wool blankets. Sheets and towels available for $8.

Nettie Brown House
294 Mount Moosilaukee Highway
603-859-1814
nettiebrownhouse.com
A whole-house vacation rental that sleeps up to 14 guests and is dog friendly. The house is situated in a perfect location for outdoor enthusiasts to explore the White Mountain National Forest and the nearby Connecticut River Valley.
Weekend rental $500, weekly $1,000, weekday $175.