Capturing the Cape’s topography and testing the players’ psychology 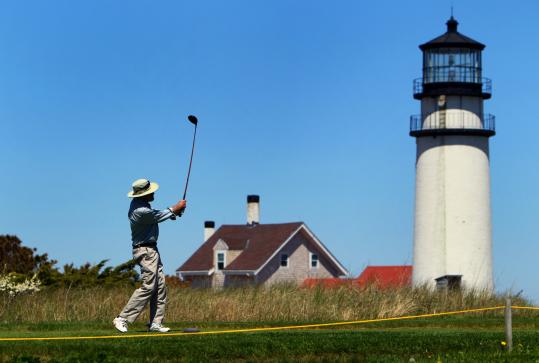 NORTH TRURO — I am standing in the tee box at the sixth hole at Highland Links. At the bottom of the cliff to my right I can see the surf crashing on the beach. To my left, I can see the lighthouse erected ages ago to keep clueless visitors from making a costly mistake. The green is out of sight, the wind is in my face.

Highland Links, the oldest golf course on Cape Cod, was laid out in 1892, just 37 years after Henry David Thoreau walked through on his way to Provincetown. “I saw that this was a place of wonders,’’ he later wrote about the premises. Bobby Jones and Francis Ouimet, two of the game’s immortals, knocked the ball above and beyond the Scotch broom and the heath. “Remember where you are and the ground you are walking upon,’’ reminds the sign hanging next to the pro shop door.

The ground hasn’t changed much in 118 years, which is the way the Scots meant golf to be played. If a hurricane or two chews away the tee box at the cliff’s edge, Highland’s caretakers will simply move the tees or do without the sixth hole. Nature, which designed the course, is the ultimate greenskeeper.

There are three public courses on the Outer Cape — Highland Links, Chequessett in Wellfleet, and Chatham Seaside — and all of them have a touch of the moor and the maritime. Since they’re nine-holers, all three can be played in a day easily with crustacean breaks in between. Even with the higher summer rates, the combined greens fees ($87) are a pittance compared with the $495 ticket at Pebble Beach, the famed California oceanside course where the US Open will be held next month, and they come with both bay and ocean views.

If golf is a good walk spoiled, as Mark Twain observed, links golf on the Cape is a nature walk enhanced by water, marsh, dunes, scrub pines, wildflowers, birds, and beasts. The challenge is that most of the scenery is in play and most of it is something other than fairway. If you get into trouble, it tends to be a lot of trouble. Besides an umbrella and sunscreen, the prudent golfer brings an extra sleeve or two of balls and a masochistic mood.

My wife and I turn up at Chequessett on a Saturday morning in late April when we still can cruise along Route 6 and through Wellfleet Center without excessive company. The Chequessett Yacht & Country Club, as it is formally called, was established in 1929 and the 106-acre course backs up to the harbor, which is pitching-wedge distance from the putting green.

Walking up the sandy path to the first tee we are unsure whether we should be wearing spikes or flip-flops. One hole later, we’re in a forest clearing with towering pines at the back and sides. Then it’s an uphill stroll from a sprawling meadow with a view to the bay from the top. Each hole presents a different vista, a different terrain (with water involved on five of them). Chickadees flit around the birdhouses, which serve as yardage markers. Deer scamper out of the brush.

Elevated tees play optical tricks. The sixth hole, bisected by a two-foot brook, looks decidedly longer than 241 yards from the red and white tees. The fifth hole is the devil’s sandbox — 101 yards into the wind with open-mouthed bunkers guarding an elevated green. Which club to use? The 8? 9? Wedge? Thus can a par 3 become a 6 and a nine-hole outing feel like an Outward Bound experience.

A long deck overlooking the finish hole allows survivors to sip a drink while deriving savage amusement from watching subsequent victims negotiate a cart path running crossways, a spewing fountain in the middle, and a couple of greenside bunkers. By the end of the round, our scorecards looked as if the numbers were scribbled at random — 5, 10, 4, 8, 6. Yet Chequessett merely softened us up for our cliffside adventure 10 miles up the road.

Highland Links, with its distinct Outer Hebrides flavor, calls for hiking boots and a mountain goat for a caddie, at least on the first few holes. “Play the course as you find it and play the ball as it lies,’’ advises the pro shop sign. “After the round is over . . . don’t complain and don’t explain.’’

How to explain a course that seems to reach to the horizon, a botanist’s delight of white pasture thistles, cat greenbriar, broom crow-berry, racemed milkwort, and scarlet pimpernel, where every lie is up, down, or sideways? The distances are arrhythmic: 250 yards to 460 to 160 to 379. On the second hole, a par-5 where the drive soars into a vast valley below, we need a howitzer to reach the green. The third hole is a par-3 straight uphill, the fourth a doglegged par-4 brute. The par-4 fifth seems to extend all the way to Spain.

After an hour of this, it no longer makes sense to keep score. Yet just as we are on the verge of tossing our clubs into the Atlantic Thoreau’s place of wonder provides a parting gift — a par-3 birdie hole tucked in so snugly behind the Highland House museum that an errant tee shot would part the drapes. A straight one all but guarantees a par and a buoyant sendoff to Chatham, 30 miles to the south toward the bottom of the Cape’s elbow.

The Seaside course, which was carved out in 1895 as part of the Chatham Bars Inn but now is owned by the town, is treacherously seductive because it appears easy. It’s a par-34 with only one hole longer than 280 yards, but most of them can sabotage you, especially on a windy day. When we play there the following morning the weather is overcast, blustery, and spitting rain, classic St. Andrews conditions.

It is a day better for irons than for woods, particularly on a layout that generally punishes any shot that overshoots the green. (And on most holes, you can’t see the pin from the tee.) Yet there’s enough forgiveness on some holes that you can make par with one strong shot and a bit of luck. That’s what I do on the sixth hole, which plays only 268 yards but looks to be 368 because the two-tiered green is down the hill.

After a crosswind pushes my tee shot far to the right in the rough next to a tree, I thwack a 3-iron back across the fairway and down to the rough left of the upper tier of the green. A semi-skulled sand wedge puts me back in the rough alongside the lower tier, from where I chip in from 20 feet for a most unlikely par. Chatham Seaside can be unexpectedly generous that way, just before it makes you pay double.

The eighth hole, which presents an eagle opportunity for anyone who drives the green, is followed by a finisher that demands a tee shot over both a marsh and a steep rise, with a second shot that probably will leave you with an uphill pitch that’s as likely to bounce across the street as land on the green. Some people may have reached in two, but not when I’ve been around.

More often it’s a 10-foot putt even to make bogey, hoping that the ball doesn’t roll off the green and back down the hill. There are days when a 7 is a good score on a par 4, both here and elsewhere on the Outer Cape. Thoreau didn’t bring his sticks with him, but he would have learned that with one trip around the lighthouse.