Priceless and affordable, rare and rejuvenating, there is plenty to sample and savor if you look around this lovely peninsula 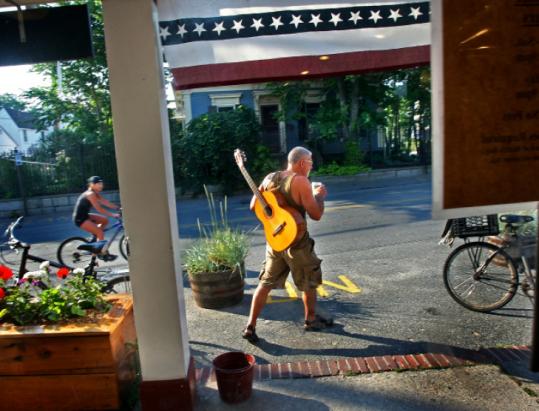 EASTHAM - Those who know the outer Cape know that its subtle charms and salt-sprayed majesty are nestled nearly everywhere. An exit from Route 6 can quickly turn up perfect terrain for soft adventure or idle hours outdoors.

So the outer Cape is a good place, particularly outside the high months July and August, for two travelers to spend two days for under $200 (not counting gas). Here is one way to do that.

In the tides of time, this stretch of sand backed by salt marsh on the bay side of the Cape looms large: It is the site, on a December day in 1620, where Myles Standish, William Bradford, John Carver, and others, including three sailors of the Mayflower Company, met members of the Nauset tribe. Historical accounts speak of flying arrows and muskets fired into the darkness, auguring the centuries of settlement that followed. Today the beach, managed by the town of Eastham, is nothing if not tranquil, a perfect place to get your feet wet on a warming morning and settle into the rhythms of tidal life.

This get-it-on-the-go staple of the Cape has six locations, and the one here is just a short drive north once back on Route 6. You can order the rolled pita (a "Rollwich") filled with everything from seafood salad to roast beef. But if you're still in the Pilgrim mood, try the John Alden: turkey with cranberry sauce, mayo, lettuce, tomatoes, and onions. Then continue on for a picnic.

In 1903, antennae set atop four wooden towers broadcast the first two-way wireless message between Europe and the United States. The hungry ocean has eroded much of the site and the bluffs beneath, but you can stand near a model of the towers and type a text from your BlackBerry. Better to disconnect, look out at a sweeping view of the sea, and then grab a spot on a bench to enjoy lunch.

Refueled, you can head off for two very different looks at the nearby natural world. The first is a one-mile round-trip hike to an Atlantic White Cedar Swamp, a wet woodland home to pinus rigida (the ubiquitous pitch pine); high bush blueberry; red maple; and bear oak, a slight, gnarled survivor of a tree that seems to outlast whipping wind with sheer willpower. A boardwalk trail meanders through the still swamp before meeting up with the old wireless road and a short uphill walk back to the parking lot. Repair then to nearby Marconi Beach to finish out the afternoon with surf and sun.

Tired and hungry? Drive north again on Route 6 and stop to order a pizza to go from a restaurant that lives up to its name. Offerings include classic margherita (tomatoes, mozzarella, basil, and sauce), tutto (herbed mushrooms, onion, green pepper, banana pepper, pepperoni, sweet Italian sausage, black olives), and more. A convenience store nearby carries growlers of Cape Cod Beer IPA, so grab something cold to go with the hot and head north another minute or two.

Evening: Cape View Motel, Truro OK, spending a summer evening in a motel may seem short-sighted. But consider that rooms here come with balconies that offer a sweeping view of the bay and swaths of sand dunes stretching north to Provincetown. Settle into a chair for pizza and beer and enjoy the sunset, the lights of Provincetown, and the stars overhead. Turn in early, dream deeply, before an early morning drive north on Route 6.

Breakfast: Far Land Provisions, Provincetown Far Land offers up strong brew and fresh-baked breakfast items, including blueberry muffins, scones, and cinnamon rolls. Relax in a rocker on the porch with the Cape Cod Times, then head back inside to order a prepared lunch to go. Gourmet takes on picnic fare include: spicy fried chicken, baby back ribs, mini corn dogs, grilled asparagus, and more. Well-stocked for later, you can choose to wander the streets and shops of Provincetown. Better, though, if weather is on your side, to return to the sea.

Morning and lunch: Province Lands Visitor Center and Race Point Beach, Provincetown There are more woodlands to wander, with the Beech Forest Trail, and history to ponder, at the Old Harbor Life-Saving Station Museum. But Race Point Beach offers an especially expansive view, set as it is at the northern end of the Cape. Midmorning, the light just right, water shimmers in spots from silver to black. Look offshore long enough, and there, on the surface, emerges a large animal's back. Whale? After an idle hour or two, the question seems less urgent than the spicy fried chicken waiting by your side. So tuck into lunch, then head south for some soft adventure.

Afternoon: Highland Light, Truro Vineyards, Wellfleet bookstore There are views aplenty to be had while heading south on Route 6, such as that from the deck just beyond Highland Light. (Golfers, too, will find plenty of play on the historic Highland Links, as fair a representation of the old country as a golfer may find on this side of the ocean.) Oenophiles have one choice on the outer Cape, but it is nearby, at Truro Vineyards, where free tours can lead to a tasting of chardonnay or cabernet franc. Others craving the indoors could do well to choose one particular shop, Herridge Books, of Wellfleet, which features in its window such volumes as "On the Road," by Jack Kerouac; "Hugging the Shore," by John Updike; and "Oh, the Places You'll Go!" by Dr. Seuss.

No matter your choice, it will soon be time to turn south on Route 6 again, more focused now on heading for home. Wait! It is worth one last stop, at the Hot Chocolate Sparrow, in Orleans, for a jolt of strong coffee, or a double scoop of Death by Chocolate. Not a bad way to end it all.