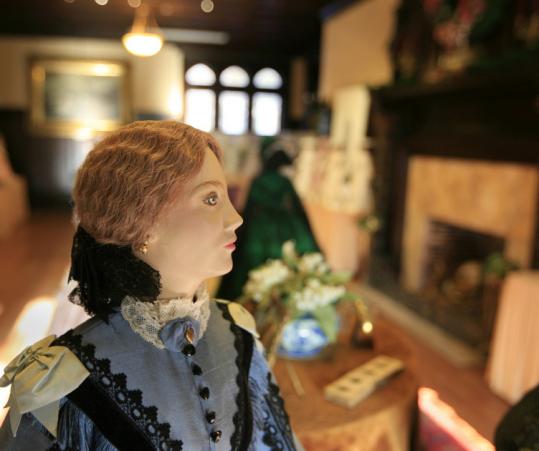 Over the later decades of the 19th century some of the country's wealthiest families took up summer residence in the Berkshires. Society people from Boston and New York and literary and artistic luminaries were drawn to the clear mountain air and pristine hills, valleys and lakes. Equally alluring was that the area offered a less formal setting than Newport.

It was the Gilded Age, the post-Civil War and post-Reconstruction era, and the nation was enjoying unprecedented prosperity. The Astors, Westinghouses, and their peers spared no expense building, furnishing, and landscaping mansions that they called "cottages."

About 75 such estates were built in Lenox and Stockbridge from the 1860s through the 1920s. Sadly many have succumbed over time to fire, demolition, or abandonment. Yet some remain for us to enjoy.

A handful have become exclusive resorts and hotels, such as Blantyre, Cranwell, and Wheatleigh. Tanglewood, once the warm-weather retreat of the Tappan family, has been the summer home of the Boston Symphony Orchestra since 1937. A few others have been preserved and are open to the public as museums devoted to portraying how their privileged inhabitants spent summers.

One such gem is Naumkeag, the estate of Joseph Hodges Choate, a Salem lawyer who increased his wealth by defending the interests of the new industrial aristocracy. Among his accomplishments was persuading the Supreme Court to declare the federal income tax unconstitutional, a decision that stood up for nearly 20 years. In 1884, Choate consulted his close friend Charles McKim, of the architectural firm McKim, Mead, and White, about building a house in Stockbridge for himself and his wife, Caroline, and their five children. McKim assigned his colleague Stanford White to lead the project.

The Choates wanted a refuge, a place that would favor family living over large-scale entertaining. White designed a house with an eclectic, playful design that combined shingle-style and French Norman features. The east elevation, the formal side of the house that visitors would see on their approach, takes inspiration from Normandy, with its salmon-colored brick laid in a diamond pattern. The less formal west façade at the back of the house is made of wood and covered with shingles, punctuated by porches, dormers, and cross gables. The rooms contain cherry, oak, and mahogany paneling, ornate plaster, and brass and silver hardware. The sweeping lawns and terraces were the setting for countless parties and games of croquet.

After her parents died, Mabel Choate took over Naumkeag. She created world-class gardens in collaboration with Fletcher Steele, whose work on the grounds was central to his development as one of the leading US landscape architects of the era. The duo adapted modernist principles into the gardens that include the Blue Steps, a series of deep fountain pools flanked by four flights of stairs climbing up a gentle hillside and overhung by birch trees. After Mabel Choate's death, the house was donated to the Trustees of Reservations. Today, the interior is complete with original furniture, ceramics, and artwork collected by the Choates from America, Europe, and the Far East, along with more mundane items such as their informal glassware and neatly labeled linens.

The most elaborate of all the cottages, as well as the most expensive to construct - in 1894 it cost a whopping $900,000 - was Ventfort Hall. The Elizabethan Revival mansion with an exterior of brick and Longmeadow redstone was built for George and Sarah Morgan, J.P. Morgan's sister. The design was the most ambitious project of Boston architect Arthur Rotch, who adorned the opulent Stockbridge house with stained-glass windows and ornate plasterwork. Spreading over 28,000 square feet, the house included a billiard room and bowling alley, and the latest modern amenities: 13 ventilated bathrooms, an elevator, burglar alarms, and central heating. The house and its numerous outbuildings took nearly 40 servants and groundskeepers to keep it all going.

The Morgans had passed away by 1911, and for the next 70 years, Ventfort Hall's succession of owners used it for various purposes including a ballet school and a hotel. In the early 1990s, it appeared that the estate was doomed. A developer had bought it with plans to tear it down to build a nursing home. In response to the threat, the Ventfort Hall Association was formed, and with the help of private donations and loans, it bought the house with the intention of restoring it to its original splendor. Now, more than a decade later, Ventfort Hall dazzles.

According to Jeffrey Folmer, the estate's executive director, the house was in very poor shape when the association took it over. "A lot of people said to us, 'This is crazy; the place is a lost cause.' Ice and rain had significantly damaged the interior. There were holes in the floors. In fact, from the third level you could see straight down to the basement," he recalled. But efforts prevailed, and the renovations to the first level are complete, and parts of the second floor will be open to the public by the end of the summer.

While none of the estate's original furnishings remain, the house has been restored according to its original layout and interior design. Most impressive is the Great Hall, the setting of Sarah Morgan's lavish parties, where a hand-carved, three-story stairway leads to a balcony with stained glass windows as a backdrop. From this "minstrel's balcony" orchestras played for the parties below. When first built, the dining room, with its pale blue grass paper walls and massive fireplace, was paneled with rare Cuban mahogany. Today the room mirrors its earliest incarnation, save for some of the paneling, which is made of equally rich Honduran mahogany.

Besides serving as a house museum, Ventfort Hall is also a cultural venue providing a year-round schedule of plays, lectures, and children's programs. It also encompasses the Museum of the Gilded Age, devoted to exploring the role the Berkshires played in that fabled era through photos of the cottages and stories of the people who lived in them. Other exhibits include the ongoing "Les Petites Dames de Mode" in which about five dozen 29-inch mannequins portray the history of women's fashion from 1855 to 1914.

When novelist Edith Wharton arrived in Lenox, she believed she had found a place where she could get on with her writing. She and her husband, Teddy, purchased property overlooking Laurel Lake in 1901. Edith immediately set about conceiving the design for her summer haven, The Mount, based on the principles of classical proportion and symmetry in place of Victorian clutter outlined in her first book, "The Decoration of Houses" (1897), co-authored with architect Ogden Codman Jr.

The architecture of the striking white stucco house, set off by black shutters, was inspired by a 17th-century Palladian-style English country manor, with additional influences from Italian and French architecture. Clusters of gables and white chimneys rise from the roof, which is capped with a balustrade and cupola. Wharton, an ardent horticulturalist and expert on European landscape design, was particularly proud of her lavish gardens, an elegant series of outdoor rooms.

While Wharton considered The Mount the only true home she ever had, she summered there for less than a decade and like Ventfort Hall, the estate went on to suffer extreme neglect. By the 1980s, the 42-room house had fallen into disrepair, and the gardens had virtually disappeared. A 10-year effort to resurrect the property began in the late 1990s.

Today, the character-defining elements of Wharton's design reflect their early grandeur. The rooms blend European styles in harmony. Hand-carved French rouge marble fireplaces coexist with the terrazzo floors she became enamored with in Italy. The library, with its original quarter-sewn oak wood paneling, contains her 2,600 volume collection which includes copies of Wharton's works, as well as rare first editions that she owned, including "Alice's Adventures in Wonderland" by Lewis Carroll. The books are filled with her marginalia.

A brick-floored terrace runs along the east side of the house and is accessible through French doors from all of the rooms on the main floor. Restored gardens include an Italianate walled garden, a formal flower garden, an alpine rock garden, and a lime walk.

But restoring the glory of such a magnificent cottage came at a high price. In February, The Mount was informed that $3 million was needed before Oct. 31 to avoid foreclosure. As of late August, about $1.2 million had been raised. The estate is committed to overcoming the crisis, says Susan Wissler, the acting director. "We are optimistic that we'll make our goal."

Jaci Conry can be reached at jconry77@aol.com.

Weekend of the Gilded Age
Sept. 12-14
The celebration begins Friday at Ventfort Hall with Sarah Morgan's Soiree, an evening of Victorian parlor games and a buffet of Gilded Age treats. Saturday at 1 p.m., the annual Lenox Tub Parade proceeds through the center of town. In the Gilded Age, summer residents closed their mansions in September and marked the season's end with a parade down Main Street showcasing their prized horses, carriages (also known as "tubs"), and flowers from their gardens. The re-creation of the parade will feature festooned antique carriages with women passengers in lavish chapeaus and gentlemen dressed in their coaching finest. Afterward, Ventfort Hall will hold an ice cream social and in the evening a grand gala. On Sunday from 10 a.m.-4 p.m., The Mount hosts Gilded Age Family Picnics, to which visitors are encouraged to bring their lunches to enjoy on the estate's grounds. Activities for children are planned.
For information, contact Ventfort Hall at 413-637-3206.
Naumkeag
Prospect Hill Road, Stockbridge
413-298-3239
thetrustees.org/pages/335_naumkeag.cfm
Daily Memorial Day-Columbus Day 10 a.m.-5 p.m.
Ventfort Hall
104 Walker St., Lenox
413-637-3206
gildedage.org
Daily year-round 10 a.m.-3 p.m.
The Mount
2 Plunkett St., Lenox
413-551-5111
edithwharton.org
Daily through tomorrow 10 a.m.- 5 p.m., through Oct. 31 10-4.