Rescued or refurbished, serving breaksfast or after the bars close, these lunch cars vintage 1907-57 still cook on all burners 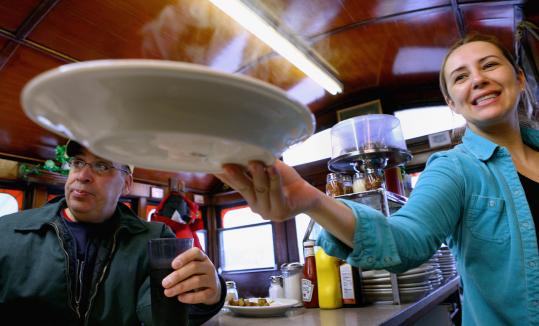 At the Boulevard Diner in Worcester, a National Historic Landmark that was built in 1936 and has been family-run since the 1960s, Emily Palmas serves a plate of eggs . . . over easy. (Wendy Maeda/Globe Staff)
By Patricia Harris and David Lyon Globe Correspondents / March 7, 2010

The eight most comforting words in the American vernacular must be, “Can I warm that up for you, hon’?’’ Or so it seems when dawn is breaking, the grill is sizzling, and you’re hunched on a stool reading a newspaper over coffee.

Between 1907 and 1957, the Worcester Lunch Car and Carriage Manufacturing Co. built 651 diners. Only a fraction survive, but with their porcelain-enamel exteriors and real wood trim, they are as timeless as the reasonably priced comfort food on their menus. Here are 10 of them.

“I can’t believe how many people stand across the street and take pictures of this place,’’ says Mary Jane Simone, grill cook. “This diner has been sitting on this spot since 1948.’’ In fact, it was the showcase model for the Worcester Lunch factory across the street. Simone and owner Kim Kniskern brainstorm the inventive breakfast menu, which includes ethnic variations of eggs, home fries, and toast such as American (with steak tips), Polish (with kielbasa), and Polynesian (with fried Spam). Miss Woo regulars find the diner a comfortable groove. “I pretty much know what to throw on the grill when they come in the door,’’ says Simone. 300 Southbridge St., 508-753-5600. Breakfast $2-$7.95, sandwiches $2.25-$6.95, plates $6.95-$8.95. Cash only.

Thursday through Sunday nights after the bars close are the busiest times at this National Historic Landmark, says manager Lisa Carenzo. That and weekend mornings. Although it’s an all-night establishment (complete with glowing neon), the Boulevard rarely has the lonely feel of Edward Hopper’s “Nighthawks.’’ With just 14 stools and five vintage wooden booths, it’s always packed. Carenzo says the 1936 diner has been in her family since the 1960s; her grandfather had started as a dishwasher at age 12. Eggs, burgers, and tuna melts are on the menu, but regulars favor the lasagna, manicotti, and chicken parm sandwich. You can even get the meatballs, sausage, and sauce to go. 155 Shrewsbury St., 508-791-4535. Breakfast $4.65-$8.25, sandwiches $1.95-$6.95, plates $6.95-$11.25.

Owner Chris Giannetti can point out some rare vintage touches at his compact yellow-and-red diner, like the discreet brass and enamel plate that identifies it as #765 (which means it’s the 565th Worcester diner, since numbering began at 200). It was delivered to Fitchburg in 1940, and Giannetti has owned it for 16 years. He and his brother sanded and stained the oak panels to restore the interior wooden trim. Even his mother is involved. Giannetti handles the usual breakfast dishes, burgers, and sandwiches, but Mom makes the puddings, cobblers, and cakes. 6 Myrtle Ave., 978-343-9549. Breakfast $2.50-$6.75, sandwiches $2.25-$5.50.

In 2000, Jamie Floyd, formerly a waitress, traded her order pad for a grill cook’s spatula when she bought the Blue Moon (Worcester #815) and set about getting it listed on the National Register of Historic Places. Fifties memorabilia abounds and bygone stars make cameos on the menu. The Big Bopper breakfast, for example, includes eggs, toast, home fries, and a choice of homemade roast beef or corned beef hash. The Elvis burger is dressed with peanut butter and bananas. The wooden addition has the patina of age, but hardcore diner fans favor the 14 stools and five booths of the original dining car. Is it better to be an owner than a waitress? “The headaches are better,’’ Floyd says. 102 Main St., 978-632-4333, www.bluemoondinergardnerma.com. Breakfast $3.45-$7.25, sandwiches $3.95-$6.95, lunch plates $9.25.

Aficionados might remember this 1950 diner as northern Vermont’s Miss Newport. Car mogul Kevin Meehan rescued it from “a boneyard’’ and restored it to vintage glory as an amenity to his Imperial auto dealerships along Route 16. With re-chromed stools and a new entry crafted to match the original dining car, the Miss Mendon opened in January with an unusually extensive comfort-food menu. It’s already doing a bustling business, which shows that there’s no keeping a good diner down. 16 Uxbridge Road, 508-634-3000, www.missmendondiner.com. Breakfast $1.95-$10.95, sandwiches $4.99-$8.99, plates $8.95-$17.99.

Proof that good things come in small packages, 10-stool Casey’s is so compact that the entry is through a sliding door and there are no booths. There is, however, a window on one end, and cook-waiter Eric Slaney says, “Even when it’s 5 degrees outside, people are lined up at the takeout window.’’ Chances are they’re ordering either the diner’s famed steamed hotdogs or its juicy burgers. One of the oldest Worcester diners in these parts, it was built in 1922 and purchased by the Casey family in 1925. They’ve been running it ever since. Over the years the exterior has been reclad in wood, but the interior gleams with the patina of 85 years of good grub. 36 South Ave., 508-655-3761. Sandwiches $2.25-$3.90. Cash only.

Martha Kazanjian was 7 when her family bought the Owl in 1982, “but I tell people I was born in a booth,’’ she says. Kazanjian seems to know most of her customers by their first names, from the families who pile into the booths on weekends, especially after church, to the police and politicos who stop by for coffee on weekday mornings. No one leaves hungry. Grill cook Wayne Kasilowski says that “construction workers come in for breakfast so they can skip lunch.’’ Daily specials like American chop suey on Monday or baked haddock on Friday rarely change. “We have to keep on a schedule,’’ says waitress Kerrie Peasle, Kazanjian’s cousin. “The regulars are used to it.’’ 244 Appleton St., 978-453-8321. Breakfast $1.75-$10.50, sandwiches $5.50-$7.50, plates $6.25-$7.50.

This 1952 stainless steel and enamel beauty serves comfort food with a twist. Only open for lunch and dinner, the diner is dedicated to Thai street food. Instead of burgers and fries or eggs and hash, the kitchen whips up generous plates of pad thai and tamarind duck. Rather than banana cream pie, dessert might be deep-fried bananas wrapped in egg roll skin or ginger or green tea ice cream. Lanna Thai is one of the rare diners that specifies the heat levels of its dishes and proudly announces, “We do not use MSG.’’ 901c Main St., 781-932-0394, www.lannathaidiner.com. Plates $7.95-$9.95.

There might be a long wait for one of the six booths on a weekend morning, but this spacious 1954 stainless-steel diner has 20 stools, so you can belly up to the bar and watch the grill cook work a little magic as the waitresses stream in and out of the kitchen. While you await your order, you can scan the four large flat-screen televisions tuned to various sports channels. Pop culture memorabilia highlights the ’80s, the decade that gave us the teen angst movie for which the diner is named and the original “Diner’’ with a pre-degenerate Mickey Rourke. 270 Western Ave., 617-783-1212. Breakfast $2.99-$8, sandwiches $5.29-$7.49, plates $6.49-$12.89.

Walking into the Rosebud during the day is like stepping through a time warp to an era when the waitresses called everyone “dear’’ and “hon’ ’’ and the daily specials came with a terrific soup. Ask Helen DeFrancisco what kind of soup it is and she’ll say “good, homemade soup.’’ Although the Davis Square institution is known for its evening bar and music scene, the streamline restaurant section lives up to its billing as “Somerville’s home cooking diner since 1941.’’ Helen’s Famous Bloody Mary offers something of a variation on the theme. “I make my own hot sauces in four different flavors,’’ DeFrancisco says. “It started as a joke, but my customers wanted me to make them hotter. It just took off.’’ In fact, you can get one of Helen’s specialties at 8 a.m. six days a week. “On Sunday we can’t serve until 11,’’ she explains. 381 Summer St., 617-666-6015, www.rosebuddiner.com. Breakfast $1.25-$8.95, sandwiches $6.50-$7.95, plates $10.95-$16.95.