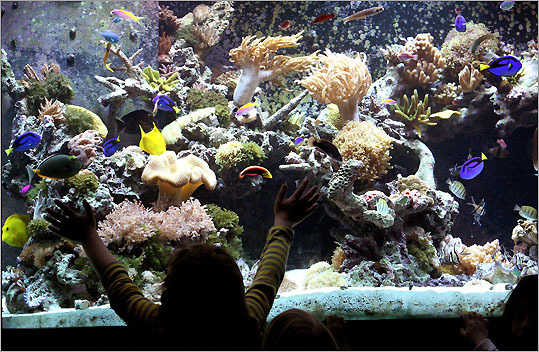 The coral reef tank at the Ocean Explorium hosts a rainbow of species from all over the South Pacific. (Essdras M Suarez/ Boston Globe)
By Christopher Klein Globe Correspondent / December 20, 2009

NEW BEDFORD - Standing sentry over Union Square, the grand neoclassical structure that was once headquarters of the New Bedford Institution of Savings is now a repository for wealth of a different kind. These days the former financial temple harbors the riches of the sea, having been transformed into the Ocean Explorium, part aquarium and part science museum. Since its grand opening in July, New Bedford’s newest attraction has quickly become a popular family destination.

Green may have been the important color in the building’s past, but as soon as you set foot inside the soaring lobby today, you are struck by a kaleidoscope of vibrant hues, from aquamarine waters to dazzling pink coral to vivid green-and-blue images of Earth. The hushed tones of bank tellers have been replaced by childhood exclamations of discovery - “Whoa!’’ “Cool!’’ - echoing off the marble walls.

The centerpiece of the Ocean Explorium is the massive blue cube that houses the Science on a Sphere exhibit. Visitors who step inside the cube’s darkened interior are greeted by a rotating, three-dimensional image of our planet, seemingly hovering in midair like a “Star Wars’’ hologram.

Computers and multiple video projectors create motion animation of Earth and other celestial bodies, graphically displaying historical and real-time scientific data captured by satellites on the exterior of the 68-inch-diameter sphere. One minute you can watch the seas recede to reveal the depths of the ocean floor, the next you can be astonished as the globe becomes speckled with many thousands of dots representing commercial aircraft in flight.

The Explorium can present upward of 20 narrated programs on the sphere. Visitors can learn about natural phenomena - such as global weather patterns, earthquakes, and lightning strikes - as well as man-made activities that affect the planet, such as squid fishing off Japan or slash-and-burn agriculture in sub-Saharan Africa.

The Explorium’s Science on a Sphere exhibit, developed by the National Oceanic and Atmospheric Administration, or NOAA, is one of only 41 in the world and the only one in New England. The animation is mesmerizing with brilliant colors and amazing detail. The bright orange, red, and yellow glow of an X-ray of the sun feels as warming as a roaring hearth on a snowy day.

The power of Science on a Sphere is its ability to visually communicate environmental issues on a global scale. “It’s great for interpreting complex information,’’ says Mark Smith, executive director of the Explorium. “It uses technology to bring issues to life, and it’s a starting point to tell stories, such as those about sea-surface-temperature abnormalities and coral bleaching.’’

The Explorium’s six aquatic exhibits, holding 150 types of organisms from waters near and far, build from the sphere’s big-picture programs to make a more direct connection. “We bring the global phenomena home with local and living exhibits that resonate on a personal level,’’ Smith says. “We can talk about the worldwide threats to aquatic species on the sphere and then take visitors to see examples of the coral or seahorses under threat.’’

The Explorium has tanks that feature jellyfish and New England aquatic life, such as cod and scallops, on whose back this seaport was built. (If you’ve never seen a scallop that hasn’t been wrapped in bacon, you can gaze at one as it stares back with its dozens of tiny eyes.) Children can reach into the touch tank and experience the tactile sensation of holding sea urchins, horseshoe crabs, and starfish. “Finding Nemo’’ fans will gravitate to the anemone tank to watch their favorite orange-and-white fish swim about.

The most spectacular exhibit is the coral reef. The explosion of color makes a high-definition plasma television look like an old Philco. The fluorescent fish darting around and the rainbow of coral are from Fiji, Tonga, Australia, Indonesia, and other areas of the South Pacific. It can be hypnotic to stare at the fish or be enraptured by the colorful coral, but visitors who examine the tank more closely will see other wonders of the specialized ecosystem, such as a camouflaged sea hare slug hanging out on a wall, hermit crabs and snails tiptoeing on the sandy bottom, and bugs and worms squirming below the surface.

Unlike at most aquariums, the pumps, filters, and other tank equipment are out in the open. “We wanted to show visitors all the machines so that they get the concept of how it works,’’ says curator Warren Gibbons. “Part of what we want to do is demonstrate how the tanks function.’’

The Ocean Explorium stages many activities to carry out its mission to increase knowledge of the importance of oceans and science in daily life and reconnect the community to the sea. “Education is woven into the DNA of this institution,’’ Smith says. “It wasn’t an add-on. Sensory education is what we are all about.’’

The science center takes its programs outside its walls to the surrounding communities. Its WOW Mobile, a van equipped with touch tanks and scientific equipment, ventures to local schools and community centers. During the summer, an EnviroLab boat takes students out to Buzzards Bay for experiential learning at sea.

The Ocean Explorium is smaller than some other aquariums and science centers in New England, but its education focus lured Smith, an Australian-born marine biologist, from his previous position as director of one of Europe’s largest aquariums, the Oceanário de Lisboa in Portugal. “I’ve been intrigued by the whole learning approach,’’ he says. “This is a more modest project than others I’ve been involved in, but the reach is larger and using the Science on a Sphere as a catalyst is just so unique.’’

Opening a new attraction in the middle of an economic downturn was an unexpected challenge facing Smith, but the early returns have been promising. Over 30,000 visitors, including 5,000 students, have visited the Explorium this year. And, as Smith adds, “people in New Bedford are used to working under strict financial conditions.’’

Another boost for the Explorium has come from hosting the traveling exhibition put together by NASA that highlights the deep-space discoveries of the Hubble Telescope. The exhibit, open through mid-January, features images of galaxies and black holes, a scale model of the telescope, and interactive computer games and videos showcasing how the telescope works.

New exhibits are planned for next year, such as a sting ray and shark tank, a “Living Laboratory’’ with juvenile marine organisms such as baby seahorses and larval lobsters, and a coral farm. Smith is hopeful that as the Explorium grows, it will continue to add to the revitalization of downtown New Bedford and attract visitors. “After all, we have the whole world on display here,’’ he says.