THIS STORY HAS BEEN FORMATTED FOR EASY PRINTING
A tank away

Go down to the sea again

Seafaring heritage takes visitors from past to present 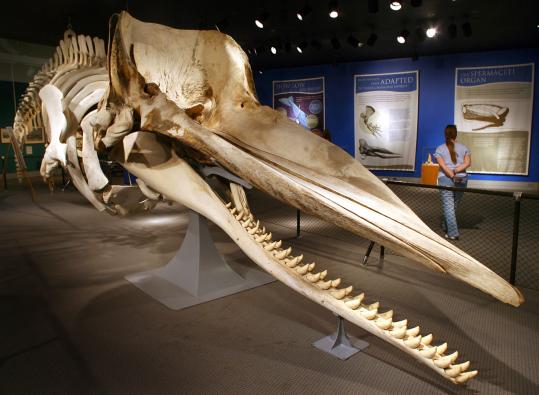 In the 1850s this was the richest city in the country due to the fortunes amassed by whaling ship captains.

Today New Bedford’s harbor is the richest fishing port in the nation based on the dollar value of the catch, thanks to the high price of scallops. Whaling and fishing are at the heart of the city’s 13-block, 34-acre New Bedford Whaling National Historical Park, established by Congress in 1996. A stone’s throw from Interstate 195, visitors can walk cobblestone streets and learn about life in the “City That Lit the World.’’

Stay
Several of those early ship captains’ homes have been turned into bed-and-breakfasts. One of the loveliest is The Melville House (100 Madison St., 508-990-1566, www.melvillehouse.net, doubles $130-$175), an 1855 Italian Empire house once owned by author Herman Melville’s sister, Katherine. It stands on a historic street lined with 19th-century federal and Victorian mansions. Three miles from the historic district, Days Inn (500 Hathaway Road, 508-997-1231, www.daysinn.com, doubles $69-$149) has a heated indoor pool. The Lafrance Hospitality Co. has begun construction on a five-story, 106-room hotel on the waterfront, which is due to open next summer.
Dine
Got fish? For the most part, New Bedford’s restaurants take advantage of the city’s maritime bounty and Portuguese heritage. Davy’s Locker (1480 East Rodney French Blvd., 508-992-7359, www.davyslockerrestaurant.com, $5-$23) is a rustic building with a fantastic ocean view and a tiki hut right on the water. While the menu emphasizes fish, you can get a hamburger for $5 - with french fries and cole slaw, no less. In the heart of the historic district, Freestone’s City Grill (41 William St., 508-993-7477, www.freestones.com, $7.50-$20) occupies the handsome 1877 Citizen’s National Bank building. Try the homemade fish chowder, the signature Oriental turkey salad, or honey-baked New Bedford scallops. Kids eat free on Wednesdays after 5 p.m. We didn’t order the paella at Antonio’s (267 Coggeshall St. 508-990-3636, $8-$25), but nearly everyone around us did, prompting a “note to self’’ for our next visit. We opted for the artery-busting steak Antonio’s style, a 16-ounce grilled sirloin topped with ham and fried eggs, and, like everyone else, walked out with a doggie bag. Portuguese bakeries crowd the area north of downtown along Acushnet Avenue. At Lydia’s Bakery (1656 Acushnet Ave., 508-992-1711) you can grab a table to enjoy linguica calzone or nata, pastry cups filled with custard, almond, or coconut.
During the day
Start at the National Park Visitor Center (33 William St., 508-996-4095, www.nps.gov/nebe) in another stately former bank building, where you can pick up brochures and maps and sign up for walking tours in summer. Then check out the 48-foot skeleton of a sperm whale at the New Bedford Whaling Museum (18 Johnny Cake Hill, 508-997-0046, www.whalingmuseum.org). Kids can get a taste of the whaling life by exploring the world’s largest model ship, a replica of the New Bedford whaling ship Lagoda, or squeezing into the cramped quarters of a fo’c’sle, where anchors were stored and the crew often slept. The Ocean Explorium (174 Union St., 508-994-5400, www.oceanexplorium.org, open Thursday-Sunday, holidays, and school vacation weeks) looks at ocean life and science, with a coral reef aquarium and touch tank. Elephants and seals are popular attractions at Buttonwood Park Zoo (425 Hawthorn St., 508-991-6178, www.bpzoo.org). Fort Taber Park, on a peninsula jutting into Buzzards Bay, features a Civil War fort, bike paths, benches overlooking the sea, and a terrific playground.
After dark
The Zeiterion Theatre (684 Purchase St., 508-994-2900, www.zeiterion.org) has been restored to its 1923 grandeur, with golden muses dancing across the proscenium, a Wurlitzer organ, and the original crystal chandelier, retrieved from a Newport mansion. Performances cover a broad spectrum from dance to rock to children’s shows. On Dec. 19, the resident New Bedford Symphony Orchestra will present two performances of a family holiday pops concert at 3:30 and 7 p.m. On the second Thursday of each month, from 5 to 9 p.m., the city hosts AHA! Nights (508-996-8253, www.ahanewbedford.org), a free celebration of arts and culture downtown. Museums and galleries are open late, and concerts and crafts demonstrations are often on the program. The Dec. 10 event will focus on the holidays.

Ellen Albanese can be reached at ellen.albanese@gmail.com.