When whales made kings

Melville sailed from a rich and powerful New Bedford, and its remnants remain grand today 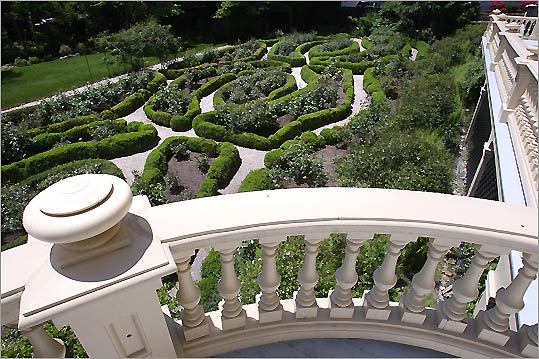 (Bill Greene/Boston Globe Staff) The garden at the Rotch-Jones-Duff House in New Bedford reflects the architectural aspirations of the men made rules of their industry by the demand for whale products.
By Christopher Klein Globe Correspondent / June 28, 2009
Text size – +

NEW BEDFORD - Two days after the dawn of the new year in 1841, the whaler Acushnet tiptoed into frigid New Bedford Harbor, the first small steps on a lengthy voyage to the hunting grounds of the South Pacific. As the crew hoisted the newly christened vessel’s sails into the chill winter wind, they probably dreamed not only of warmer climes, but also of the great wealth that surrounded them in New Bedford, the whaling capital of the world. The city was among the richest in America, a commercial behemoth as massive as the leviathans its mariners harvested from the sea.

Among the names inscribed on the Acushnet’s crew list was that of a 21-year-old young man thirsty for adventure: Herman Melville. His voyage on the Acushnet served as inspiration for “Moby-Dick,’’ and the epic novel not only tells the salty tale of the elusive white whale, but also chronicles the prosperity of New Bedford at a time when whale oil and spermaceti candles powered the world.

“The town itself is perhaps the dearest place to live in, in all New England,’’ Melville wrote in “Moby-Dick.’’ “Nowhere in all America will you find more patrician-like houses; parks and gardens more opulent, than in New Bedford.’’ While not on par with the lavish palaces built by today’s Russian oil barons and Middle Eastern sheiks, New Bed ford’s Yankee whalers constructed stately homes with their wealth and the Greek Revival mansion built by William Rotch Jr. was probably among those Melville recalled in that passage.

Rotch’s 28-room manse, now the Rotch-Jones-Duff House & Garden Museum, is the best-preserved example of New Bedford’s “brave houses and flowery gardens’’ that Melville described in “Moby-Dick.’’ The house, built in 1834 and part of the New Bedford Whaling National Historical Park, is named for the three families who lived under its roof over a span of 150 years.

The Rotch, Jones, and Duff families all had roots in the whaling business, and the home’s period rooms reflect their lives and times. “We faced the dilemma of focusing on a particular time period or respecting the integrity of the house,’’ says Kate Corkum, the museum’s executive director. As a result, guests step through rooms that range from Victorian parlors to Art Deco bathrooms.

To better tell the stories of the first owners, the museum recently unveiled a permanent exhibit in the home’s former library titled “Lighting the Way: The Life and Legacy of William Rotch Jr.’’ According to historian Joseph Lawrence McDevitt, “The Rotches were to whaling what Andrew Carnegie and John D. Rockefeller were to steel and oil.’’ Through interpretive panels and artifacts, the exhibit explores the rise of the America’s preeminent whaling family and its connection to New Bedford.

William Rotch Jr. used his family fortune to escape the congestion of the grimy waterfront to the much more fashionable address on County Street.

Rotch commissioned a young Richard Upjohn, who would later gain fame as the architect of New York’s Trinity Church and as one of the founders of the American Institute of Architects, to build his estate. Features such as the house’s columned portico, enormous mahogany entrance doors, grand, freestanding staircase, and high ceilings are emblematic of Rotch’s wealth.

The museum’s new exhibit explores how Rotch’s Quaker faith and belief that integrity and honesty were cornerstones of commercial success enhanced his prosperity and helped him survive wars and economic panics.

The exhibit also examines the innovation of the Rotch family in branching beyond the mounting of whaling voyages to handle all phases of production, from harvesting whales to building ships to extracting and refining oil to manufacturing spermaceti candles to distributing the final products in their own vessels.

Rotch had a tremendous passion for horticulture, as did the Jones and Duff families. The garden featured species brought back from whaling voyages along with pears, roses, and dahlias. It is still an urban oasis and a feast for the eyes when abloom in the spring and summer. Along with a cutting garden and a woodland walk, there is a rose garden with undulating rows of boxwoods.

After Rotch died in 1850, the estate was sold to Edward Coffin Jones, one of New Bedford’s most successful whaling merchants. Given that the Joneses were the longest-tenured occupants of the house, it’s not surprising that their touch is most felt inside. The family’s lavish table, chairs, and silver in the dining room reflect a time when New Bedford whaling was at its zenith.