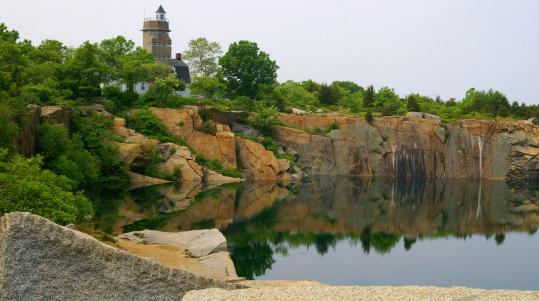 ROCKPORT - John Ratti kneels on the ground and hoists a 12-pound hammer above a block of granite. "I just want to tap it," he tells the small group gathered around him. "You can hear the stone cracking before it splits." His hammer connects with a wedge nestled in a small hole drilled in the stone.

Sure enough, we hear a subtle crack before the granite splits neatly in half. "That's the first breath of air and sunshine these minerals have seen in 450 million years," he marvels, as if he hasn't done this dozens of times before.

Ratti is an interpreter at Halibut Point State Park, 54 acres of woodlands on weathered granite bluffs at the eastern tip of Cape Ann. Many people come to the park to hike the trails, take in the long views from the seaside overlooks, or go to the beach. But it is worth joining Ratti on a Saturday morning walk to get a sense of the heavy lifting that used to take place here.

"Halibut Point is an awesome place," Ratti says. "It's the rock park."

That rock, in fact, is a particularly dense granite that was used to construct the Custom House Tower and Longfellow Bridge in Boston as well as New York's Holland Tunnel and Brooklyn Bridge. The first big quarry began operating in Rockport in the 1860s, and when the industry finally closed down in 1929, more than 30 quarries had been dug. At its height, the quarry industry employed more than 800 workers in the backbreaking task of extracting, cutting, and shaping the stone.

Mostly, the quarrymen cut granite pavers. "The streets of Boston, Salem, New York, Paris, and Havana, Cuba, were all paved with blocks made here," Ratti says. "It was America's first great national and international industry."

After the stone-cutting demonstration, Ratti leads us down a trail to the edge of the Babson Farm Quarry. The main pit measures about 60 feet deep, but since it closed in 1929, rain, runoff, and natural springs have largely filled the gaping hole.

As we walk, Ratti explains that Cape Ann's granite is so dense because it was squeezed between a 100-million-year layer of sedimentary rock on top, and volcanic gases and molten rock seeping from faults in the earth's crust below. When the last glacier retreated about 12,000 years ago, it scraped away the sedimentary rock, exposing the high granite bluffs with their vertical black stripes of basalt that had seeped from the earth's mantle to fill cracks and fissures.

"This is the third most active geological region in the United States after the San Andreas and New Madrid [Missouri] faults," Ratti says. "There have been 28 earthquakes here since the 1700s. On satellite imagery, Cape Ann looks like a cracked windshield."

Workers would begin to harvest the granite by cutting at natural seams. When the quarry closed, everything was left as it was. Ratti points out the remains of crude derricks used to lift blocks from the deep hole, smaller holes that were essentially two-person quarries, and large piles of discarded granite called grout. He examines stones and identifies which were cut by hand and which with a steam drill. You can almost imagine the tap, tap, tap of hundreds of hammers and the clouds of dust that hung in the air.

But nature is reclaiming the quarry and the land around it. "Cape Ann is wilder and more forested today than since the last Ice Age," says Ratti. Bayberry, greenbriar, and shadbush cover the rocky hills. The woods hold fisher cats (a weasel relative) and coyotes.

And other diversions beckon in this stonescape. "After an hour or so talking about geology," Ratti acknowledges, "people want to get out on the rocks, they want to go down to the beach."

Sure enough, trail signs point in both directions.

Patricia Harris and David Lyon, freelance writers from Cambridge, can be reached at harris.lyon@verizon.net.