Greenery to gallery to dockside in Carly Simon's comfort zones 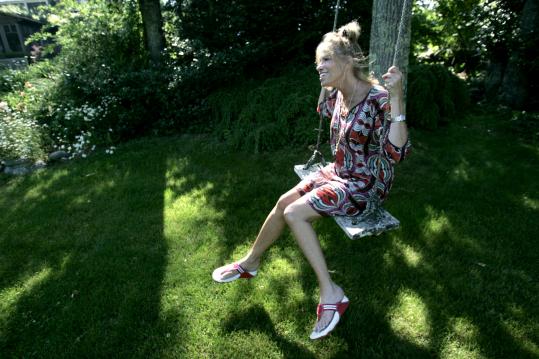 VINEYARD HAVEN -- It's no secret that Carly Simon loves Martha's Vineyard. She lives there year-round and her knowledge of the place is encyclopedic. She resides far down a dirt road, seemingly in another time. Her fairy-tale home is surrounded by lush, landscaped gardens, a carriage house, and a couple of scenic cottages deep in the woods. One of them is accessible by a little wooden, medieval-looking bridge that suggests Harry Potter would love it here.

Simon is proud of her home, but today's goal is to shepherd us to some of her other favorite places on the island. It's a perfect summer day and she bounds out of the house in a red cotton dress and red flip-flops. She describes the dress as a "colorful little summer ditty. It's very lightweight, but covers the important points."

She beckons me and my photographer into her white, hybrid Lexus RX 400h (so much for my rental car). Together with Molly, her Russian poodle, she drives down the road to a house that her son, Ben, has built. Looking like a timeless hippie with sculpted features that echo his dad, James Taylor, Ben greets us briefly and is excited to hear that his mother is playing tour guide, though she remains cryptic as to exactly where we're going.

The nearest town is Vineyard Haven, and that's where we stop first. She apologizes for her driving ("I'm not good with distances -- I think everything is too close!"), but she smoothly pulls into the parking lot behind Midnight Farm , a unique store with wide-open doors leading to a single room full of goods that dazzle the eye. There are summer baskets, wicker chairs, lamps, candles, pottery, and even beds.

"It's like a little department store in one room," says Simon, who has been termed a co-owner but insists she's just an investor. OK, it makes sense that she brought us to a place where she has a vested interest, but let's see what else she has up her sleeve.

We pile back in the car as a few passersby gawk in amazement ("Hey, isn't that Carly Simon?"). But everyone is cool and we proceed down Beach Road to a surprise choice, the Art Cliff Diner. It's an inconspicuous spot with cozy red chairs, plates hanging on the wall, and Jesse Colin Young playing on the sound system. "I only LIVE in here!" Simon exclaims, having eaten breakfast here over the weekend.

"This is your basic diner, but they've got the best funky food on the island. I love the blueberry pancakes, banana pancakes, and the almond-encrusted pancakes. It's a popular place and there are lines out the door like Studio 54 on weekends," she adds, laughing.

When pressed, Simon says the finest restaurant on the island is Atria in Edgartown ("very French haute cuisine"), but it's clear her heart is with the Art Cliff Diner. And why not? I'm only sorry that it's too late to sample breakfast.

We head across the street. Although it was 90-plus degrees when I left Boston for the ferry from Woods Hole, it is much cooler on the Vineyard, with fresh breezes everywhere. We're suddenly right by the water at the esteemed Gannon & Benjamin Marine Railway , which books charters on a gorgeous 65-foot schooner called the Juno , and Simon has just been out on one. Years ago, they built a boat for James Taylor named the Sally Mae , after Ben's older sister. (Sally is pregnant with her parents' first grandchild).

"We custom-build wooden boats from small rowing craft to a 65-foot schooner," says Nathaniel Benjamin, a co-owner, who calls himself a "wash ashore" (island slang for someone who came to the Vineyard and stayed). He leads us into a barn, where Simon walks unfazed through sawdust while the noise of drills and soldering irons swirls around her. No divas at this gritty scene.

She tells Benjamin she's taking us around to some of her favorite places. He jokes, "Are there any other places? I thought this was it!" He's clearly an old friend and he takes me aside to say, "Carly was a significant player in getting our lease here in 1978. wanted to buy this property, but people like Carly, James, Mia Farrow, and other concerned citizens led a grass-roots rebellion against it."

We're soon off and Simon is in the car singing along to Bill Withers 's classic ballad, "Ain't No Sunshine." She had earlier done some singing to one of her own songs, which she expects to put on a Brazilian-flavored album she's planning to release next. She recorded the track in her bedroom. She suggests that her newest album, "Into White," (released in March) was for "the baby culture, but this new one will be for the hormonal culture. . . . It will have strong, sexy beats." She doesn't have to say more.

We take a longer drive "up island" toward Menemsha. We stop on State Road at the farmhouse -gallery owned by landscape artist Allen Whiting, notable for his almost psychedelic oil portayals of the ocean and clouds.

"I grew up in this house," says the mild-mannered Whiting. "My father was a farmer and my mother was a writer." Simon praises his work; "I only collect work by artists that I know. " They chat about where some of his newer ones were painted and it's as though they're speaking in tongues about sites such as Seven Gates and Great Rock, perhaps known only to true Vineyarders.

On the way back, Simon mentions some favorite spots we haven't had time to see. She cites two in Menemsha -- The Bite ("a great clam shack") and Menemsha Galley ("terrific for hot fudge sundaes"). There's also the Polly Hill Arboretum in West Tisbury, The Yard in Chilmark ("they put on dance concerts"), Benson's Thimble Farm in West Tisbury ("you can pick your own strawberries there"), Parr Audio in Oak Bluffs ("I recorded my last album there"), and Chicama Vineyards in West Tisbury . She also names other artists whose work is worth pursuing: Barney Zeitz of Vineyard Haven (who made her a stained-glass window featuring the likeness es of her two children) and Margo Datz of Edgartown , a painter who has illustrated Simon's children's books.

We turn down the dirt road to her home and Simon's tour-guide afternoon comes to a close . But we get to take with us her enthusiasm for an island easy to love.

Steve Morse, a freelance writer in Cambridge, can be reached at spmorse@gmail.com.