The state of its cheeses and wines gets finer 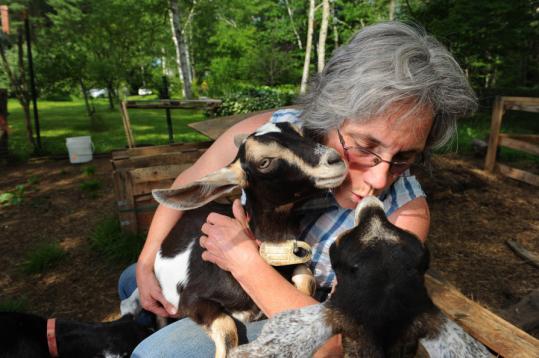 SCARBOROUGH — The moment I taste a wedge of Deb Hahn’s Noble Hill Reserve at the waterfront farmer’s market in Bath, I am smitten. It’s nutty, smooth, caramel-y, with a slight graininess at the finish. Is it something in the local cows’ milk, the salty air, or the maker’s finesse that makes this cheese so outstanding? It’s time to research some local cheeses, with a few stops along the Maine Wine Trail for good measure.

I start at The Cheese Iron in Scarborough, a retail shop where regional and imported cheeses are nurtured in a temperature- and humidity-controlled cheese cave, the only one in the state. “We’re here to maintain the integrity of the farmer,’’ says Vince Maniaci, co-owner with his wife, Jill Dutton. They know by touch, time, or using a cheese iron that takes a plug from the center, when a cheese is ready to cut and sell.

On to Pineland Farms, a 5,000-acre, multi-use campus in rural New Gloucester. At the Market and Welcome Center I pick up a map and head for the creamery, set among pristine pastures and farm buildings. Behind picture windows, in big vats, milk fresh from the farm’s Holsteins is pasteurized, the whey separated, and cheese blocks formed, aged, cut, and wrapped in plastic. The mechanized cheese making is small scale, but Pineland’s products have won several awards.

There are about 35 licensed cheese makers in Maine, a number that has nearly doubled over the last five years. More impressive, says Eric Rector, president of the Maine Cheese Guild, is the success the state’s cheese makers have had in national and international competitions. “There is much more cheese being produced in the state, but it’s also of a very high quality,’’ he says.

Caitlin Owen Hunter is one of the guild’s founders. She bought her first goats in 1979 and licensed her tiny but thriving business, Appleton Creamery, in 1994. Hunter occasionally allows paying guests to visit her small farm in Ap pleton; two friends and I do so. We sit at a picnic table under an awning in her backyard, where bread her husband has baked in their outdoor brick oven accompanies a plate full of a dozen varieties of goat’s, cow’s, and sheep’s milk cheeses, all made on the premises.

We try each in turn, from milder to stronger, as Hunter describes them. This one is a brie-style cheese from sheep’s milk, that one is a chevre she has wrapped in grape leaves soaked in blackberry brandy. As we indulge, Hunter answers our questions about goat biology, milk characteristics, the cottage industry in Maine, and whether she believes cheese takes on the subtle flavor of the local grass and water. (She does.)

After our immersion, we tour the sheds where she crafts her wares, watch the afternoon milking, and nuzzle with a few goats. Now and then Hunter distractedly pats an animal or strokes a just-completed wheel. Cheese is second nature to her, and it’s a pleasure to enter her world for an afternoon.

We each go home with two cheeses of our choice. Hunter puts in a plug for the Maine Cheese Guild’s Open Creamery Day in October, an excellent way to meet the state’s cheese makers and taste their products.

There’s also a surprisingly robust wine scene growing up in the state. The Maine Wine Trail lists 14 winemakers, up from two in 2000, and meeting your local vintner is often as easy as dropping by.

My husband, another couple, and I set out on a tasting tour. Our first stop is Oyster River Winegrowers’ new, salmon-colored shed along Route 1 in Thomaston. Here winemaker Brian Smith, 31, pours and describes three wines. His Villager White, a crisp, German-style wine made from New York grapes, is refreshing and clean. We also try his lean, European-style merlot and a dark, rich petite syrah that has already sold out.

Oyster River is only three years old, and the atmosphere in the new tasting room and farm stand is casual. But the wine is the work of an specialist: Smith has a graduate degree in oenology and vitaculture from California State University, Fresno, and has worked as consultant to other Maine wineries. He has planted three acres of vines and is planning an estate wine next year.

Cellardoor Winery’s Villa, about 15 miles north, is a flashier venue, with two floors of displays and elegant touches. It’s like you’re in a jewel box. Bettina Doulton, the former financial executive who bought the winery in 2007, is rapidly expanding its reach and cachet in the state.

On the second floor Jasie Costigan, tasting room specialist, pours two whites paired with cow’s milk cheeses that Christine O’Meara has brought along from her farm and creamery in New Sweden.

Downstairs, at the sit-down bar, additional servers pour up to six wines for each visitor and discuss the winery’s 19 products. The grapes are sourced from Washington, New York, and California, but this winery, too, plans to produce estate wines soon.

We follow scenic Route 52, along the shore of Megunticook Lake, to Cellardoor’s vineyard and winery, eight miles away. A renovated barn with bar opens to a porch overlooking pond, meadow, vines, and Levenseller Mountain. We settle on stools and taste before strolling the fields.

At Savage Oakes Winery in Union, Elmer Savage and his wife, Holly, keep it simple, growing 3 1/2 acres of grapes on a south-facing hill on their 95-acre farm. This is their fifth year making estate wine, and they sell 90 percent of their 800 cases on site, out of a cheery, pine cabin turned tasting room. After tasting a variety of wines, we walk the farm paths to the meticulously kept vineyard, greeting Lettuce the pig and the Belted Galloway cows as we pass.

We are tempted to uncork a bottle and linger on the hillside.

Nancy Heiser can be reached at nheiser@suscom-maine.net.