Interest became expertise; now the world points to Lovell if you want a best of brew 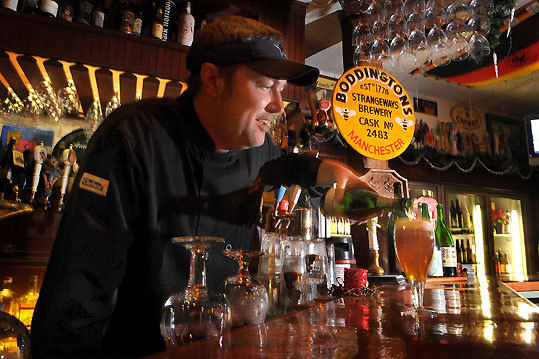 LOVELL - Once you get through the town of Fryeburg, you keep heading north on Route 5, through several miles of dense white pines and ramshackle houses with RVs parked out front, past The Wicked Good Store (breakfast, lunch, take-out pizza, 12-packs of Miller and Coors Light), past the local self-storage facility, past Lovell Hardware and not much else, and there it is - whoops, you passed it - down a dirt road but barely visible from the main drag: Ebenezer’s Restaurant & Pub.

Ebenezer’s is a world-renowned bar, but it looks like any other house in the area. If not for the carved wooden sign hanging from the tree out front, you would think it was just a house. Once you step inside, you can hardly believe you’re deep in the woods of western Maine.

The restaurant seats a few dozen people, and the bar is so tiny it would be crowded with 20. But this is beer heaven. Ebenezer’s has 35 Belgian ales on tap and several hundred varieties in bottles, most of them stored in an astonishing beer cellar.

Belgian glasses - tulips and goblets, each tailored to a specific beer - glisten from racks above the gleaming copper-top bar. Behind the bartender is the huge array of tap handles. Dozens and dozens of bottles sit on shelves in the glass case to the right. The iconic pink elephant that is synonymous with the Delirium Tremens strong pale ale, one of the finest beers in the world, sits on a tap at the front of the bar, there in a class by itself.

People come from all over, even from the West Coast, just to sample the selection here. Devotees have been known to plan vacations around a trip to Ebenezer’s. It is no wonder the place has been named the No. 1 bar, beer restaurant, and beer destination in the world by the likes of Beer Advocate magazine and RateBeer.com. (A sign over the entrance boasts about these superlatives.)

So what is the world’s greatest bar doing in the middle of nowhere? Chris and Jen Lively bought the place precisely because of its location. They were living in Los Angeles - a trained chef, Chris was a food and beverage consultant for a hotel chain - and they decided to get out. They came to Maine, where Jen’s parents lived, to have a go at running a restaurant. In 2001, they stumbled across Ebenezer’s, which was up for sale.

“My wife found this place, this restaurant that had this house attached to it, with 3 acres of land, and it was basically the same price as a two-bedroom house in the ghetto of Los Angeles,’’ said Chris Lively, 36. “We took this over, and we never expected it to become what it did. It had Coors, Bud - it was a redneck bar. . . . We wanted to build a restaurant. That was the dream, the restaurant. We wanted to have a few nice beers, too; we brought in Westmalle, Chimay, whatever we could get our hands on.’’

But Lively’s interest in fine beer was growing, and it didn’t take long for word to spread that a bar with A-class beers had popped up in tiny Lovell (population 974), far, far from any city. Lively got more Belgian beers, rare ones that can be difficult to find in this country.

The Boston area’s finest pubs can’t match Ebenezer’s offerings. The selection is said to exceed even those of Belgium’s best bars. On a recent Saturday night, I tried a De Ranke XX Bitter Belgian IPA, a rare Pannepot Grand Reserva quadrupel, a Gulden Draak dark ale, and a Struise Tsjeeses pale ale, which is nearly impossible to find in the United States. The beers on tap included such unusual ones as Balthazar, a strong ale brewed with coriander, ginger, and cardamom; and Cantillon Rose Grambinus, a sour ale made with raspberries. Unfortunately, on the night I went, Ebenezer’s was out of one beer for which it has become famous: Black Albert, a Belgian royal stout brewed specially for Lively by De Struise Brouwers.

“They have a better beer selection than anyplace I can think of in a 200-mile radius,’’ said Anna McGreavy, 26, of Brownfield, who was seated at one of the eight stools at the bar and drinking a dark Belgian ale. “And it’s a nice, mellow, local scene.’’ The lack of pretense is important to people here. Drinking a Trappist ale or a Coors Light, you are equally welcome.

The food impresses just as much. This is no run-of-the-mill pub grub. There are salads and burgers, sure, but the menu also features appetizers like lobster quesadilla and coconut shrimp in sweet chili sauce and such entrees as mussels cooked in Belgian beer as well as a gourmet version of seafood scampi.

Some months, getting a table in the dining room or a seat at the bar is not much of a problem. The Saturday night in December when I visited, maybe 20 people came through the doors between 6 and 11 p.m. Several stayed by the bar, but others had come for the food - a family with a 3-year-old boy, a pair of elderly couples, another couple in their 20s. Other times of the year, the wait can exceed two hours. At the height of summer and especially in snowmobile season (the pub is on a popular trail), the place is often packed. During the pub’s Belgian beer festival in August, visitors camp out in tents on the adjacent golf course - despite the $250 per person prix fixe menu. (“It’s the greatest beer dinner in the history of mankind,’’ Lively said, laughing, though seeming not to be joking.)

Lively’s timing was fortuitous. Ebenezer’s rise has coincided with an explosion in the craft beer movement in the United States, which has in turn generated a surge of interest in Belgian ales, which are widely regarded as the gold standard. Websites run by beer aficionados point readers to Ebenezer’s. And Lively is building on his success: Last year he opened a second pub, the Lion’s Pride, in Brunswick, which has just as many beers but a more upscale menu. He says he’d like to expand further.

Yet Ebenezer’s doesn’t owe its success exclusively to beer geeks. The pub may be making its name by drawing people from all over the country, but something just as interesting has happened in Lovell itself. The locals were stopping by Ebenezer’s for an American lager and ended up sampling the Belgian ales.

“I was so pigheaded,’’ said Joe Davis, who lives in town and says he comes to Ebenezer’s every weekend. He drank Budweiser for two years here before Lively could persuade him to try a Belgian brew. Now that’s all he wants. “It took a long time, but it’s better quality - all these different flavors and everything.’’

Stephen Glasgow, who lives nearby, said he drinks at Ebenezer’s every weekend. He’s here so much that he and Lively have become good friends. But he, like the others, is only a recent convert to Belgian ales. He was drinking Guinness stout and American microbrews before Lively came to town.

“I don’t like beer, I love beer,’’ Glasgow said. “Where else can you find beer like this? Find me one bar.’’