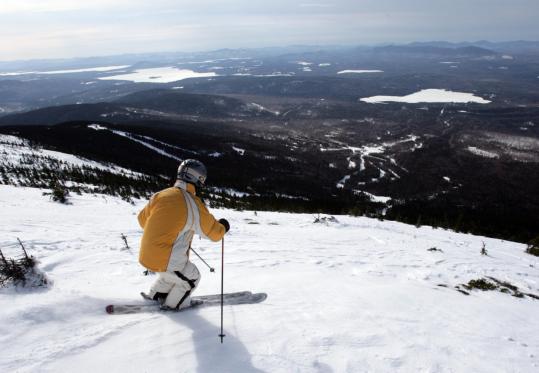 Before the new millennium, Saddleback was Maine’s rising star, poised to become the “Vail of the East.’’ Its grandiose expansion plans challenged top-dog Sugarloaf for future bragging rights. Environmental and Appalachian Trail advocacy groups had other ideas, though. They sued to preserve the peak’s views and quietude and to shield future hikers from signs of development and commercialization. For roughly 20 years, Saddleback languished. Into the early 21st century, it remained firmly entrenched in the 1980s.

Nearby Sugarloaf, on the other hand, kept growing. Under successive ownerships, it added high-speed lifts and built ski-in/ski-out condos. It turned its narrow, curvaceous trails into wide-bodied, multi-laned superhighways. Fans call the mountain “the Loaf.’’

Sugarloaf delivers what skiers paying more than $70 for a day ticket have come to expect: slopeside condos and hotels, a base village, health clubs (including the Anti-Gravity Complex, a gym with climbing wall, trampolines, and an indoor skate park), and high-speed chairs.

Not that the Loaf is pretentious. At its core, it is pure Maine, and its cult-like status among Mainers affirms that. Nearly 60 percent of its passholders hail from the state. Sugarloaf’s compact, somewhat funky, base village is more humble than flashy. There are just enough dining, lodging, and drinking options to keep most folks happy. “You see villages all over the place at Western resorts, but to see one, all ski-in-ski-out in the East is unique,’’ says John Diller, general manager.

The only thing brash about Sugarloaf is the skiing. It delivers one of the best experiences in the East, topped off with the only above-treeline terrain. “Just look at it from ‘Oh my gosh’ corner,’’ Diller says, referring to the point on Route 27 where it looms into view. “It’s the only ski area in the East where you can see the whole thing. Top to bottom, it’s the longest continual vertical in the East, and it’s all on one mountain.’’

Indeed, few resorts can compare to Sugarloaf for size, range, and variety. Anyone who has mastered linking tours can journey to the 4,237-foot summit for views extending from Mounts Washington to Katahdin, then descend the mountain’s 2,820-foot vertical.

It doesn’t take more than a few runs to realize why Olympians, including Seth Wescott, Bode Miller, and Kirsten Clark, trained at Carrabassett Valley Academy. Old-timers like to say that the path to Olympic gold goes down the Narrow Gauge, the only trail in the East sanctioned for all four World Cup disciplines. New School tricksters also give a nod to Skidder, a muscle-bound training trail where the current crop of Olympic wannabes perfect their impressive moves; the massive Pipe Dreams superpipe; and Sidewinder, the snowboard-skier cross course designed with input from gold medalist Wescott.

Sugarloaf’s lift system, anchored by two high-speed quads, is augmented by well-placed, if aging, doubles, triples, and quads, and a lone T-bar. That means a lot of people on the mountain every day. When the powder is trashed, which is pretty much a given within the first hours of opening on a weekend powder day, savvy locals head to Saddleback. They know that there will be unblemished lines in the glades, sometimes for days. Saddleback’s slower chairs and T-bar just don’t ferry as many people as the Loaf’s.

Saddleback attracts skiers with terrain, but it seduces them with views and price. Its 4,210-foot summit puts teeth into the term “jaw-dropping.’’ On a clear day, the views extend over the Rangeley chain of lakes to the Presidential Range of the White Mountains. A weekend ticket to the 2,000-foot-vertical playground is $49 adult; midweek deals lower that to $35.

“Saddleback has a very different feel from Sugarloaf,’’ says Warren Cook, Saddleback’s chief executive and general manager. With 95 percent of its skiers hailing from the state, Saddleback is even more Maine than Sugarloaf.

“It’s not as developed, so crowds are smaller. It’s not as expansive, but it’s every bit as challenging,’’ Cook says. One of the biggest differences, he adds, is the tree skiing, with tight glades and natural woods. Another is that, with few exceptions, Saddleback’s years of near dormancy preserved its classic narrow and winding trails.

Snowmaking, skier demand, and capacity drove the widening at Sugarloaf, but those aren’t key factors at Saddleback. Snowmaking technology has evolved, and owner Bill Berry wants to preserve the classic Saddleback experience.

“The Berry family’s vision is to be the alternative, not the high-speed place,’’ Cook says.

Since Berry purchased Saddleback in 2003, he’s been cautious in developing it. He makes no apologies for the old double chairs and T-bars; he has said there will be no high-speed quads on his watch.

But Cook is wise enough to keep updating, investing heavily in snowmaking and grooming. There are new glades and trails, including a new beginner area with its own fixed quad and gentle trails that make even wobbly-kneed first-timers feel like champs. The enlarged and modernized base lodge now has a huge stone fireplace, ideal for warming chilled bones and drying wet mittens, and a java joint, allowing those who ski the intermediate trails on the mountain’s core to sip a latte while riding the pokey Rangeley double chair. Last season, the summit T was replaced by a quad, a gift to experts who frequent the steep trails and glades.

Operations manager Jim Quimby is excited about the new Casablanca Glade being cut on the upper mountain between Muleskinner and Black Beauty. “It eventually will be about 60 acres,’’ he says, and it will include some “natural tree islands, uncut woods within the glade.’’ And before heading up the summit quad for another run, skiers can rest and refuel with soups, sandwiches, and drinks at a yurt, equipped with heat, power, and composting toilets. “Now people will be able to stay up on the upper mountain all day if they want to,’’ Quimby says.

Yet, for all these improvements, Saddleback has no flash and little splash, except during the end-of-season pond-skimming contest. Fashion is more about function than appearance; think Labonville and Columbia, not North Face and Spyder. And it’s not rare to spy a pair of Rossi Strato 210s or Olin Mark IVs in the rack outside the lodge. When lifts close, there might be a few diehards tossing back beers in the Swig ‘n’ Smelt Pub, the lodge’s upstairs lounge-restaurant, but there’s no village, just the lodge and a handful of condos.

Hilary Nangle can be reached at www.HilaryNangle.com.