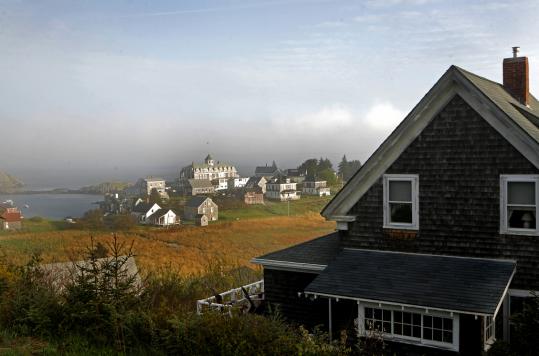 A view of the village on the harbor side of Monhegan Island; biking is big on Peaks Island.. (Michele Mcdonald/Globe Staff/File (Above); Hilary Nangle/For The Boston Globe)
By Hilary Nangle Globe Correspondent / September 27, 2009

The first cool breezes that signal autumn are a wake-up call to steal away one last time to one of the more than 2,000 islands salting Maine’s coastline. Some are ledges that barely break the water’s surface at high tide. Others are connected to the mainland by bridges and causeways. Of those accessible by ferry, only a handful have enough to keep a visitor happily occupied for more than a day trip and the support services to allow that. Those are the ones I favor. And autumn, when the summer crowds have departed, lodging rates are lower, and migrating birds are abundant, is an ideal time to go.

Peaks Island
Life moves at a slower pace on Peaks. The island, a mere 20-minute ferry ride from Portland, is one of the city’s favored playgrounds. In summer, throngs of day-trippers join the residents and those who summer here. In fall, I practically have the island to myself.

Peaks’s proximity to Portland has meant it has long been populated, often almost overly so. In the late 1800s, it was the dubbed “the Coney Island of Maine,’’ for its 16 lodgings, three summer theaters, dance hall, and amusement park. Another wave came during World War II, when upward of 800 soldiers were stationed here to defend Portland Harbor. Now about 1,000 people call it home, and about as wild as Peaks gets are the summer Sunday afternoon reggae concerts at Jones Landing.

No matter what the season, once the rush off the ferry dissipates, there’s really no reason to hurry anywhere. There isn’t a whole lot to do here, but that’s the point. While I could circumnavigate it on a bike or on foot in a leisurely couple of hours, spending a full day or longer provides time to meander island preserves, savor the backshore views, or find the perfect shorefront rock.

Peaks’s plusses include a handful of galleries and shops, a grocery, and three museums with unusual collections. Downtown is the Umbrella Cover Museum, which is, according to founder Nancy 3. Hoffman, “dedicated to the appreciation of the mundane in everyday life.’’ Inside are more than 600 covers from 37 countries and Hoffman often serenades visitors with “Let a Smile Be Your Umbrella,’’ accompanied by accordion.

About a 10-minute stroll from the ferry dock are two drafty shorefront Victorian cottages that double as museums. Members of the Fifth Regiment Maine Volunteer Infantry built the Fifth Maine Regiment Memorial Hall in 1888 also as a reunion hall. Today it’s filled with island memorabilia and Civil War artifacts. Members of the Eighth Maine constructed their cottage a few doors down in 1891 with a gift from a Civil War veteran who had won the Louisiana lottery. It’s now a living history museum as well as a lodge, where guests rusticate in much the same manner as the vets who built it.

I prefer the far comfier digs at the Peaks Island Inn, where I can quaff a Shipyard ale, brewed on the premises, while watching the sun drop in a blaze of glory behind the Portland skyline.

Monhegan Island
This small island off the mid-Maine coast seduces visitors with its rugged build, handsome looks, and a Yankee character that seems to hold you at arm’s length while at the same time enveloping you. There’s a natural rhythm to life here, an ancient one ruled by sun and tide and influenced by wind and storm. I’ve visited when the winds have blown hard, hiked in the misty rain, and attained enlightenment in the fog, but nothing compares to a crisp autumn day.

Monhegan has been attracting artists, drifters, and dreamers since the early 1600s. Year round, it’s home to about 75 hearty souls who mostly make their living off the sea, but in summer the population ebbs and flows with the daily boats that ferry passengers from Boothbay Harbor, New Harbor, and Port Clyde. People come to visit the dozens of artist studios sprinkled through the village, to hike the rugged trails, to admire master works in the museum, or simply to relax, read, and rejuvenate.

Walk around, and it’s easy to see how Monhegan earned the nickname “The Artists’ Island.’’ Everywhere is a scene waiting to be painted, and often an artist painting it. Indeed, for fans of late 19th- and early 20th-century American art, a visit to Monhegan conjures a sense of déjà vu. The hilltop lighthouse, soaring headlands, cupola-topped inn, lobster trap-line lanes, jaunty fishhouses, boat-filled harbor, and jumble of village houses have been captured on canvas by generations of artists.

The lighthouse keeper’s house now doubles as The Monhegan Historical and Cultural Museum, and the adjacent assistant keeper’s house is home to a gallery, with annual exhibits highlighting Monhegan art. The museum shows only the work of deceased artists, which explains the absence of Jamie Wyeth’s paintings. “We have a small community, and it’s too interpersonally difficult to make decisions of which living artists to show,’’ says Ed Deci, director and president.

Monhegan also lures hikers and birders. Although only 1.7 miles long and barely a half-mile wide, the island is laced with 17 numbered and mapped trails providing about 14 miles of hiking. Trails edge the cliffs, pass over hills, mosey across fields, and cut through Cathedral Woods. It’s easy to lose the crowds and find a place, a rock, ledge, or clifftop perch.

Adding to Monhegan’s allure is the absence of cars. A fleet of aging trucks owned by lobstermen and those who ferry luggage for visitors bump along the section of village road, but that’s it.

On a starry night, if I step off the Island Inn’s wraparound porch and gaze up at the canopy, it seems as if I’m looking straight into heaven. Then I realize, I’m already there.

Vinalhaven
This is the largest of Maine’s offshore islands and home to what islanders claim is the most productive lobster-fishing fleet in the world. Working boats crowd Carvers Harbor, and shoreline wharves are piled with traps, crates, and buckets of bait.

Whenever I come here for a day, I kick myself for not booking a room. One day just isn’t enough. Swept along by the bustle of working islanders, I forget that I came to chill, not sweat. And I never have enough time to hit just the intown highlights, never mind the parks and preserves that necessitate a bicycle.

But first things first: breakfast at the Surfside, a local grub-and-gossip place atop Harbor Wharf. If luck’s with me, fish cakes will be available. “Always on Sunday,’’ the waitress advised once when disappointment etched my face.

After breakfast, I like to mosey along admiring the Victorian-era architecture, including the former Odd Fellows Hall, where artist Robert Indiana has added his colorful touches, to browse the main street shops, and visit the Historical Society Museum. In the 19th century, Vinalhaven carved its future in granite. During its heyday, when its stone was in high demand for commercial buildings, government edifices, and cathedrals, European stonecutters and quarry workers helped swell its population to nearly 3,000.

Less than a 15-minute stroll from downtown, but seemingly a world away, is Lane’s Island Preserve. Trails follow the shoreline and cut across meadows. Rugosa roses thrive here. In summer their scent is almost intoxicating; in autumn, their vibrant hips color the landscape.

Biking is an ideal way to explore the rest of the island. Most folks loop around, perhaps stopping at one of the two swimming quarries or Geary’s Beach. Phil Crossman, who runs the Tidewater Motel and functions as a one-man information service, says a better choice for those who want a short pedal with big scenery is to head out the Old Harbor Road toward The Basin, an unusual, nearly-landlocked pond of saltwater studded with rocky ledges. “It’s a seal nursery,’’ he says, adding that it’s also a great place to paddle a kayak, which by the way, he rents, along with bikes, and even a car.

If you truly want to see wildlife or birds, Crossman adds, book a trip with island birding and wildlife specialist John Drury. “I had some folks come back the other day who saw whales and an albatross,’’ he says. Now that’s an island adventure.

Hilary Nangle, author of “Moon Coastal Maine,’’ can be reached at www.hilarynangle.com.