Going green is their Maine thing, though the guests might not notice 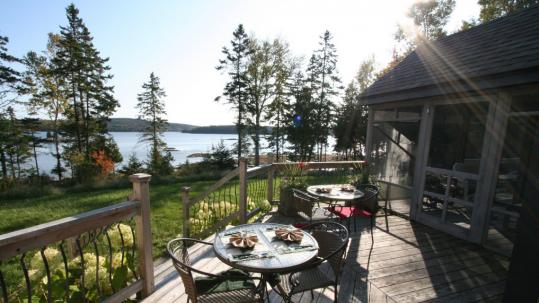 The oceanfront Three Pines B&B and organic farm in Hancock is completely off the grid. (Tom Thel for The Boston Globe/File)
By Hilary Nangle Globe Correspondent / September 27, 2009

Green is the latest buzzword and accommodations nationwide are rushing to cash in. That has resulted in “green washing,’’ or creating the illusion of environmental virtue without the substance. Check into one of these Maine properties to sample the real thing.

Maple Hill Farm B&B Inn and Conference Center, Hallowell This renovated 1906 farmhouse, set on 130 acres laced with trails and next to an 800-acre wildlife preserve, was green long before it became a household word.

Co-owner Scott Cowger served in the Maine Legislature and chaired the Natural Resources Committees of both its House and Senate. “It’s important to me that we leave this world a better place,’’ he says. “I put my money where my mouth is. We’ve made major investments in going green.’’

The inn, Maine’s first certified Environmental Leader green lodging, produces its own energy using 202 evacuated tube collectors, 126 photovoltaic panels, and a wind turbine. It has a combined solar hot water and electric system that generates enough power to reduce CO2 emission by more than 40,000 pounds annually. “Some days we get all of our power from solar and wind, but typically, it’s about 50 percent overall. We do get most of our domestic hot water from solar,’’ Cowger says.

Now he is tackling lighting. “We have a lot of fixtures where we can’t use compact fluorescents. We want to switch to LED, but it’s a major expense. The LED

bulbs cost $50 each, but they’re very efficient and last a long time. I’m trying to convince the state to offer rebate programs.’’

Cowger sees a more enlightened consumer these days, one who inquires about green policies. “Hanging up and reusing a towel is no longer enough,’’ he says. 800-622-2708; www.maplebb.com; rates $100-$205, including breakfast.

Inn by the Sea, Cape Elizabeth “We started down a green path eight years ago by ripping out all the exotic plants and replacing them with indigenous ones that require less water and chemicals,’’ says spokesperson Rauni Kew. “The next thing we did was change out 850 incandescent light bulbs for compact fluorescents, LED, and solar lights, and then we were on our way.’’

The beachfront inn, which says it is the first in Maine to heat with biofuel and the first in New England to have dual-flush toilets, also has solar panels, and when it added a spa last year during a multimillion-dollar renovation, the green initiatives continued. During treatments, “guests are wrapped in bamboo towels, and we use natural products,’’ Kew says.

Five acres are dedicated to a wildlife habitat, including a certified butterfly way station. “We created fun and whimsical programs for kids and adults, such as how to plant for wildlife for adults, and bug’s-life summer programs for kids, in which they dress like bugs and learn about ecosystems from a bug’s viewpoint.’’ 800-888-4287; www.innbythesea.com; $189-$819.

DragonFlye Inn, Brooklin Joe Moore guarantees guests that, “to the greatest practical extent, every product that is not actively reused at DragonFlye Inn will be either organically grown, manufactured with sustainable practices, or some combination of both.’’

That has resulted in some innovative ideas. He originally planned to replace the slate roof with a faux slate one made from recycled automotive tires, but the cost was nearly quadruple an asphalt roof. “That really was a disappointment,’’ Moore says. “It would have been not only good for the environment, but also aesthetically more pleasing. But to do so, we would have had to forgo other projects for economic necessity.’’

Moore has proceeded with other green initiatives. Last year, he insulated the 1874 Victorian using shredded blue jeans. “You can blow it into walls and attic space just like you would a normal blow-in insulation.’’

Now he’s constructing a solar energy system. And he has turned his green efforts into a neighborhood project. He collects plastic grocery bags from neighbors to use as trash-bin liners in guest rooms. “We’ve also built a recycling station in our parking lot for glass, plastic, and aluminum for all our neighbors. We give the glass bottles to the school for its fund-raising.’’ 207-359-8080; www.dragonflyeinn.com; $145-$175, including organic continental breakfast and use of bicycles.

Oceanside Meadows, Prospect Harbor The property, which comprises two 19th-century farmhouses operating as bed-and-breakfasts on 200 mostly undeveloped acres on the Schoodic Peninsula, stretches from a saltwater marsh, through forests and meadows, by a brackish pond, to a rare sand beach framed by grassy dunes and craggy ledges. It’s a spectacular piece of real estate that owners Ben Walter and Sonja Sundaram aim to preserve.

Their grand plan is to preserve the land in as natural a state as possible and provide access unimpeded by development. “We want people to commune with nature,’’ Sundaram says. They’ve cut trails and created detailed guides illustrating the property’s habitats and ecosystems. All guests receive laminated copies of these to use during their stay. As one noted: “These guides are amazing; the info is real science, not pandering.’’

The inn’s renovated, 125-seat barn is home to The Innstitute for Arts and Sciences. Programs have included lectures by astronomer Alan Hale (co-discoverer of the comet Hale-Bopp) and ornithologist David Wingate, astronomy programs, and concerts ranging from Opera Maine to Paul Sullivan.

Sundaram maintains organic gardens, which she forages each morning for herbs and edible flowers to use in elaborate breakfasts hearty enough to fuel guests for a day of environmental explorations. 207-963-5557; www.oceaninn.com; $119-$209, including full breakfast.

Three Pines Bed & Breakfast, Hancock This oceanfront organic farm and bed-and-breakfast is completely off the power grid. The 40-acre property on the east side of Hancock Point fronts on Sullivan Harbor, just below the Reversing Falls. Owners Ed and Karen Curtis have completed a conservation easement through the Frenchman Bay Conservancy to protect it from development.

“My husband had taken an interest in solar in the late 1970s, and when we were ready to make a change from our engineer lives, he wanted to put that interest into practice,’’ Karen says.

Ed did all the planning to make the house as energy efficient as possible. The design is passive solar; photovoltaics provide electricity; appliances are primarily propane-powered; satellite technology operates the TV and Internet systems; a masonry heater provides warmth in winter.

For the Curtises, it’s not just about being green, but also about sustainable living. They raise rare breed sheep for wool and chickens for eggs; grow organic vegetables, berries, and grapes; maintain a 40-tree orchard; and recently began keeping bees. They also make cheese, yogurt, soap, cider, jams and jellies, and maple syrup.

“We get people drawn to various aspects of our project here,’’ Karen says. “Some have no idea we’re off the grid, they’re coming strictly for location. Some are very interested in the farming aspects. Some come because we’re vegetarians. Some people never even know we’re off the grid, if the subject doesn’t come up. Unless they happen to ask, it’s completely transparent.’’ 207-460-7595; www.threepinesbandb.com; $85-$125, including full vegetarian breakfast.

Maine Huts and Trails, Carrabassett Valley This system is the ultimate in green. Getting to the full-service, bordering-on-hiker-luxury huts, requires hiking or mountain biking in summer, cross-country skiing or snowshoeing in winter.

Two huts, one at Poplar Stream Falls and the other on the shores of Flagstaff Lake, have been completed. Fund-raising is underway for the third, which will be sited on the north shore of the Dead River, about a mile below Grand Falls. Although off the power grid, they have electricity and heat, and the restrooms have hot showers, motion-sensor-operated lighting, and composting toilets.

Power is produced by means of hydro, a wood boiler, solar panels, and a woodstove. It’s a sophisticated system backed up by a propane generator. At times during the year, the Poplar Falls hut actually produces as much as 55 percent more power than it can use, says Alex Frankel, a seasonal worker. “We have to dump it, because there’s no way of storing it.’’ 207-265-2400; www.mainehuts.org; $65-$93 adult, $32-$50 children ages 3-12, for shared accommodations; private dorms sleeping two to four are available; rates include bunk with mattress and pillow, breakfast and dinner.