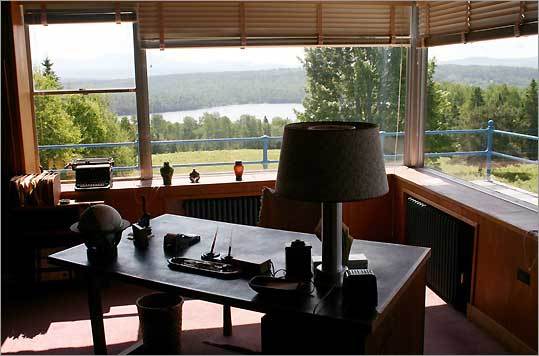 RANGELEY, Maine - Viewed from the roof of the Wilhelm Reich Museum, the Rangeley Lakes melt into the sky along an infinite horizon. A blueberry field slopes downhill from this modern stone building with its multilevel rooftop terraces.

The puffy clouds and long views, the aroma of pine needles baking in the sun, and the pervasive quiet make it hard to believe that these 175 acres known as Orgonon were the scene of a little-known act of censorship by an unlikely branch of the government. On June 26, 1956, Food and Drug Administration agents arrived here to burn several boxes of the published research literature of Wilhelm Reich, the Austrian-born research physician and scientist who owned the property. (A month later, in New York, FDA agents would supervise the burning of several tons of Reich’s publications - including hardcover books - from his private press.)

The events leading up to this smack of science fiction, partly because of the backdrop of the conformist, paranoid 1950s, when some federal agencies seemed bent on achieving George Orwell’s dystopian future, and partly because Reich coined names for his discoveries and inventions that could well have cropped up in a Vonnegut novel.

But, as visitors to this singular museum learn, it all really happened. Starting in 1947, the FDA believed that Reich, who had trained as a psychoanalyst under Sigmund Freud, was a charlatan, falsely promoting his ideas and his experimental scientific and medical invention, the “orgone energy accumulator,’’ to improve sex and health.

Seven years later, the FDA persuaded a federal court in Maine to issue a Complaint for Injunction against Reich, forbidding the interstate shipment of orgone accumulators. The complaint also banned all of Reich’s books and other publications that mentioned orgone energy, the term he had coined for the fundamental biological force that was the subject of his medical and scientific work.

In May 1956, Reich was convicted of contempt of court for violating the injunction and sentenced to two years in prison. That summer, in addition to burning Reich’s publications, FDA agents supervised the destruction of orgone accumulators at his Rangeley property. Reich died in 1957, eight months into his sentence at the federal penitentiary in Lewisburg, Pa. He was 60.

“To put it mildly, these actions had a chilling effect on other physicians and scientists continuing Reich’s research,’’ says Kevin Hinchey, associate director of the Wilhelm Reich Museum, which is housed at the Orgone Energy Observatory at Orgonon (pronounced OR-ga-non). “The fact is, most of Reich’s medical and scientific work has been replicated for decades. But the number of physicians and scientists is small, and the traditional medical and scientific communities are either dismissive of Reich’s work without ever having studied it, or ignorant of it altogether. Which is ironic, since Reich’s archives are located at the Countway Library of Medicine at Harvard University.’’

Reich’s struggles with authorities began long before he emigrated to the United States in 1939 and pitted him against foes more formidable than the FDA: the Nazi Party, the Communist Party, and the International Psychoanalytic Association. And after he got to this country, the FBI and the Immigration and Naturalization Service weren’t too thrilled with him either.

The reason for such equal-opportunity enmity? A good deal of Reich’s work and activities revolved around sex, “including practical and political efforts in Europe to adapt cultural institutions to fulfill people’s emotional and sexual needs,’’ says Hinchey. But to leave it at that oversimplifies his medical and scientific work, which has been widely misunderstood and distorted, he adds. “Just Google ‘orgone’ and ‘Wilhelm Reich’ and you find all kinds of really crazy stuff, most of it untrue. Over 7,000 pages of Reich’s writings are publicly available, so there’s no excuse for not reading primary resources to get accurate information,’’ says Hinchey, whose job includes trying to keep the facts straight.

The museum attempts to do just that. Visitors begin by watching a half-hour biographical film. Among many other things, it answers the question, “Why here?’’ Reich first visited the region on a camping trip in 1940, and he felt that the low humidity and clean air would facilitate his experiments. In 1942 he bought this former farm property, eventually building a student laboratory (the museum office and conference center), two residential cottages (rented out year-round), and the observatory (home of the present museum).

The film also explains the nature of Reich’s research and dispels the myths about it. While studying under Freud and seeing his own patients, Reich began recognizing the tangible effects of a healthy, satisfactory sexual life on a person’s emotional and physical well-being. Consequently, he came to believe that Freud’s concept of “libido’’ was a real biological energy - not just a psychological idea - that might someday be measured. Reich’s clinical work with his psychoanalytic patients, followed by years of laboratory experiments involving the microscopic study of living matter - including protozoa, blood, and cancer cells - led to his discovery of this biological energy (orgone) in microscopic cultures.

Reich later discovered orgone energy in the atmosphere, leading him to conclude that orgone permeated all substances and all parts of the environment. In 1952 he invented an instrument called the cloudbuster (a cluster of hollow metal tubes aimed skyward and connected by cables to water) - that he used to change weather patterns by altering concentrations of atmospheric orgone. Reich also harnessed orgone energy to power a small motor in his lab, and he and other physicians used the orgone accumulators for the experimental treatment of cancer patients. According to a printed affidavit in Reich’s 1948 book “The Cancer Biopathy,’’ Reich never promised a cure or charged fees to terminally ill cancer patients who volunteered to sit in these devices: sauna-sized cabinets made of alternating layers of metal and organic material.

After the film, visitors tour Reich’s former lab, where his scientific and medical equipment, displayed with explanatory plaques, illuminates his experiments. His comfortable former study occupies the light-filled upper floors of the building, with furniture and personal possessions remaining much as Reich left them. Science aside, the highest rooftop deck yields one of the best views to be had without scaling a mountain.