As far east as the country stretches, the people and their pursuits all point outward here 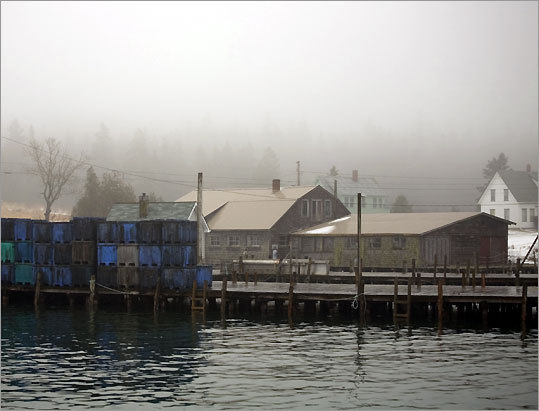 MACHIAS, Maine - Room No. 6 at the Machias Motor Inn looks out onto the mighty frozen Machias River. Across the way lumpy, spruce-covered bluffs float in the fog. Ravens and gulls hop around in puddles.

Open the sliding glass doors and listen to the squeak and rumble of the restless ice. Listen to the dripping water and the sea urchin divers in the room next door. They are done with their cold day of work and are drinking beer and complaining about the low price per pound. They're charming, but be careful, they'll try to steal your girl.

Walk out of the room and across the parking lot to Helen's Restaurant. It's been in the same family since the 1950s. Order meat loaf with gravy and onion rings, a bowl of crabmeat chowder, macaroni and cheese, cornbread, broiled haddock, coleslaw. Be satisfied that the food is bland, but bland in a way that is confident and wonderfully austere.

The eastern part of Washington County, the easternmost county in Maine, feels a long way from the rest of the world. Unlike much of the Maine coast it's a place where people live and work year-round. They do whatever there is to do: rake blueberries in the summer, cut balsam for wreaths in the winter, dig clams, bag groceries, filet fish.

For visitors, most of the coast blooms with the lupines and dies with the goldenrod. The leaves drop, and everybody goes back where they came from. Sailboats are hauled out of harbors, cottages shuttered, ice cream stands and clam shacks locked up. But Washington County slogs on, beautiful and quiet and bleak, no matter the season.

The next morning wake up with the sun and drive down the dead-end spine of a road, through the fog and rain to Machiasport, a speck of a fishing village at the mouth of Machias Bay. The tide is out. Clamdiggers - lobstermen who would be drag ging for scallops if the season hadn't been shut down by the state - are making their way across the frozen mudflats.

They walk in the sandy channel dragging wooden dog sleds. They pack lower lips of tobacco, bend, and turn over the mud. The clams are softshell steamers and when they are exposed they squirt water-pistol streams of seawater, and then the men pluck them from the mud and toss them into the tumbler. The wind blows. The tide comes in. "There's no place we'd rather live," they say. "No better place."

Jasper Beach is across from the Downeast Correctional Facility, an aging minimum-medium security prison housing primarily sex offenders. The beach parking lot is barely plowed. Put the truck in four-wheel drive and head toward the shore. Waves crash. The beach is all smooth stones that rattle with the surf. Driftwood and seagull skulls pile up along the high tide line. Each smooth stone is a treasure.

Halfway back to town is the Bucks Harbor Shopping Mall. It is right on the road and looks like not much more than a shed. Trucks park this way and that outside. Go in even though it feels like a private club.

Inside the place is warm and ship-shape. The kitchen is just like a home kitchen and everything is cooked as it would be at home. There is a rack of mugs on the wall. Each one is different and each fisherman has a mug that he prefers to use. There are also sodas, and candy, and an alcove of serious marine supplies: bilge pumps, urchin measures, as many kinds of rubber gloves as Eskimos have words for snow.

Lana Webb runs the store. She's a dental hygienist from Bangor. She likes cooking for fishermen. "There's not much I'd get up at 3:30 in the morning to do - but these guys are worth it," she says.

This morning Claire Day is tending the stove. She's a grandmotherly fisherman's wife. "We officially open at 5 but the guys know that we're here at 4 so that's when they come," she says.

The fishermen walk in and they ask Day how it's going and she answers, "Straight ahead."

Day makes a perfect egg, bacon, and American cheese sandwich on a grilled English muffin. Eat it with hot sauce and ketchup. Drink coffee and listen to the fishing talk.

Back up to Machias and over the falls of the Machias River. ("Machias" means bad little falls.) You can see the water flowing brown through a gorge by the old grange hall.

On the way out of town David Kenney sells Maine shrimp, and scallops too when they're in season. He fishes for lobster in the summer. The shrimp are good enough to eat raw.

The road to Lubec is sad and desolate. Drive through east Machias and Cutler. Logging trucks piled high with moss-covered maple rumble by. The road is long and straight, dense dark spruce on either side. There are tidal rivers, sawed-off trailers, the occasional crumbling farmstead. If you didn't know, you might think it was the north woods. If you turned off the highway and dipped and dived down any of the long dirt driveways, you would see the bold coast, the wild shore, a straight shot to Ireland.

Cross into Lubec and the Atlantic time zone, even though it's really still Eastern time. But the cellphone thinks it is Atlantic time, like in Newfoundland and Manaus, Brazil. And it should be one hour later. The sun sets so early.

At Quik-Shop a free cup of coffee comes with gas. In the ice and snow Lubec looks like an Inuit outpost on the high tundra. But not for long. In the spring it will blossom.

Uncle Kippy's, a first-class seafood place with a bar to boot, looks like a Chinatown dim sum hall, with big round tables and old vinyl swivel chairs and a soap opera on the TV. The haddock chowder is perfect and elegant with so much fresh fish. The onion rings are hand cut, hand dipped, and golden brown.

Look around town. There's a road called Horror Hill Road, a few old cannery and smokehouse buildings. There used to be as many as 20 canneries in Lubec. Now there are none. Dust blows through the streets.

On a steep and narrow street overlooking the harbor there is a little house with a sign that says Sun Porch Industries and something about a bakery. Go in and meet Martha St. Onge. She wears layers of wool and runs the bakery and tiny market from her front porch. She is up early in the morning to bake dense loaves of sourdough bread with hand ground grains.

Ramble out of town on the South Lubec road to the lighthouse and state park at Quoddy Head, the easternmost point of land in the country. Nobody is there. The icy parking lot and trails are Zamboni smooth. Slip down them anyway to look out at the ironbound cliffs of Grand Manan. Good stone picking here, too, each one smooth and strangely colored like painted pieces of cold wood.

Annabell's Pub is the easternmost tavern in the United States. It's a worn-out and lived-in place full of wind chimes and lobster buoys and all kinds of colorful kitsch. There are lots of plants in the big sunny windows, local beers on tap. Belgian bottles are in the fridge, and there is a pool table and a porch where you can smoke and look out at the ocean. On Sunday afternoons musicians come over the bridge from Campobello Island, New Brunswick. Annabell sets out a folding table for potluck food - chili and chips - and everyone has a good time.

Life without the hype.

Jonathan Levitt can be reached at jonathanlevitt.com.