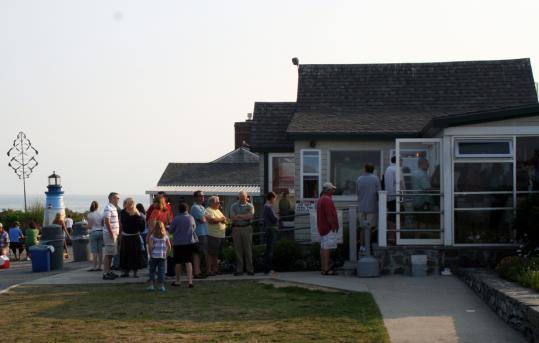 The Lobster Shack at Two Lights on Cape Elizabeth, Maine, is a beacon to patrons hungry for lobster rolls and the same view American master Winslow Homer might have had of Casco Bay. (Photos by Lisa Levitt/for the boston globe)
By Stephen Jermanok Globe Correspondent / September 14, 2008
Text size – +

CAPE ELIZABETH, Maine - Who has the best lobster rolls in Maine? If you ask around, you'll ignite a territorial catfight, with everyone arguing for their local favorite.

But if you inquire of those same partisans where to find the best lobster roll with a view, the majority of Mainers probably will point you to the Lobster Shack at Two Lights on Cape Elizabeth.

Not far from where Winslow Homer set up shop on Prouts Neck, this lobster-in-the-rough landmark overlooks that same boulder-strewn coastline Homer loved to paint. Order your food at the window of the rustic shack, wait for your number to be called, and grab a picnic table that rewards you with vistas of the Atlantic as it pours into Casco Bay, framed by two lighthouses.

There has been a lobster joint on this salty spit of land since the 1920s, but it wasn't until 1969 that the Lobster Shack made its debut. Three generations of the same family have been running the show ever since, the latest being Katie and Jeff Porch. Every day in summer they make the 20-minute drive to the pier in Portland and purchase some 200 of the noble crustaceans. The shrimp, crabs and clams are also bought close by, ensuring their freshness and helping to sustain the local economy.

"We're a small business, and we want to support other ones too," says Katie. Theirs is indeed a small business, but a thriving one, which often serves some 1,500 people a day in high season. This time of year - until the Shack closes Oct. 21 - locals and Portlanders flock, usually with a cooler in hand, to linger over a beer or glass of wine with their seafood. This is soft-shell lobster season, so prices are lower, with lobster dinners (complete with chowder, cole slaw, and biscuits) going for $20.99 and lobster rolls $14.99. Katie says there is as much lobster in the rolls as in the dinner.

Lobster stew is a favorite in early autumn, especially if the mist is rolling in and the foghorns are sounding. Also popular are the fried scallop and shrimp plates.

A lot has changed since Jeff's grandfather, Jim Leadbetter, opened the restaurant. The volume has increased significantly; they no longer use trans fats in their frying oil; and they offer garden salads. Fresh-baked desserts, however, have always been a priority. Leadbetter was a baker by trade, so those biscuits you get with dinner are made every morning along with mini-blueberry, strawberry-rhubarb, and chocolatey whoopie pies.

"The only thing that changes around here are the seasons and that's the way we like it," says Katie, adding that fall is her personal favorite. "The familiar faces return at their usual hour, say every Thursday at 5 p.m., and we know exactly what they like."

Doubtless it's a tasty red crustacean, in or out of its shell.

Stephen Jermanok can be reached at farandaway@comcast.net.