There's a little bit of Italy in Portland 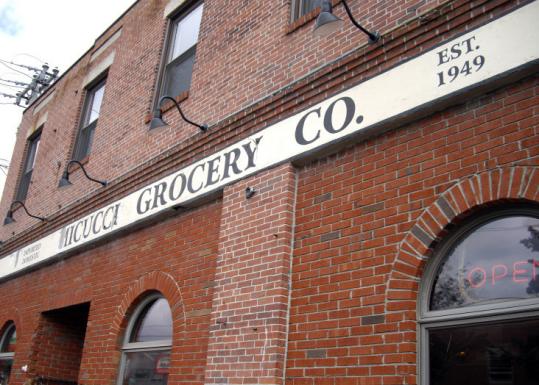 PORTLAND, Maine - On one side of India Street sits Jordan's meats, closed for business years ago; grass is growing so high behind the locked gate that it covers the entrance. On the other, a worn sign reigns over a sturdy brick facade: Micucci Grocery Co., Est. 1949. At first glance, you wonder if this too is a remnant of times past. But a faintly lit neon sign and the yeasty aroma in the air are not figments of your imagination.

Inside, you'll be delighted with this throwback spot. Past the deli counter are rows and rows of specialty items, all imported from Italy - dried Rustichella d'Abruzzo pasta, Frantoia extra-virgin olive oil, white anchovies, sardines, olives, peppers, and the other essentials of the Italian table.

Owners Rick Micucci, 47; his wife, Anna, 38; and daughter Vanessa, 21, run the retail arm of a business established by Rick's parents, Leo and Iris, almost 60 years ago. Micucci's and St. Peter's Roman Catholic Church are all that remain of Portland's answer to Little Italy. The current site, purchased in 1965, is not the original. "It all started in the back of Rick's father's pickup truck," says Anna Micucci. Twenty years ago came the only other change: Rick's brothers, Bruce, Leo, and John, moved the store's wholesale operations to Riverside Street. They sell to many area restaurants.

Today, the retail store is linked with a new community. India Street is also home to Two Fat Cats Bakery (affiliated with the popular Fore Street restaurant) and Coffee by Design. Around the corner on Middle Street are Duck Fat - a small restaurant known for its incredibly rich Belgian-style fries - and Rabelais, an independent bookshop that is the local go-to place for volumes on cooking and home.

Last year, Micucci's opened a bakery in the back of the shop. Walk through the extensive selection of wines - perhaps snagging an inexpensive Chianti along the way - up a few steps, and around a corner to find a tiny brick-lined spot serving piping-hot slabs of Sicilian pizza. Baker Stephen Lanzalotta and his daughter, Shaia, turn out the pies beginning around 10 a.m. every day. Demand is so high that the senior Lanzalotta cannot take advance orders. When the bakers are between batches, they put out a folded paper plate noting the approximate time of the next pizzas. If you can't wait, try something from the freezer. "Frozolis," or frozen cannolis, and pizzelle ice cream sandwiches filled with cannoli cream are both made here.

Besides Micucci's, Portland is an appealing food destination, especially if you don't have to drive. Gas prices make the Concord Coach Lines bus from South Station directly to the Portland Transportation Center ($35 per round-trip ticket) quite appealing. (The Downeaster train goes from North Station to the Transportation Center. Same-day round-trip fare is $39 if tickets are purchased three days ahead.)

Road-weary travelers on a budget might consider the Inn at St. John, the city's oldest continuously operating hotel, blocks from the bus terminal, and a pleasant walk. Cozy, with a European feel, it has rooms that run as little as $100 per night during peak season. Part of the West End neighborhood, the inn is 1 1/2 miles from the Old Port District (where most tourist activity can be found); cab fare is less than $10.

Better yet, take another stroll, grab a seat at Micucci's, and wait for the next batch of pizzas to emerge from the ovens. After your walk, that and other temptations won't seem quite so indulgent.