Architect Philip Johnson’s own Glass House in New Canaan, Conn., may be the most sought-after house tour in the country. It is open from May through October, but to avoid disappointment this summer, resolve to reserve your tickets now (866-811-4111, www.philipjohnsonglasshouse.org). Left to the National Trust for Historic Preservation on Johnson’s death, the house was first opened to public tours in late June 2007. Johnson was notoriously careful about limiting visitors to his home, and many design professionals had literally been waiting a lifetime to crash the gate. Within days every available tour slot through 2008 was gobbled up. A maximum of 10 people at a time are allowed to tour the house, either in the 90-minute standard tour (no photos allowed; $30) or the two-hour extended tours (photography and sketching encouraged; $45). The National Trust has made the 47-acre campus the headquarters of its Preserve the Modern program as well as a testament to the vision of Johnson and his longtime companion David Whitney. The visit entails a half-mile tromp through the property with visits to the Glass House as well as separate painting and sculpture galleries. It’s like having tickets to the World Series of design. 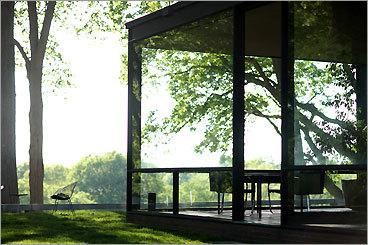