Resolved: Return to West Quoddy Station in Lubec, Maine, for at least three days, preferably a week, drinking in the Down East ocean views, savoring the peaceful setting, hiking coastal trails, and stargazing night skies. I stumbled upon this gem in 2007, spent one night, and have longed to return ever since. Bill Clark also knew a good thing when he saw it in 2000, although at that point the former US Coast Guard Lifesaving Station was in rough shape, having sat abandoned for nearly a decade. Clark, a nautical antiques dealer and former innkeeper, rescued the 5-acre property and transformed the 1917 Chatham-style Station House into a four-bedroom, 2Æ-bath rental house, the former boathouse into a lodge with two studio and two one-bedroom apartments, and the maintenance building into a one-room cabin. (Cabin and lodge $80-$126 per night, $500-$800 per week; Station House $180-$240, $1,200-$1,600. 877-535-4714, www.quoddyvacation.com.) The bluff-top site delivers sweeping views extending to distant East Quoddy Head Light on Campobello Island, New Brunswick. It’s less than a 1-mile stroll to either Quoddy Head State Park, with its candy-striped lighthouse and cliff-top trails, or to the beach at Carrying Place Cove. Since Lubec, the easternmost town in the country, fronts on Passamaquoddy Bay, site of the world’s biggest tides, there’s no better place to watch the sunrise or the tide turn. 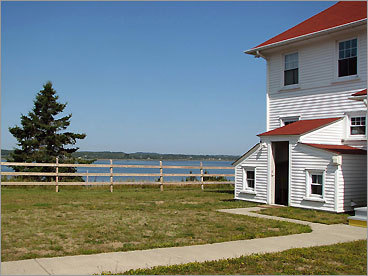