Core apples and cut into eight slices (do not peel); place in a heavy-bottomed stainless pot with the apple cider, and cook over medium-low heat, stirring frequently, until the apples are very soft. Puree the apples in a food processor and then push through a strainer to remove peel; place in a shallow baking dish and add the cardamom, cinnamon, and cloves. Bake in a 275-degree oven for 3 to 4 hours, stirring the mixture occasionally until it is quite thick and reduced by about a third. Strain again through a coarse strainer to remove the spice pieces, if you desire.

The apple butter is best served at room temperature; however, it should be stored in the refrigerator. It may be made a day or two ahead. The bread pudding may be made a day ahead and reheated in a 350-degree oven.

Part 4 of 4 To serve
Season the pork chops with a little pepper (do not salt) and grill or broil them until medium, about 4 minutes per side. Serve with squares of the bread pudding and the apple butter. 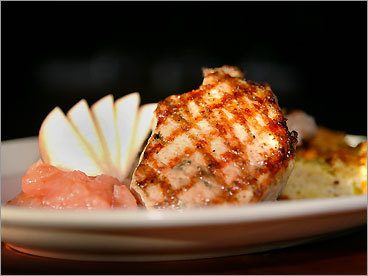