THIS STORY HAS BEEN FORMATTED FOR EASY PRINTING
Checking In 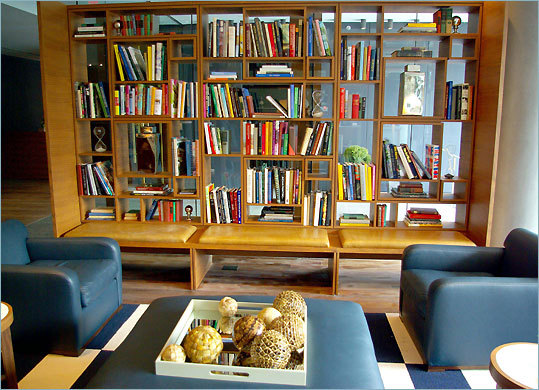 Comfortable leather armchairs in the lobby of The Study at Yale make an inviting spot to just hang out. (David Lyon for The Boston Globe)
By Patricia Harris and David Lyon Globe Correspondents / April 12, 2009
Text size – +

NEW HAVEN - When we finished checking in at The Study at Yale, the desk clerk handed each of us an electronic door key and a bookmark bearing the hotel logo: a pair of eyeglasses. It was the first hint that this lodging has a light-hearted attitude about its location amid the bustle of academic life.

In fact, the large lobby could easily pass as an upscale coffee shop. A wall of windows faces the Yale School of Art across the street and a tiny coffee bar (with good pastries) is tucked into one corner. As in any good coffee shop, guests tend to linger. There's a computer station available, but most people grab a spot on one of the deep couches or leather club chairs arranged into conversational groupings around ottomans that double as coffee tables. The tables are usually covered with newspapers and magazines, but for more ambitious reading, gorgeous art books fill a big bookcase.

Opened last October - just in time for Parents' Weekend - the Study transformed and expanded a tired 1960s-era lodging into a stylish boutique hotel. In contrast to its conventional brick neighbors, the Study's facade features an eight-story glass curtain wall, an openness that carries through the hotel as a design motif. Our standard queen room on the back of the building, for example, was actually rather small but a full wall of glass at one end made it seem spacious and bright. A built-in desk stretches the entire length of the window-wall, creating an inviting place to work while gazing out at New Haven rooftops. Free Internet access is available through a network plug at the desk or Wi-Fi everywhere else.

The room has all the right modern touches: a nicely engineered architect's lamp on the desk, a bigger version with a stylish contemporary shade as a floor lamp next to a leather chair and hassock, built-in reading lights in the headboard of the bed, and a clock radio with iPod docking station on a night table. The color scheme of beige walls with a sky blue accent wall combines with a soft linen comforter on the bed to create a soothing backdrop. The 42-inch flat screen television on a low dresser opposite the bed offers distraction from books and computers.

For even more distraction, the Study makes a good base for exploring Yale and the surrounding neighborhood. The Yale Repertory Theatre, Yale University Art Gallery, and the Yale Center for British Art are all in easy walking distance. Perhaps inspired by the modest display of Yale gear for sale in the hotel lobby, we stopped in the Yale visitors center opposite the orderly New Haven Green. Wall displays give a quick summary of university history, but we were most taken with Handsome Dan II, the taxidermied bulldog who had served as Yale's mascot in the 1930s.

The district is also full of trendy student-oriented shops, along with ethnic and fine-dining cafes and restaurants. But we suspect that Heirloom, the Study's stylish lobby-level restaurant, will soon become a favorite with parents and Yale poobahs entertaining visiting professors. On the evening that we dined here, a family of four was seated at a wooden table in the center of the room, a large group was clustered around banquette seating in a quiet corner, and a couple was enjoying a romantic meal at a cozy table by the window.

The restaurant's sharp wine list favors small producers, mostly from France, Spain, Italy, and California. Wines by the glass tend to come from the mid-price of the list, and during our visit included a couple of sparklers, a bracing Rueda among five whites, and a plummy Napa pinot noir among six reds. When we couldn't make up our minds, our server brought a couple of bottles from the bar and let us taste.

The American bistro dinner menu doesn't stray far from comfort food. One of us ordered roasted chicken with root vegetables and herb gnocchi, while the other chose pan-roasted snapper with papaya rice, bok choy, and vegetable jus. One was quintessential New England fare, while the other was only slightly exotic. (Note to kitchen: Unripe papaya is more a liability than an asset in the rice.) Thoughts of Handsome Dan II stopped us from ordering the Bulldog brownie for dessert. Instead, we split the soothing apple pear crisp. All in all, Heirloom delivers a better-than-average meal for a hotel service restaurant.

Then we headed back to our room to peruse a few more chapters before turning in.

The Study at Yale
1157 Chapel St., New Haven
203-503-3900, 866-930-1157
www.studyhotels.com
What we liked most: Large, well-designed workspace in the guest room.
What we liked least: Slightly awkward bathroom layout made it difficult to move around with the door open.
What surprised us: How smoothly everything was running when we visited about a month after the hotel opened.
You know you're at The Study at Yale when: The doormen wear hip-hop-inspired newsboy uniforms.
Rates: A refreshingly simple $249 for the slightly smaller queen-bedded rooms, or $279 for rooms with a king or two double beds. We paid $249 for Room 325. Heirloom serves breakfast, lunch, and dinner daily. Dinner entrees $18-$34.