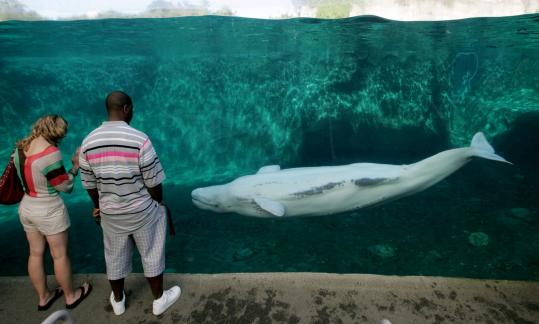 Visitors can get up close -- and even touch -- beluga whales at the the Mystic Aquarium & Institute for Exploration. (David Kameran/Globe Staff)
Email|Print| Text size – + By Sacha Pfeiffer Globe Staff / August 22, 2007

They're belugas, the small, ivory, melon-headed whales whose name means "white one" in Russian. They live at the Mystic Aquarium & Institute for Exploration, one of only a handful of facilities nationwide -- and the only one in the Northeast -- that house these distinctive animals. And visitors have a rare chance to connect with the trio through an unusual program that lets people enter the water, touch the whales, and even give the sociable creatures a "tongue pat."

The Mystic Aquarium has the country's largest outdoor beluga whale exhibit, called the "Alaskan Coast," with 750,000 gallons of water stretching over an acre. Designed to resemble the whales' native habitats of Alaska, Canada, Greenland, Norway, and Russia, the naturalistic facility has jagged rocks, glacial streams, and driftwood. It even has a shallow cobbled area where the belugas can haul themselves onshore to scratch their bodies, a process that helps them shed their skin during molting season, just as wild belugas do in rocky estuaries.

"They're a pretty unique species, and there are not a lot of belugas in the US," said Lynn Marcoux, the aquarium's senior trainer of belugas. "They really define who we are as a facility."

Among the smallest species of whale, belugas typically grow to about 15 feet long and weigh around 2,000 pounds, although some Russian males can reach 3,500 pounds. They have stout bodies, blunt heads, a small beak, short rounded flippers, and no dorsal fin, and their life expectancy is 25 to 35 years; the three belugas in Mystic are estimated to be 26 years old.

Inuk, a male whose name means "old man" in Inuit, has been on loan to the aquarium for seven years from the Point Defiance Zoo & Aquarium in Tacoma, Wash., as part of a "breeding loan" program. He will remain indefinitely. The two females, Kela ("gentle leader") and Naku ("the cross-eyed one"), are owned by the Mystic Aquarium.

In the past, Inuk sired two calves at Shedd Aquarium in Chicago, but he has yet to help produce a calf in Mystic. That may be because the window of opportunity for a female beluga to become pregnant is very small; most females ovulate only once or twice a year for one to two days at a time. In the wild, belugas often engage in mass breedings, in which multiple males breed with multiple females, greatly increasing the chance a female will become pregnant.

Since that isn't possible in Mystic, the aquarium is considering artificial insemination for its belugas, a technique that has been successful with dolphins and killer whales, Marcoux said.

Besides the Mystic, Chicago, and Tacoma aquariums, the other US facilities with belugas are the Georgia Aquarium in Atlanta and the three SeaWorlds in Orlando, San Diego, and San Antonio, according to Marcoux. There are estimated to be between 80,000 and 100,000 belugas in the wild, but in North America there are only about 20 to 25 belugas at zoos and aquariums.

In Mystic, the beluga trainers teach the whales to participate in their own health care by lying at the surface of the water to receive body exams, tooth brushings, X-rays, ultrasound readings, and urine and blood samplings. The whales are also trained to demonstrate behaviors so the public can see how they act in the wild, such as slapping their tails against the water, a form of communication.

Belugas also communicate vocally -- so much so that they have earned the nickname "sea canaries" due to their frequent high-pitched clicks, squeaks, squeals, and whistles.

The Mystic Aquarium's "beluga contact" program, which allows visitors to get into the water with the whales, is so popular that some participants have repeated it four or five times, Marcoux said. The 90-minute program, which includes 20 minutes in the water as well as preparation and wrap-up sessions, educates participants about belugas, teaches them animal etiquette, and schools them in wildlife conservation issues.

While in the water, visitors can run their hands along the belugas' bodies and put their hands inside the whales' mouths to give them a tongue pat. Tongue pats "seem to be one of their preferred forms of play," Marcoux explained, "and they even seek out tongue pats from us" by opening their mouths when trainers approach.

The contact program is "a really cool experience," said Marcoux. "When you put someone in the water for 20 minutes and they can touch and feel the belugas, it's a completely different experience than looking through the glass."

Sacha Pfeiffer can be reached at pfeiffer@globe.com.