A bridge not too far to admire

Camping, rafting, and rarest of gardens 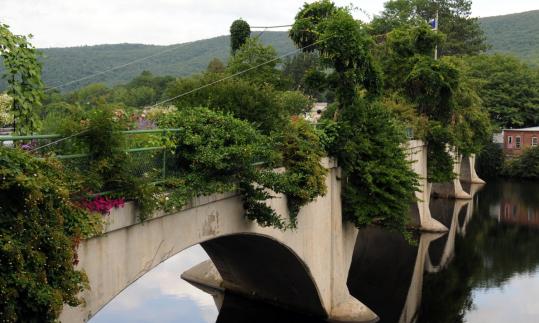 The Bridge of Flowers was conceived by a Shelburne Falls women’s group in 1929, the year after the bridge was no longer used to convey trolley cars across the Deerfield River. The 400-foot-long garden has bloomed spring to fall ever since. (DAVID ABEL/GLOBE STAFF)
By David Abel Globe Staff / September 29, 2010

Just off Route 2 about 2 1/2 hours northwest of Boston, straddling the Deerfield River, is a small town with a big lure. There are fine restaurants and a funky art scene. Nearby, there’s good camping and better white-water rafting. There are even peculiar geological formations. But the real draw is a bridge like no other. The century-old span was originally built to convey trolley cars across the Deerfield, but in 1929, it was converted into a 400-foot-long garden that eventually became known as the Bridge of Flowers, a meticulously maintained patch of floral glory that blooms from spring to fall and must rank among the state’s most alluring destinations.

STAY
There are bed-and-breakfasts throughout the area, most just a short drive from downtown Shelburne Falls. In nearby Charlemont, on a hill overlooking the Mohawk Trail, there are two well-maintained guest houses at the Warfield House Inn, which offer sweeping views, a large restaurant, and a petting zoo (200 Warfield Road, 888-339-8439, www.warfieldhouseinn.com, $90-$150). In the Mohawk Trail State Forest, there are 56 wooded campsites and six log cabins along the Cold River (175 Mohawk Trail/Route 2, 413-339-5504, www.mass.gov/dcr/parks/western/mhwk.htm, $12 for camping to $50 for cabins, which are open year-round).
DINE
There is a healthy range of choices despite Shelburne Falls’ size. There’s comfort food, candy shops, and fine dining. The best view of the Bridge of Flowers is from the West End Pub (16 State St., 413-625-6216, entrees $10-$15). The food is nothing spectacular, but the offerings of beer, burgers, and other bar food washes down well with the scenery, especially from the deck. Across the street is Mo’s Fudge Factor (9 State St., 413-625-6645, www.mosfudgefactor.com, $6.50 per half pound of fudge), which offers 10 varieties of homemade fudge, a 16-foot candy wall with more than 60 candy jars, and lots of ice cream, shakes, root beer floats, and sundaes featuring homemade hot fudge and caramel sauce. For a higher-end but relatively inexpensive meal, try Cafe Martin (24 Bridge St., 413-625-2795, web.me.com/swik/Cafe_Martin/About_Us.html, entrees $15-$25), a cozy, bright space with a few outdoor tables and an eclectic menu that includes hearty quesadillas and Gorgonzola garlic focaccia, carefully prepared salads, and a good veggie burrito among other vegetarian options. The most esteemed restaurant in town is the 12-table Gypsy Apple Bistro (65 Bridge St., 413-625-6345, entrees start at $22), where the menu changes every few weeks. Often it includes heavier fare such as filet mignon, rack of lamb, mussels, finishing with pear cobbler or a chocolate pot.
DURING THE DAY
The first thing to do is to stroll across the Bridge of Flowers, a narrow span built in 1908. After trolley service ended in 1928, residents began searching for another use for it. Within a year, a local women’s group came up with the idea of planting a garden along the span. The bridge, which was renovated in the 1980s, begins blooming in early spring with tulips and daffodils and ends the growing season in fall with mums. The bridge is free to cross, but donation boxes at each end are there to help the women’s group maintain its beauty (www.bridgeofflowersmass.org).

A short walk from the bridge are the Glacial Potholes at the base of Salmon Falls. The swimming pool-size holes were formed millions of years ago by glaciers from the last ice age. There are more than 50 potholes, from six inches to 39 feet in diameter. The pools were closed to swimming in 2002, but they are worth admiring from above.

For children and railroad buffs, there’s the Shelburne Falls Trolley Museum (14 Depot St., 413-625-9443, www.sftm.org, adults $3, children ages 6-12 $1.50), which houses the Shelburne Falls & Colrain Street Railway trolley car No. 10. The century-old car spent 65 years as a chicken coop and tool shed before being restored about a decade ago. Visitors can ride (along with a handcar and other railroad equipment) the No. 10 in the freight yard where it used to load passengers, mail, and other freight.

One of the biggest draws to the area is white-water rafting on the Deerfield. Several nearby companies, including Moxie Outdoor Adventures (1 Thunder Road, Charlemont, 800-866-6943, www.moxierafting.com) and Zoar Outdoor (7 Main St., Charlemont, 800-532-7483, www.zoaroutdoor.com), run trips ranging from Class IV rapids when the Fife Brook Dam opens to float trips on less adventurous portions of the river. Lunch is usually included and prices for the all-day, weekend trips run as much as $110.

AFTER DARK
For a little culture after braving the rapids, check out a Wagner opera or a Shakespeare play at the 112-year-old Memorial Hall (51 Bridge St., 413-625-3052, www.shelburnefallsmemorialhall.org), which seats 438 people. There are poetry readings, folk singers, and other intimate performances at Mocha Maya’s Coffee Pub & Music Venue (47 Bridge St., 413-625-6292, www.mochamayas.com).