Washington did sleep here, but not everywhere 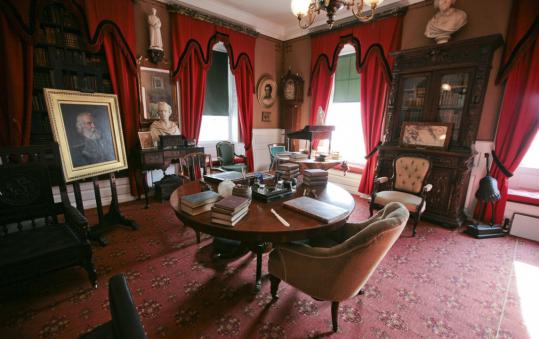 Before it became the Longfellow National Historic Site in Cambridge, this Brattle Street house hosted General George Washington in 1775 as he took command of the Continental Army. (Aram Boghosian for The Boston Globe)
By Christopher Klein Globe Correspondent / February 14, 2010

NEWBURYPORT - Biographies of George Washington line the shelves of libraries across the country. But the bookworms curling up with their Washingtonian tomes in the cozy reading room of the Newburyport Public Library have the rare opportunity to do more than just follow the life of our first president on the printed page. They can also follow in his immortal footsteps.

Long before the brick building on State Street became Newburyport’s library, it was a mansion owned by Nathaniel Tracy. On an October afternoon in 1789, the United States’ newly inaugurated president paraded into town to a soundtrack of beating drums, dismounted his white steed, and crossed the threshold of Tracy’s house, his accommodation for the night.

So, yes, the Newburyport Public Library can brag that “George Washington slept here.’’

It’s a boast so commonplace it has become a historical cliché and fodder for bawdy jokes. From all the tales, you would think old George was a regular rolling stone, a Colonial vagabond in a perpetual dreamland.

While the number of New England houses where the father of our country supposedly snoozed may seem even more plentiful than Dunkin’ Donuts shops, there are actually few homes and inns still standing with documented proof that Washington slumbered inside, and only a handful are open to the public.

Washington’s military service and presidential duties brought him to New England on several occasions. When he arrived in Cambridge to take command of the Continental Army in July 1775, Washington first lodged in the Wadsworth House, which still stands in Harvard Yard. Finding it inadequate for his military needs, Washington set up headquarters in a nearby Georgian mansion on “Tory Row’’ that had been abandoned by a family of Loyalists when the drums of war began to beat.

The glorious Brattle Street manse is best known today as the residence of another colossus, Henry Wadsworth Longfellow. But even at the height of the poet’s fame, strangers knocking on his door were much less interested in meeting the wordsmith than in getting a tour of Washington’s hallowed headquarters. Longfellow was in awe to be living in Washington’s old quarters, so he made few structural changes to the house.

Historians can’t be sure which of the Longfellow House’s second-floor bedrooms belonged to Washington, but he may not have gotten much sleep there anyway. No doubt he spent many nights agonizing over the daunting challenge of molding his makeshift army into a powerful fighting force.

Longfellow purchased many works of art depicting George and Martha Washington, and they are a presence throughout the house. A copy of Jean-Antoine Houdon’s bust of the president occupies a place of honor in the entry hall next to the Washington family coat of arms. Hanging on a bedroom wall underneath a portrait of Washington is a framed copy of a handwritten section of Longfellow’s poem “To a Child’’ that pays homage to the home’s former tenant.

Tours take visitors through the study where Washington plotted strategy with his war council and dined with patriots such as Benjamin Franklin and John Adams, and to the parlor where the Washingtons celebrated their 17th wedding anniversary.

After the British evacuated Boston in 1776, Washington headed south to New York. Along the way he spent a night at the small burgundy house of Stephen Hopkins, a Colonial governor of Rhode Island and signer of the Declaration of Independence. Today, the city of Providence surrounds the humble, L-shaped home near College Hill, but visitors to the Stephen Hopkins House can peer inside the second-floor bedchamber used by Washington, which still has its original paneling and floor.

Washington returned to Rhode Island in March 1781 to strategize in Newport with French general Comte de Rochambeau. Washington stayed at the grand Vernon House, Rochambeau’s headquarters. The mansion was recently donated to the Newport Restoration Foundation, which has a collection of more than 70 historic homes. It will remain a private residence, but the foundation will make it available to scholars.

Rochambeau and Washington met again two months later in Wethersfield, Conn., just south of Hartford, at the house of merchant Joseph Webb, which is open to the public as one of the Webb-Deane-Stevens Museum’s four historic properties.

The floors of the red clapboard house creak with the echoes of history. To the left of the entrance is the “Yorktown Parlor,’’ the room where Washington and Rochambeau planned the war’s final campaign, which climaxed five months later in the surrender of Cornwallis on a scarred Virginia battlefield.

Wallace Nutting, who owned the house in the early 1900s, had bright murals painted on the parlor walls depicting Washington in deep consultation with his staff and in heroic Yorktown battle scenes. Nutting took photographs of curious tourists in the parlor and brought them on a tour of the house for 25 cents.

The museum is concluding a state-of-the-art restoration of the second-floor bedroom where Washington spent five nights. The renovation will give visitors the best opportunity in New England to see one of Washington’s bedchambers in a state similar to that when the towering founding father first ducked through the doorway. The restoration included stripping the floorboard stain to reveal the bare wood, returning the faux cedar graining to the woodwork, re-creating the original paint finishes, and installing a reproduction of the room’s 1760s wallpaper to highlight its original vivid colors.

Washington’s 1781 visit to Wethersfield was not his first. Six years before, he had dined next door at the home of Silas Deane, a Continental Congress delegate and diplomat to France. Visitors to the house will see the parlor set much as it was in preparation for Washington’s arrival with food laid out on tables in front of the brownstone fireplace.

Luckily for us, Washington recorded some of his travel experiences and itineraries in his diary. Like a Colonial TripAdvisor, he reviewed the quality of some of the public houses he visited. (He wrote that Watertown’s Coolidge Tavern was a “very indifferent one.’’ Ouch.) In a sentiment that’s still shared by some modern-day travelers navigating our crazy thoroughfares, he also vented about the quality of New England’s roads and the inability of locals to give proper directions, writing in one 1789 entry about Massachusetts that “the roads in every part of this state are amazingly crooked . . . and the directions you receive from the people equally blind and ignorant.’’

Unfortunately for historians, Washington didn’t jot down the name of every place he bunked. It’s easier to know whether Washington paid a visit to a particular house, but more difficult to verify whether he spent the night. For example, the town of Fairfield, Conn., is completing restoration of the Sun Tavern on the village green. It’s known that Washington visited Fairfield on multiple occasions, but local historians can’t say for sure that he stayed in the Colonial tavern, which is open to the public on occasion.

Then, there are places like the Brookfield Inn in central Massachusetts, which can claim that Washington almost slept there. According to the legendary story, the keeper of the Brookfield Inn, suffering from migraines and unaware of the identity of her visitors waiting outside, sent word to turn away Washington’s entourage on his 1789 presidential visit. After learning the identity of her callers, the innkeeper was devastated, but it was to the benefit of the innkeeper in nearby Spencer, where Washington spent the night. Spencer is forever indebted to the poor Brookfield innkeeper because it can boast that “Washington slept here.’’