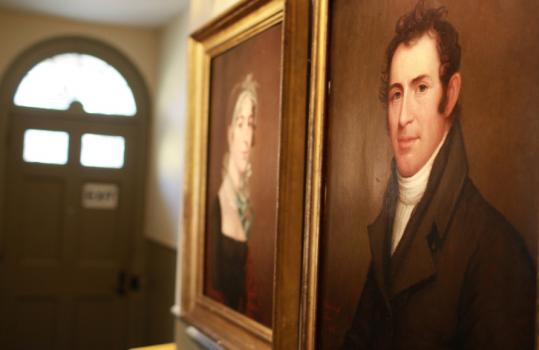 The Jackson Homestead and Museum in Newton and exterior of the former Lewis Hayden home in Boston. (Photos By Jonathan Wiggs/Globe Staff)
By Christopher Klein Globe Correspondent / February 7, 2010

For thousands of African-Americans fleeing the bonds of slavery in antebellum America, the escape routes of the Underground Railroad that crisscrossed New England were lifelines to liberty. In the decades leading up to the Civil War, a countless number of clandestine “stations’’ were part of the informal network of safe havens for runaway slaves.

Brave men and women among New England’s ardent abolitionists, free blacks, and religious leaders offered food, shelter, and, most important, a chance to fulfill dreams of freedom. Numbers of those houses still stand and a select few open their doors to the public.

The secretive nature of the Underground Railroad, which was necessary to protect freedom seekers and their abettors (particularly after the passage of the Fugitive Slave Act of 1850), means that written records are scarce. That can make it difficult to know whether oral traditions surrounding purported sites are accurate, or simply legend.

The National Park Service established the National Underground Railroad Network to Freedom Program in 1998, in part to assist with the verification and preservation of sites. To be included in the network, sites must document their connection, and more than 400 historical sites, research facilities, and educational programs, including 23 in New England, are members.

As with many covert organizations from the pages of history, the Underground Railroad continues to capture the public imagination. But, despite its subterranean moniker and romantic lore, don’t expect to see secret tunnels and hidden passageways behind bookcases inside former stations.

“Some places certainly have underground passages, but they were not always used for the Underground Railroad,’’ says Sheri Jackson, the Network to Freedom’s northeast regional coordinator. “Particularly in large houses, those rooms could have been used for cold storage or a wine cellar. We try not to focus on the tunnels but on the people. These were people who had to make a decision to leave their families and go to the unknown.’’

The Jackson Homestead and Museum in Newton was among the first 10 sites included in the Network to Freedom. The 1809 Federal-style house was once home to William Jackson, an entrepreneur, congressman, and fervent abolitionist, and is open year-round as headquarters of the Newton Historical Society and a museum dedicated to the city’s history and the Jackson family. A handwritten journal, which is still in the homestead’s possession, penned by one of Jackson’s daughters in 1895, describes the harboring of at least one freedom seeker in the house. A basement room includes an exhibit on the antislavery movement, but its most interesting feature is a dry well that, according to the Jackson family’s oral tradition, was used to hide freedom seekers in danger of being found. 527 Washington St., 617-796-1450, www.ci.newton.ma.us/jackson

The Wayside in Concord is best known as the former residence of Nathaniel Hawthorne and the childhood home of Louisa May Alcott, but it also served as a station. The Alcotts were dedicated abolitionists who sheltered a pair of freedom seekers in the Wayside in early 1847, an episode that affected the writings of the budding author. Another Concord literary giant, Henry David Thoreau, gave lodging to a runaway in his Main Street house, which is among six Underground Railroad stations identified on a self-guided map produced by the town’s Drinking Gourd Project (available at drinkinggourd.cchumanrights.org). 455 Lexington Road, 978-318-7863, www.nps.gov/mima

Nestled in the rolling countryside near Lake Champlain, the Rokeby Museum tells the story of four generations of the Robinson family who lived on the 90-acre farm, including Rowland and Rachel Robinson, who were devout Quakers and antislavery leaders in Vermont. The family’s extensive collection of correspondence details the harboring of freedom seekers on the farm in the 1830s and ’40s. “The letters tell us that Vermont was quite a safe haven,’’ says Jane Williamson, museum director. “It was so far from the South that we have yet to document a case of anyone coming after a slave in Vermont, so fugitives would stay not just for a night, but for long periods.’’ 4334 Route 7, Ferrisburgh, 802-877-3406, www.rokeby.org

Houses of worship were natural sanctuaries. While documentation is lacking, according to oral tradition historic Touro Synagogue in Newport, R.I., provided shelter to freedom seekers when it was in the hands of a Quaker caretaker before the Civil War. The trap door on the platform where the rabbi leads services in America’s oldest synagogue may appear to have been a possible escape hatch for runaway slaves, but it’s strictly a symbolic architectural detail.85 Touro St., 401-847-4794, www.tourosynagogue.org

Portland, Maine’s, Abyssinian Meeting House was the center of life for the city’s African-American population in the 1800s, and the preachers and congregation actively participated in hiding, financing, and transporting freedom seekers. The meetinghouse, built by free blacks in 1828, is undergoing extensive renovation, and it’s one of 16 stops on the recently inaugurated Portland Freedom Trail. Because it is close to Canada and located on rail and sea routes, Portland was a hub on the Underground Railroad, and the walking tour includes markers at safe havens and other locations associated with the antislavery movement. 207-591-9980, www.portlandfreedomtrail.org

Boston’s Black Heritage Trail winds past 14 Beacon Hill buildings and sites related to the neighborhood’s African-American heritage and abolitionist movement. Tours take visitors past the Phillips Street house that was used by Lewis and Harriet Hayden, themselves former slaves, to shelter perhaps hundreds of freedom seekers. Lewis Hayden reportedly stored gunpowder kegs under the front stoop and warned bounty hunters they would be blown up if they crossed the threshold. 617-742-5415, www.nps.gov/boaf

The bustling port of New Bedford was also a refuge for hundreds of freedom seekers, some of whom arrived on the docks as stowaways. The New Bedford Whaling National Historical Park offers a brochure with a self-guided walking tour of Underground Railroad sites around the city’s waterfront. A penniless Frederick Douglass, perhaps the country’s most famous former slave, was taken in on his escape from Maryland in 1838 by Nathan and Mary “Polly’’ Johnson, black business owners who were among the city’s most active abolitionists. The Johnsons’ house at 21 Seventh St. is now home to the New Bedford Historical Society. 508-996-4095, www.nps.gov/nebe

The small town of Farmington, Conn., which gained fame in 1841 for offering a home to the African survivors of the Amistad rebellion, played a large role in the Underground Railroad, earning it a nickname as the network’s “Grand Central Station.’’ Farmington had at least eight stations, and the Farmington Freedom Trail, part of the larger Connecticut Freedom Trail, encompasses some of those homes as well as the town’s Amistad-related sites. The Farmington Historical Society conducts tours by appointment. 860-678-1645, www.farmingtonhistoricalsociety-ct.org

The David Ruggles Center for Early Florence History and Underground Railroad Studies is one of the newest additions to the Network to Freedom. The research center and museum, scheduled to be unveiled on Memorial Day weekend, will feature exhibits dedicated to the founding of the Northampton village as a commune of utopians and radical abolitionists in the 1840s, the Underground Railroad, and Florence’s prominent abolitionists such as Ruggles, who helped an estimated 600 runaways find freedom. The center’s website has a map of Florence’s African-American Heritage Trail, which includes houses that were Underground Railroad stations and a statue of Sojourner Truth, a village resident who had been a slave and became a leading abolitionist. Guided tours are offered on the second Saturday of the month between May and November. 225 Nonotuck St., www.davidrugglescenter.org

(Additional Underground Railroad sites can be found at the Network to Freedom website, www.nps.gov/history/ugrr.)