10 places to bask in barbecue 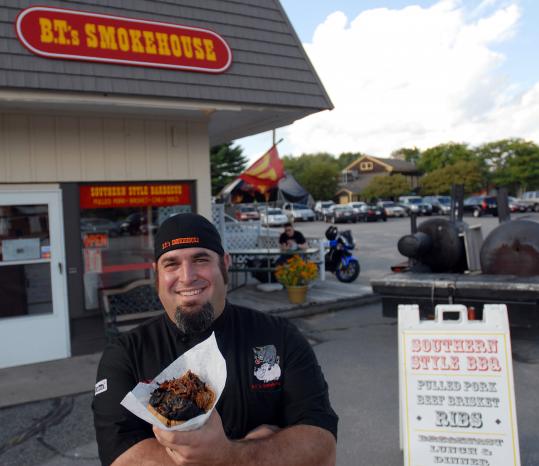 Contrary to myth, you need neither a bluetick hound nor a pickup truck to enjoy eating Southern barbecue. Nor need you drive down an unnamed road in rural Mississippi to find it.

Thanks to tireless proselytizing by the New England Barbecue Society and the presence of some talented pit masters in our midst, the land of the bean and the cod is now dotted with great joints serving meat cooked ever so slowly by the indirect heat of a smoky wood or charcoal fire. Greater Boston is blessed with a number of superb barbecue venues, but you won’t have to forsake a heap of pulled pork or a plate of burnt ends when you light out for the territory. Here’s a guide to 10 of New England’s smokiest grills.

The Cookhouse Every New England pit master has a story of how he came to serve what Rob Ryder, owner of the Cookhouse, calls “America’s favorite country food.’’ In business since May 1997, Ryder says, “I grew up with my dad on the grill.’’ In honor of his father, Thomas, “a real Southern country gentleman’’ of significant girth, Ryder calls his meats “Fat Tommy’s Slo-Smoked Barbecue.’’ Although the Cookhouse prepares two styles of pork ribs (baby backs and the meatier St. Louis cut slab), the signature barbecue is a tomato-based pulled pork. “We smoke whole pork butts, pull the meat, and let people choose their sauce when we serve it,’’ Ryder explains. “We offer a Carolina vinegar sauce, but most people go for the tomato.’’ 31 Danbury Road, New Milford, Conn. 860-355-4111, www.thecookhouse.com. Open daily for lunch and dinner. $8.99-$22.99.

Chester’s Barbecue Chester Dugas may be Connecticut-born, but his taste buds came alive during years as a journeyman cook and sometime blues musician along the Memphis-Chicago axis. Southerners stationed at Navy and Coast Guard bases in the New London-Groton area hanker for down-home food, and Dugas aims to please. Something of a purist, his trademarked motto states his position on wet versus dry: “Barbecue is not the sauce. It’s what the sauce goes on.’’ His smoking operations have been so successful that he recently opened a large restaurant in a shopping center to augment the tiny three-seat brick shack in downtown New London. His signature meat is beef brisket, slow-smoked for 12-15 hours.

United BBQ A relative newcomer (it opened in November), United has flourished in the down economy. Chef-manager Nat Hughes attributes the success to offering “lots of food for little money, which as a father of two I know I appreciate.’’ The gas-fired hickory log rotisserie smoker also makes a difference. “Smoking barbecue is a lot like braising,’’ says Hughes, who came to barbecue from a career in fine dining. Like many New England pit masters, Hughes has an eclectic style, making Carolina pulled pork, Texas-style brisket, and Memphis-style pork rib racks. Purists might be aghast, but Hughes also makes vegetarian barbecue (Tofurkey kielbasa and dry-rub seitan, or wheat gluten). “We’re in an area with a lot of students,’’ he explains, “so we try to look out for the vegans. We make sure the seitan never touches the meat.’’ 146 Ives St., Providence, 401-751-9000, www.unitedbbq.com. Open Tuesday-Sunday for lunch and dinner. $4.99-$18.

Smoke ’n Bones BBQ Diana and Jono Osburn have been feeding smoked barbecue to the hungry masses on Martha’s Vineyard for 11 seasons, “refining the boundaries of Southern cuisine,’’ as they put it. (Smoke ’n Bones operates out of Key West over the winter.) The Methodist campground in Oak Bluffs brings in a lot of Southern barbecue fans, and most plates are large and designed for sharing. “You can feed a family of four for under $50,’’ Diana says. “Where else can you do that on Martha’s Vineyard?’’ The signature barbecue here is a toss-up between the baby back ribs and the Memphis-style slabs of spare ribs. The Osburns can barely keep up with orders of their weekend special of barbecued prime rib of beef. Dining is an outdoor affair in “the boneyard’’ next to the shack, where big buckets are left on the tables to toss the scraps. 20 Oakland Ave., Oak Bluffs. 508-696-7427, www.smokenbonesmv.com. Open daily for dinner April-Columbus Day. $15.95-$23.95.

BT’s Smokehouse Southern Style BBQ Maybe it has something to do with his Culinary Institute of America training, but Brian Treitman is fanatical about creating an intense flavor profile in his barbecue, principally using a dry rub technique for poultry (his smoked turkey is a big hit around Thanksgiving), pork, and beef. Treitman’s rub is one of the most aggressive around, packed with a substantial chili pepper punch. Although you can order pork ribs “naked’’ (without sauce), he usually simmers them in a spicy, sweet sauce after taking them out of the smoker. The main location in Brimfield is inside a campground (more or less a trailer park) on Route 20; Treitman also maintains a satellite “Snack Shack’’ with an abbreviated menu next to Yankee Liquors in Sturbridge.

Curtis’ Bar-B-Q “Back in the hippie days,’’ drawls Curtis Tuff, “I was the guy who’d dig a pit and cook whole pigs for the parties and the concerts.’’ The flower children may be gone (well, mostly gone in Putney), but Tuff hangs on. The pioneer of New England Southern barbecue is in his 41st year of cooking and serving pit-smoked chicken and ribs from roadside digs just south of town. Service is from a blue school bus, and the seating is outdoor picnic style. While many New England barbecue cooks use closed-container smokers, Tuff works a powerfully smoky grill over an open pit. A stop here is a ritual for many out-of-staters. As folks pack up their trash and head to their cars, they usually pause to bid Tuff adieu. “See you next year!’’ they always exclaim. “Next year!’’ he always agrees.

Moat Mountain Smokehouse & Brewing Co. Beer and barbecue are natural partners, so it’s no surprise that co-owner Steve Johnson acknowledges that “barbecue was always key to our concept’’ since his ski-country brew pub opened nine years ago. The menu has grown to embrace a number of un-Southern items (a line of wood-grilled pizzas, for example), but St. Louis ribs and pulled pork remain staples. Johnson’s favorite is the Texas-style brisket smoked for 14 hours with cottonwood and served with a spicy Austin sauce that gets its kick from mustard and horseradish. The barbecue is all dry-rubbed before cooking, but Moat Mountain serves it all “wet,’’ i.e., chopped and mixed with sauce. 3378 White Mountain Highway (Route 16), North Conway, N.H. 603-356-6381, www.moatmountain.com. Open daily for lunch and dinner. $8.99-$21.99.

Muddy River Smokehouse Muddy River serves all its barbecue with a sweet, tangy sauce as well, which is a pretty fair complement to the brown-sugar-based dry rub. Some spice purists consider the heavy sugar a misstep, but it guarantees a distinctive pink “smoke ring’’ around the edges. Baby back ribs are the best seller here, but don’t miss the unusual house special of battered and deep-fried pickles.

Buck’s Naked BBQ The barbecue at Buck’s has just as pronounced a smoke ring, but sauces come on the side. That’s because owners Alex and Wendy Caisse are hard-core barbecue purists. “Most places slather the plate with sauce,’’ says Alex, “and you can’t taste the meat. We make what I call ‘righteous’ barbecue, which takes time.’’ Indeed, the cooking starts around 4 a.m. in Freeport, since chickens smoke for about three hours and brisket up to 13. Already somewhat notorious for its name (“Buck’’ is a cartoon pig mascot), Buck’s Naked BBQ turned a lot of heads in August when Caisse and crew barbecued lobster in a benefit for the state lobster promotion board. “We parboiled the lobsters and then finished them in the smoker so the smoke wouldn’t overwhelm the delicate meat,’’ he says. “They were so good that we’ll be offering them as a special on the weekends.’’ 568 Route 1, Freeport, Maine. 207-865-0600, www.bucksnaked-bbq.com. Open daily for lunch, dinner. $8.50-$24.99.

BBQ Bob’s “Real Pit’’ BBQ When Bob Ballou played in a blues band back in the day, a band mate nicknamed him “BBQ Bob’’ after the legendary Georgia country blues singer. The name stuck, even if Ballou gave up music after 13 years because “with kids to take care of, it didn’t exactly pay the bills.’’ A bigger than life character, he’s been a pit master ever since, setting up in an orange trailer next to The Good Food Store nearly four years ago. Ballou keeps it simple: chicken, pulled pork, whole slabs of pork ribs, and a brisket rubbed with mustard seed, garlic, ground chili peppers, and just a little salt. “I cook it overnight for around 16 hours so it’s black and ugly on the outside and tender and juicy inside,’’ he explains. “One of my customers from Oklahoma came up with the slogan, ‘You don’t need teeth to eat our beef.’ Some of my older regulars will back that up.’’

Patricia Harris & David Lyon can be reached at harris.lyon@ verizon.net.