Bent on conserving their energies 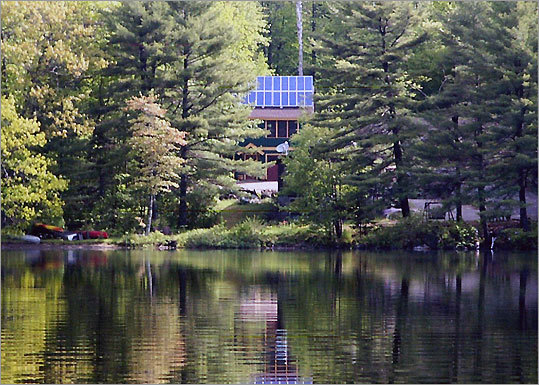 When they lie down at night, most travelers off the beaten path hope for little more than a warm bed and a hot breakfast at a pleasant bend in the road. But a growing number of visitors to New England's quieter corners are also looking to learn about solar-powered living, and a growing number of inns are springing up to serve them.

For example, when Vivian Berlin was headed to Western Massachusetts for a brief getaway last August, she sought space at Starlight Llama Bed and Breakfast in Florence, where innkeepers John Clapp and Dee Boyle-Clapp meet their energy needs by combining conservation with solar panels.

"I figured it would be a different kind of experience, and I might learn something. And I did," said Berlin, an Arlington resident.

But she didn't learn it at Starlight Llama, which was booked. The Clapps referred her to Inn Nature, an earth-sheltered concrete home just down the road in Chesterfield, which also is off the electrical grid.

"Sarah [Prince, the owner] took me up on the roof, showed me the solar panels, and described the solar-heated water system. It certainly has me thinking of how I can do that in my own home," Berlin said.

When Prince built her three-bedroom home into a hillside in 2007, she wasn't intending to operate a B&B. Its design, which incorporates a 48-volt so lar electrical system, grew out of a desire for something unusual combined with "serious eco-consciousness," she said.

But then a "need to be able to pay taxes" led her to christen her home Inn Nature and open it to the public in May. Prince's roof, covered with four feet of soil and turf, becomes part of the high side of the hill. She concedes that "it is kind of strange to drive up and see this big pile of dirt, but it's interesting to live in it."

Wayne Crump from Gaithersburg, Md., came to town to attend a hospice fund-raiser. During his visit, he said, a great thunderstorm roiled the outdoors but "we hardly felt a vibration inside."

"Sarah made the comment that she feels safe there, like in a womb, and I said, 'Yes, it's a womb with a view,' " he deadpanned. The vista includes Prince's organic gardens.

An intangible of a different sort is beginning to lead travelers to Williams Pond Lodge in Bucksport, Maine. "There's a lot of romance involved in the idea of a Maine camp in the woods, on the pond," said David Weeda, who opened the lodge in October with his partner, Dominick Rizzo. "Throw in the added ingredient of off the grid, and you can really enjoy the ambience of being so close to nature."

Though Weeda and Rizzo were intent on living sustainably when they left Cape Cod in search of a Maine inn to operate, their decision to go solar had a practical component. "We would have had to bring wire down the road way too far, 3,000 feet. When you compare that to solar, it was the obvious best choice."

Their green choices mean the exclusion of paper plates, cups, even paper napkins. Toiletries flow from bulk dispensers, and the bar soap is handmade locally and not individually packaged.

Though each inn experience is different, innkeepers say their choice of solar over coal-fired utility power has little practical effect on guest stays. For example, Williams Pond guests don't have TV in their rooms, but they can access satellite-linked Internet using Wi-Fi, or watch a tape or DVD in the library.

Greg Dunn, vice president for insights at Ypartnership, a travel industry analyst in Orlando, Fla., said the phenomenon of off-the-grid inns is slowly growing, rooted in the owners' commitment to sustainable living and/or their desire to beat high energy costs.

He said their polling shows that 85 percent of active leisure travelers claim an environmental commitment, and that more than half want to patronize vendors who share the view. But, Dunn added, there is not much tolerance for having to pay more to travel green.

The sustainability lifestyle at Starlight Llama includes not only solar power and diligent conservation but also a menagerie, some of whom work for their board: The Clapps recently added another 10 laying hens to keep up with inn demand and have a donkey, goats, emus, guinea fowl, and, of course, llamas.

"Most of them are rescues. The reason we have them is that we wanted them, but they're also a nice draw for the B&B," said Boyle-Clapp. "It's fun to wake up to crowing roosters and emus' 'drumming,' " a deep, percussive sound "like an African drum."

But Boyle-Clapp said her guests also are eager to learn. "People say all the time that they didn't know about phantom loads," the term for home devices that draw power even when they're not in use, such as cellphone chargers and televisions. The US Energy Information Administration estimates that as much as 20 percent of home electricity is spent that way.

Another example Boyle-Clapp gives is the cost of the inn's solar installation. "They've been told solar power is untouchable, and we tell them, this is how much it cost us": about $11,000, for panels, batteries, and electronic controls.

"We have wonderful conversations at breakfast," she said.

Michael Prager can be reached at marbs@michaelprager.com.